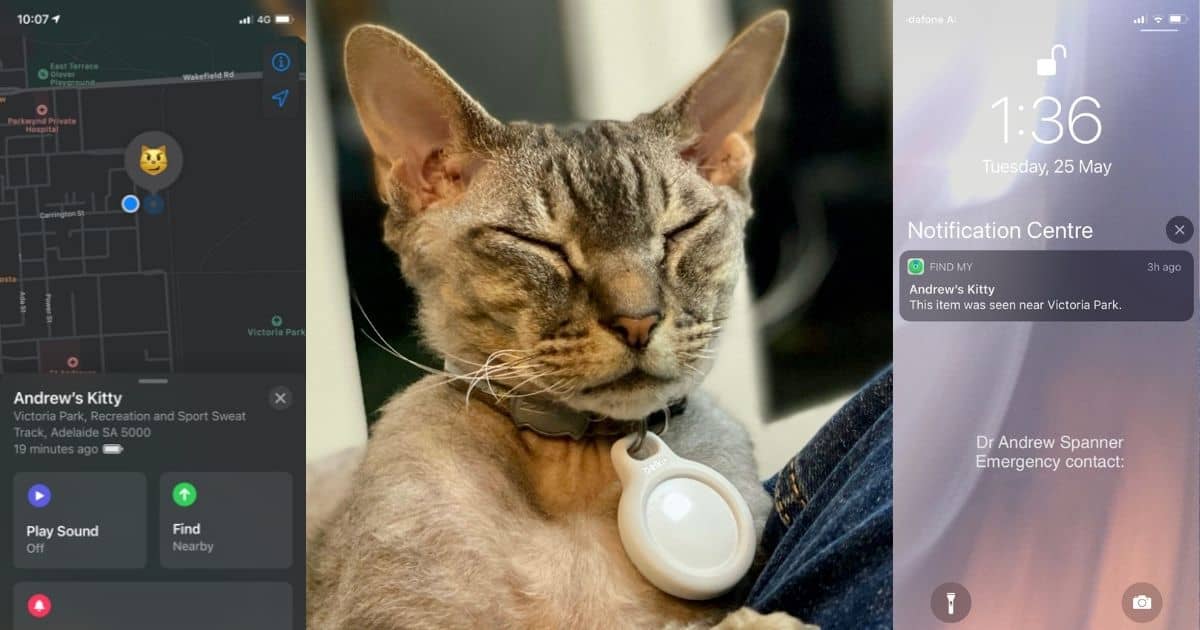 Like most kitties these days, my cat is supposed to be indoors. I say supposed, because despite my best efforts, he does not always agree.

Fast asleep he may appear, but as soon as a door or window opens, up comes his periscope head. If you aren’t quick enough, or the lock doesn’t click, he’s gone. Next thing, the whole family is out with torches (not the flaming kind but it feels that way) until he’s found and returned.

We do this because outdoor cats run a high risk of road trauma, fight abscesses and FIV infection. But sometimes he’s impossible to find. So I’ve always been interested in smart tech to help me, and recently I invested in an AirTag.

However, it may not be the best option.

Here’s a summary of the cat trackers available in Australia and their pros and cons. Please note that microchips do not have any tracking ability and must be actively scanned by a hand-held reader.

These are devices that use satellites to fix your cat’s position to within metres. The signal is then usually sent back to your phone via a sim card and mobile phone connection. Therefore you need to make sure that anything you buy will work in the country where you live.

These trackers use a downloadable app and the bluetooth signal on your smartphone to locate your pet. The tracker is located in one of two ways:

Apple’s tracker also uses bluetooth. It shares the same pros and cons as Tile and other bluetooth trackers, with one important exception: there are many more users. When marked as ‘lost’ it is picked up by iPhones within range using the Find My feature and a signal is sent back to your phone.

AirTag can be used with non-Apple phones as well. An iPhone user who finds it can also tap it to reveal contact information.

Here are my personal experiences:

My cat has escaped once. The AirTag pinged off a neighbour’s phone. However, until I marked him as ‘lost’ the notifications were only if I opened and checked the FindMy app.

He didn’t ping again and waltzed back home an hour later. The AirTag didn’t help find him but did confirm that he had escaped. So a partial success.

An Apple update since release means that AirTags now beep at a random time between eight and 24 hours when separated from an iPhone. This is to prevent them being used for stalking, but it has the unintended consequence of your cat beeping unexpectedly.

How much this bothers them I cannot say but I would definitely warn anyone who looks after your cat while you are away, especially cattery owners.

Apple are also releasing an Android app later in 2021 so that the tags can be detected by non-iPhone users.

I bought the ‘Belkin Secure Holder with Keyring for AirTag’ for $20. The supplied keyring is too big so I replaced it with a small one and it hangs well at my cat’s neck without too much swinging.

The holder can be written on but writing tends to rub off. I plan to lightly engrave the plastic with my phone number and address instead. I’m avoiding engraving the AirTag itself until it’s out of warranty (Apple offer free engraving but only four characters or emojis).

I have seen special cat collars with inserts for AirTag available online but have no idea how secure or comfortable they are.

Is The AirTag Worth Buying For Cats?

Although the AirTag is not designed for tracking cats and has many serious flaws, it is inexpensive and well-tolerated. As long as people understand what it cannot do, its great advantage is being detectable by the large number of iPhone users in your suburb.

If your cat goes outside regularly, and you want to know where they go, a GPS tracker would be a much better option. As a backup system for an indoor cat, my view is that it’s a worthwhile investment.

But my golly, how grateful will I be for your views (in the comments below) if you use any trackers!

Disclaimer: I’m no tech-head and could have made some basic errors so please don’t rely solely on this information! Perhaps I should stick to my day job instead…

Now read: Why Slamming The Door On Cats Is A Bad Idea

11 Replies to “A Review Of Apple’s AirTag To Find My Cat!”