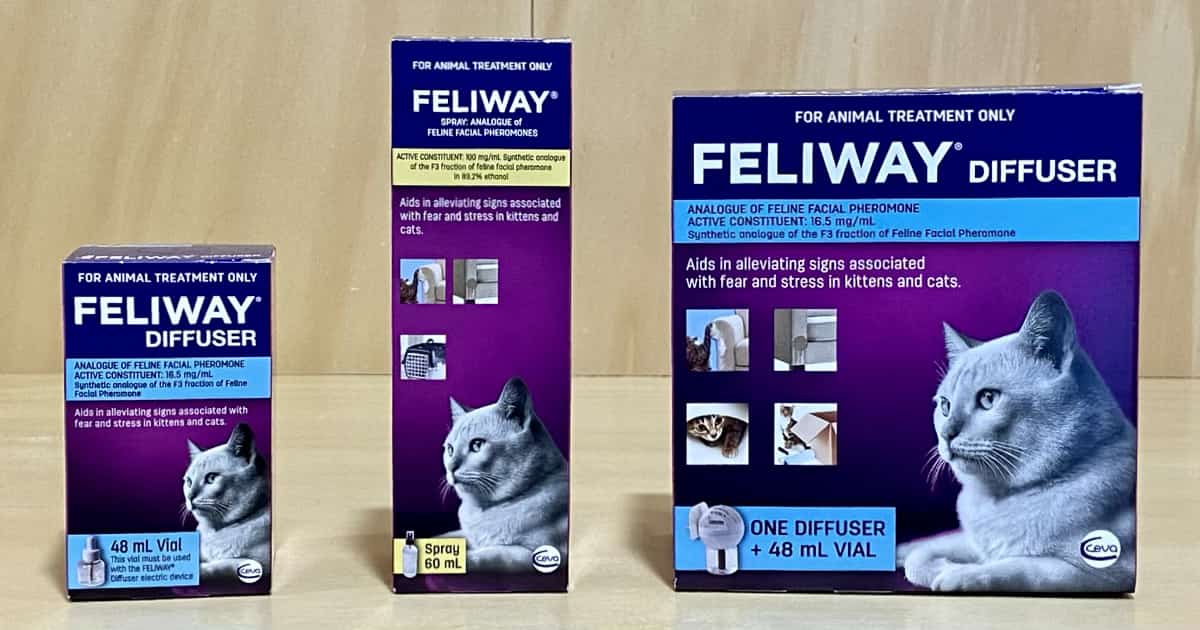 For nearly my whole career, I have used and recommended Feliway® for situations involving feline anxiety and stress. These might be urine spraying, inter-cat aggression, or even trips to the vet and cattery.

I have always been reassured that there is strong scientific evidence for its effectiveness. So it took until 2021 for me to do a thorough literature review of my own. I was shocked by what I found.

It’s not that Feliway doesn’t work at all. It’s just that it probably doesn’t work for most of the things it’s been promoted for.

Although its exact composition is a trade secret, Feliway is said to be a synthetic analog of the substances that cats release from their chin glands. It’s supposed to produce a sense of security and calm when released.

Feliway is available both as a plug-in room diffuser that lasts around a month, and a spray for short term immediate effect.

Let’s now go through each of its three main indications and look at the evidence with a critical eye.

Urine marking in cats is often a sign of stress or anxiety, as you can read here. It’s also an incredibly frustrating condition to treat. So it’s no surprise that four published Feliway studies address this topic.

Two should be immediately rejected due to the lack of a placebo group (you’ll see why in a minute).

Of the two remaining, one6 looked at the effect of Feliway on cystitis. Perhaps unsurprisingly, they found no benefit.

The other8 is the only placebo-controlled study to find that the use of Feliway was associated with a reduction in urine spraying. Sounds great, right? Actually no.

You’re about to see why it’s not good enough to just look at any study’s summary – you have to look inside.

Problems With The Study

These findings were based on only 10 treated cats, But it gets worse. If you read the paper you quickly discover that the treatment group and the placebo group were not equal, something that’s essential for comparison.

This matters, because as outlined above, cats with cystitis would probably not respond to treatment.

A third issue is transparency of data. 25 cats were enrolled into the study but three of them were excluded from the final analysis with no explanation as to why. Drop outs from any drug trial always need to be watched closely as these are often treatment failures. Especially when you’re down to ten cats.

I also want to share their data in a graphical form to show you the caregiver placebo effect in action. There’s actually a significant improvement from baseline in the group treated with placebo!

Hands up who enjoys taking the cat to the vet. Nobody? How surprising.

Kittens usually have a wow of a time whatever they do, but once cats grow up they become territorial and don’t like leaving familiar spaces. A trip to the vet or cattery at this age is usually a highly stressful experience. Anything we can do to help is a good thing.

Four published placebo-controlled studies look at stress in cats at the vet.

Kronen et al7found that cats who were sedated and exposed to Feliway had head positions and positions in the cage suggesting lower stress than cats sedated without Feliway. There was no difference in how easy they were to handle.

Griffith et al5 claim to show that Feliway is associated with reduced veterinary stress but I beg to differ.

They state that observing more grooming and interest in food indicates lower stress, despite the Feliway cats having slept significantly less and eaten no more. I regard sleeping as a much more important sign of low stress and wonder why they don’t.

By the way, actual food intake (which is a good measure) was significantly greater when they put a cat carrier in the cage for the cats to hide in. It just goes to show that reducing stress isn’t all about pharmaceuticals.

Conti et al3 measured parameters including respiratory rate, heart rate, blood pressure, and behaviour such as struggling, crying and agitation during handling both at home and at the veterinary hospital. They found that exposure to Feliway did not reduce the effects of stress.

I must apologise to my poor wife for the number of times I incredulously read out choice sections from this study9. It is one of the most influential works on the treatment of stress with Feliway, but it is fatally flawed.

Firstly I would like a good explanation for why one of the study authors was employed by the pharmaceutical company. And this: “Ceva Santé Animale was secondarily contacted for advice into the study design and contributed to the writing of the paper”. Huh??

Secondly, I would ask why their introductory literature review relies so heavily on non-peer reviewed sources that few others can read.

But most importantly, I would ask why their treatment and placebo groups are so strikingly different. Median age in the 29 Feliway spray cats was 1.5 years versus 4.5 years in the 25 placebo cats. This is such a complete failure of randomisation it makes me wonder how they did it.

Now any fool knows that a median age of 1.5 years will include plenty of kittens, and that kittens don’t get nearly as stressed at the vet as adults. But if you don’t believe me look at this data from a large behavioural study1.

What you see here are two different peaks: the dark bars are regular cats going to the vet for any reason, and the light bars are cats going for behavioural reasons. This isn’t quite the same thing, but it shows that you can’t compare cats of different ages on a behavioural basis.

As much as I think the results are meaningless, the study found lower stress scores in the Feliway treated cats, and owners who described their cat as ‘easier to handle/more relaxed’ more often.

I’m not the only one who finds this puzzling. Another paper linked below4, though by no means perfect, provides some additional critiques and even attempts to re-run the study.

Lastly, two studies have looked at measures of stress in cats at rescue shelters.

No evidence was found that Feliway had any effect on stress scores or upper respiratory diseases in shelter-housed cats2. No difference in the stress hormone cortisol was observed before and after exposure to Feliway10.

So out of all of this, we have one study that showed possibly positive behavioural changes in sedated cats in a vet hospital. That’s it. Hardly a solid evidence base for treating such an important welfare issue.

The crux of the matter is this: there is insufficient evidence for the use of Feliway in treating distress in cats. Obviously this is just my opinion and you’re welcome to differ, but all I ask is that if you use it, don’t rely on it. Keep an open mind, and talk to your vet about other ways of treating feline anxiety.

3 Replies to “A Critical Review Of Feliway For Cats”