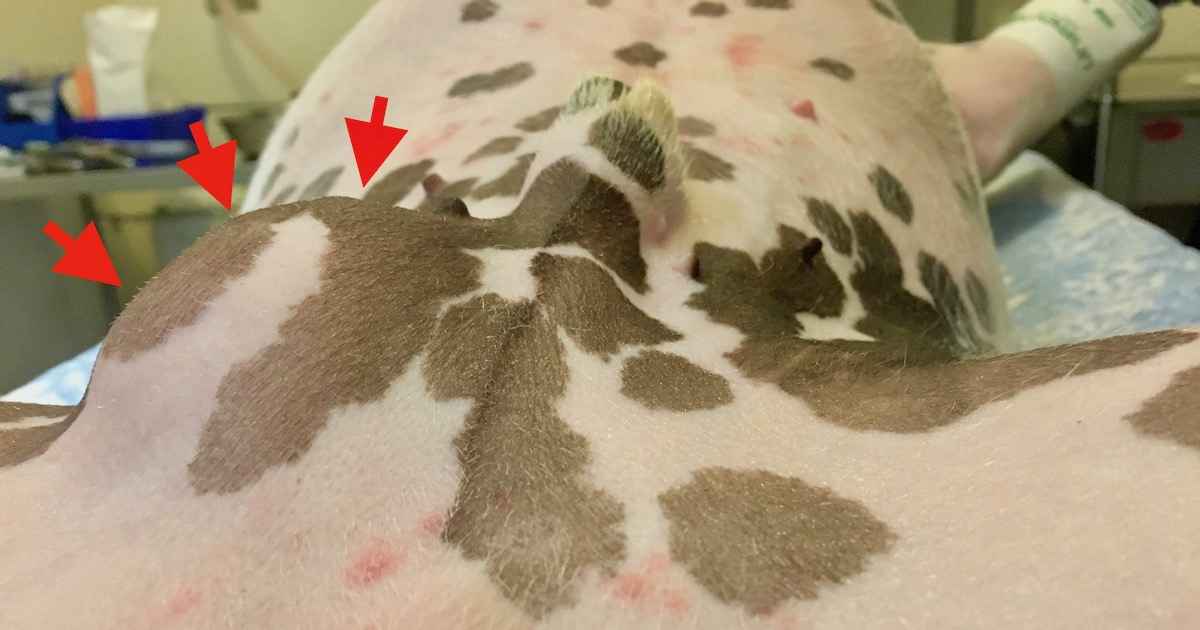 When a dog has a retained testicle, we call him cryptorchid, literally meaning ‘hidden testicle’. It’s common, not especially worrying, but also not harmless; I have seen one dog die and two come terrifyingly close.

With the right knowledge, this won’t happen. So here’s everything you need to know to keep your puppy safe.

As embryos, males and females start out with their ovaries or testicles in pretty much the same place. Then the testicle embarks on a long and perilous migration out of the abdomen and into the scrotum. Cryptorchidism is when it fails to reach its destination.

It can happen on just one or both sides (unilateral or bilateral), in about equal numbers. Interestingly, if only one is retained, it’s more than twice as likely to be on the right.

To diagnose a dog as cryptorchid, you have to know how long a testicle normally takes to arrive. In nearly all puppies, this is by 6 to 8 weeks of age. Therefore, most puppies that have an undescended testicle at their first vet check will end up being cryptorchid.

When To Neuter / Desex

Until the exit hole called the inguinal ring closes at around 6 months of age, there’s always a chance of the testicle descending.

Therefore, the best time to desex is at or after 6 month of age. The actual recommended desexing time for a dog will depend on their estimated adult size.

Which Breeds Can Be Cryptorchid?

As a general rule, an undescended testicle is more common in purebred dogs, especially in the following breeds:

And possibly also these ones:

However, an undescended testicle can happen to any dog. For example, my own Border Terrier was bilaterally cryptorchid, which caused the breeder considerable embarrassment.

That’s because he knew that cryptorchidism has a strong genetic basis. Therefore, even though a dog with one descended testicle is fertile, they should not be bred. Nor should any attempt be made to artificially replace a retained testicle (called orchiopexy) just so a dog can be bred or shown.

While we’re on all the unethical things people do, I’ve even been asked to insert a prosthetic testicle, just to fool the judges at dog shows!

Treatment Of An Undescended Testicle

Retained testicles are a minor problem and easily fixed.

There is no medical treatment likely to treat or prevent a retained testicle. Those who claim success probably have dogs whose testicle was always going to come down, just late.

The only effective treatment is desexing or neutering, or at very least the surgical removal of the undescended testicle. This is essential due to the extremely high rate of seminomas and sertoli cell tumours in cryptorchid dogs. There’s something about the higher temperature of retained testicles that makes cancer much more likely.

These are the dogs I have seen either die or come close. In two cases, they were dogs from disreputable rescue centres who did not ensure that the dog was fully desexed before rehoming. Therefore, these dogs were thought to be neutered until the symptoms of cancer appeared.

One such dog is shown above, with a swelling that appeared in the groin at around two years of age. He was lucky- although his surgery was disfiguring, he is alive today.

Dogs with an internal abdominal testicle may show hormonal changes as the only sign. Testicular tumours have a tendency to produce female hormones. For example, the dog I saw die was brought to me for enlarged nipples and being harassed by male dogs.

The surgical technique depends on where the testicle is found. There are three common locations:

The first thing we do after anaesthetising your dog is lie them on their back and try to pinpoint the testicle. Usually, this is easy. With a dog perfectly upside down, the way the scrotal testicle lies usually gives a clear idea of which one is missing.

Then we search under the skin from the scrotum to the inguinal ring. Although undescended testicles are smaller, they can usually be felt as a 1 or 2cm blip that pops under the fingers. The only time this is hard is when the dog is overweight. The picture (above) shows the result of just such a surgery, with one incision for the descended testicle, and another for the one under the skin in the groin.

If we find nothing, we assume the testicle is in the abdomen. Then, my preferred technique is a paramedian incision as shown here, which normally drops me right on top of it. The only time this won’t work is when the testicle is neither in nor out, but wedged in the inguinal ring itself. However, I’m usually close enough to be able to wiggle it out.

Some dogs (notably German Shepherds) have both undescended testicles in the abdomen. For dogs like these, my technique will create an incision like this on each side. Your vet will have developed their own successful approach, so don’t worry if it looks different.

The Cost Of Cryptorchid Surgery

Cryptorchid surgery is quick, easy, and not much more painful than regular desexing. With good pain control, recovery is rapid. Therefore, the only drawback is cost.

In our clinic, inguinal testicles like in the first picture generally add $100 to the desexing price. Abdominal testicle removal might add $200. Keep in mind that it’s hard to give a fixed price for unpredictable surgery like this and difficult retrievals will cost more.

Personally, although I’ve never seen it done, I feel it would be quite reasonable to ask the breeder for a contribution. After all, affected puppies have already been identified before sale, and the fault is mostly genetic in origin. However, with the shortage of puppies around, you might have a hard time convincing them.

However, that’s just a financial concern. The main message is that whether your puppy is cryptorchid or not, it’s no big deal as long as you act on it.

48 Replies to “Undescended Testicles In Dogs”