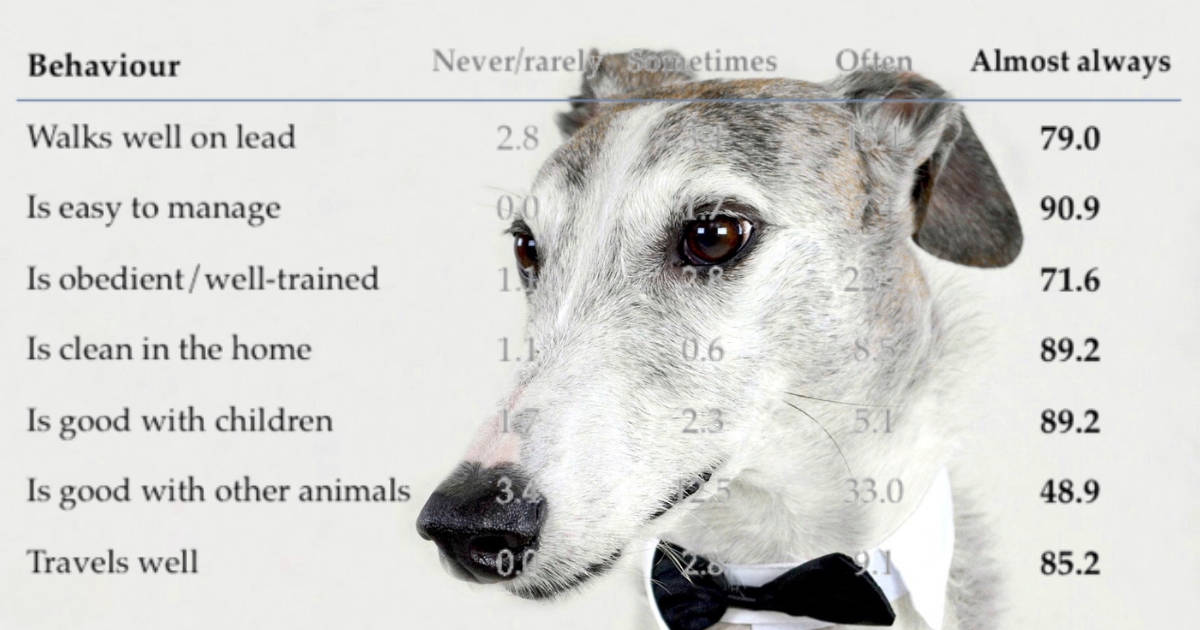 Have a look at the figures above. Any legitimate dog rescue charity would dream of numbers like these.

These are what greyhound adopters reported in a recent study, and I’m not surprised. I see tremendous levels of satisfaction among greyhound owners. They are a genuine alternative for new dog owners.

Like all dog breeds, there are good points and also things you need to know. This is your evidence-based guide to what to expect from an adopted Greyhound. Let’s start with the good things.

Plus you get a warm, fuzzy feeling from knowing you saved one. I don’t want to depress you with the numbers but they aren’t good.

All breeds have pros and cons, and Greyhounds are no different. However, before I list potential issues, let me say this: choose your Greyhound rescue organisation carefully and you’ll benefit later. Look for a standardised behavioural assessment of:

With so many needing adoptions, it’s better for everyone to apply strict selection criteria at the start. And it shows in the figures. The reported failure rates of 3.2% after 1 month and  7% after 6 months are as low as it gets.

The rules on greyhound muzzling vary from state to state. Muzzles are not required to be worn in Victoria, whereas in NSW a retraining program is required first. In South Australia, there are three ways to get a muzzle exemption:

In each case, once a dog has passed their assessment, the owner/adopter sends the signed paperwork away to receive a license card that they then carry at all times when out without a muzzle.

Other Greyhounds must be muzzled when not on your property. It’s not as bad as it sounds- their lightweight wire muzzles aren’t a major problem either in looks or use. Greyhounds must also be on a leash at all times when in public. Recently South Australia has been trialing greyhound days at certain off leash dog parks but you need to book these quickly as demand is high.

Medically, Greyhounds are a healthy breed and you can expect few problems. Three notable exceptions are:

This table shows the more common behaviour problems reported in two major studies. If the figures seem exaggerated, it’s worth noting that I combined ‘sometimes’, ‘often’ and ‘always’ to get these numbers. I’ll explain them afterwards.

So we have two main issues:

The Australia-New Zealand study was done only one month after adoption, which I think explains the much higher rate of destruction and separation anxiety.  This fact also gives hope that these behaviours will settle down.

You can read more about anxiety post-adoption here.

To me, the bigger potential issue is predation and aggression towards cats, small dogs, and unfamiliar animals. While common in theory, in practical terms it’s almost never a problem. Greyhounds should have been pre-assessed before adoption, and especially if they are screened for a muzzle exemption.

If you own a cat, care is still advisable, especially at the beginning. Even if you are not required to use a muzzle in public it is sensible to use one at home until you know things are OK.

The various anxiety-related behaviours probably come from the deprived environments these dogs lived in before adoption. They seem to improve with time, except for one.

You may just have to get used to having a quiet and gentle shadow around the house. It’s a small price to pay for rescuing such a beautiful animal from oblivion.

3 Replies to “The Pros & Cons Of Greyhound Adoption”