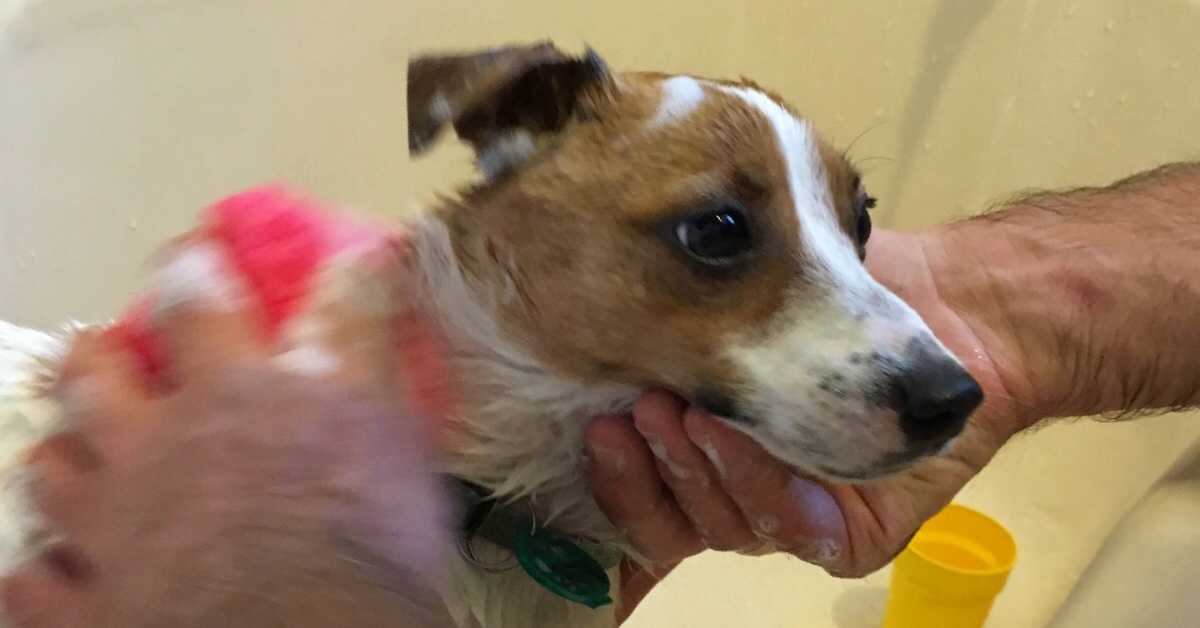 When I was a young vet, I used to say what everyone says: that you can’t bath dogs very often.

How wrong I was. If I wasn’t lucky enough to work with the right people (and have the right dogs) I might never have woken up. You need to hear this too: every day I see dogs that could be much better if only their owners knew the truth.

The best way to explain is to use real examples.

Jack is an enormous cuddly giant of a breed called a Cane Corso, and one of the nicest dogs I know. Except when I first met him for a second opinion you wouldn’t have known.

Suffering from what seemed to be an endless cycle of ear infections had made him highly anxious about his ears. Each time, the pain was making him more and more difficult to treat. Recently, only sedation and ear flushes were possible, and these never work as well as ointment.

I looked at his vet history, and couldn’t fault it. Ear infections are really just skin problems and his vets knew this: he was getting the right food for his skin, good flea prevention and even some skin medications. But you can guess what was missing: like Jack, it was the elephant in the room.

I know the other vets normally use shampoos too. I’m sure the only difference between me and them was the strength of my personal convictions about bathing. Asking owners of an 80kg dog to bathe him weekly isn’t something you do unless you’re dead certain it will help.

I ordered them in an industrial-sized Dermcare Natural, and to their credit, they did it. That’s four years ago. Jack has only had one ear infection since.

When I saw Tiffy for the first time this year, it was hard to watch. Throughout the consultation she itched almost constantly, and you just wanted it to stop.

Like, Jack, other things had been tried without success, but not shampoo. The breeder had specifically warned Tiffy’s owner of the evils of bathing, and so it hadn’t been done. That is, until she came in contact with me.

As I also said with Jack, I can’t promise this will work but it’s the glaring omission and harmless to try. It takes a lot to reject a breeder’s advice, but I’m pleased to say that’s what happened. I saw Tiffy the other day and she’s now a different dog: relaxed and comfortable (you can read a comment from her owner below). Yes, it can sometimes be that easy.

We all have our weaknesses, and mine is liking Terriers. As luck would have it, all three of mine have had the common skin allergy of dogs called atopic dermatitis.

For the past 20 years, my house has been itchy-dog boot camp. It’s on these dogs that I first noticed how just well bathing can work on the itch level. Ruby in fact never needed anything else; every time she got itchy I just bathed it away, sometimes up to twice a week.

Tinker, like Jack, needs baths to stop him getting ear infections, but he had a few before I worked this out. His ears do a neat trick of swelling up so the canal closes, but if you’re quick, a bath makes the swelling go down in hours.

Loki is my most severe case, and a good example of when bathing doesn’t work. When he was younger, I could manage him just with baths. Have a look at the picture. That was Loki’s paws just before a bath and four hours afterwards.

Atopic dermatitis tends to worsen up to 4 years of age, and in his case baths weren’t enough any more. About two years ago he went on Apoquel and last spring when even that wasn’t working I switched to Cytopoint. Funnily enough, these treatments are so effective that I don’t have to bath him much any more.

I’ll finish by answering four common questions I get about bathing dogs.

How Many Times Should You Give A Dog A Bath?

How often you bath a dog should be based on need. Some dogs never seem to need bathing, whereas others get itchy or smelly quickly. An average dog is best bathed once every two weeks.

Is It Bad To Bath Your Dog Every Week?

Frequent bathing can be harmful to some dogs, especially those with more wolf-like coats. However, using a good shampoo should allow you to bathe as often as you like. If you bath correctly, it should result in a softer, shinier and less itchy skin and coat.

What Happens If You Bath Too Much?

Cheaper detergent shampoos tend to strip out the skin’s protective oils. If these are used too often, the skin becomes dry and flaky. Signs of bathing too much are the presence of dandruff and scale and a dog that gets itchy after bathing.

What Are Good Dog Shampoos?

The best dog shampoos for frequent use are described as soap-free, and cost a little more than the rest. Products for puppies, fleas or human babies are probably of little benefit. Good Australian brands include Dermcare, Virbac and Blackmore’s.

Five years ago, when I wrote a longer article about how to bath dogs, I thought I was putting an old myth to bed for good. Yet here we are, still fighting the same fight. So if you hear someone telling you not to bath a dog too much, get them to read this!

3 Replies to “How Often Can You Bath A Dog?”