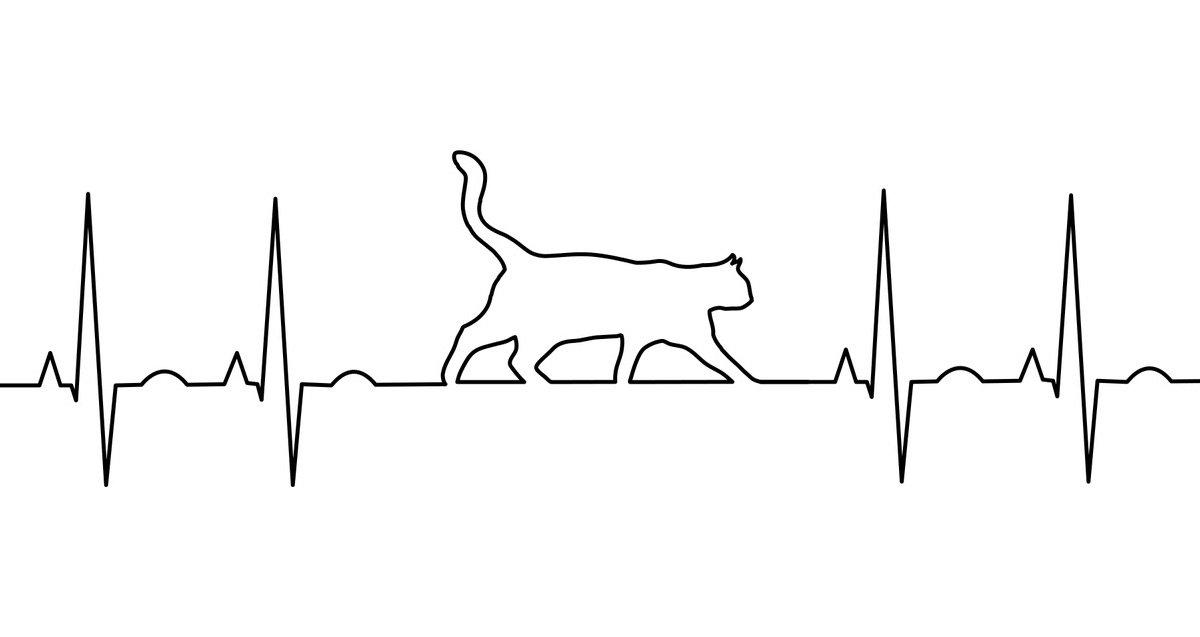 Just like with so many other illnesses, dogs and cats don’t advertise the fact that their hearts aren’t working properly. If a heart murmur is found at a regular checkup you are lucky; otherwise, you may not know until there are signs of problems.

The Signs Of Heart Problems In Dogs

How do you know when your dog has a failing heart? Symptoms may include:

Importantly, not all dogs will show even the most common clues. Cardiac collapse is especially hard to tell apart from seizures. Clues include:

The Signs Of Heart Problems In Cats

It’s much trickier to tell when a cat has heart issues. Loss of fitness is almost impossible to detect in a cat. Cats also have smaller lung volumes and so are much more sensitive to pulmonary oedema and pleural effusion. They can go from seeming normal to a full blown emergency in the time it takes to get to the vet.

There are still some clues though:

Another important feature of feline heart disease is the risk of a blood clot. These form in the diseased heart but can become dislodged and block a major artery. That’s why many cats with heart disease are treated with a blood thinner.

However, for most dogs and cats change usually occurs slowly. Dogs and cats almost never suffer from heart attacks.

For both dogs and cats the key is to get regular checkups; read about a cat’s lucky heart checkup here. Most heart problems can be easily heard by an experienced vet months to years before any drama.

Sometimes a puppy or kitten’s valve doesn’t form properly (mitral or tricuspid valve dysplasia), other times it gets misshapen with age (acquired mitral insufficiency). Either way, some blood flows backwards into the atrium instead of forwards into the arteries when the heart ventricle contracts.

Sometimes a puppy can be born with a narrowing near a valve (aortic or pulmonic stenosis) which causes a partial obstruction to blood flow.

A shunt is when blood abnormally flows in the wrong direction. Patent ductus arteriosus occurs when a shunt present in the womb fails to close at birth, and is surgically curable if found early. Ventricular or atrial septal defects (the ‘hole in the heart’) cause blood to shunt from left to right through the heart. Tetralogy of Fallot is a highly complex and thankfully rare combination of shunting defects.

Large breed dogs and Maine Coon or Ragdoll cats can develop a problem where the heart muscle gets thinner and the heart itself enlarges like a balloon (dilated cardiomyopathy) like in Kira’s story.

Most heart problems in cats are caused by an enlargement and thickening of the heart muscle (hypertrophic cardiomyopathy). This prevents the heart filling and emptying properly.

Arrhythmias are less common as a cause of heart disease; here’s the only dog we’ve seen that needed a pacemaker. Rhythm problems are very common as a complication to a heart already in failure due to other causes.

There’s no end of rare causes as well. We recently saw a dog with cardiac tamponade secondary to a pericardial effusion but that’s one of only two in the past ten years.

What Happens In Heart Failure?

Regardless of the cause, the end result is much the same: there is a drop in cardiac output and arterial blood pressure. This means the body is poorly supplied with nutrients and especially oxygen.

There’s often also an abnormal buildup of pressure in the veins leading to the heart. Veins leak under high pressure and so fluid starts escaping into the tissues and spaces. Fluid can be in the lungs (that’s the fluffy clouds shown by the thick arrow above), around the lungs (pleural effusion), in the abdomen (ascites) or under the skin (oedema).

As a response, the heart compensates by increasing its rate and stroke volume. With time, the whole heart becomes enlarged. The heart pictured above is so big it’s pushing the windpipe (the dark line) upwards.

Treating heart problems has been one of the major advances of the past 20 years. We know more, and we have access to a lot better tools and medicines.

First, we need a diagnosis. That may require a combination of examination and auscultation, special blood tests, X-rays, ultrasound and ECG.

Pictured is a standard x-ray we use to look for cardiac enlargement. Thanks to the EPIC study, we now know that dogs who develop enlarged hearts are likely to have much longer lifespans if we start treatment even before signs of problems appear.

For each patient, it’s a case of carefully balancing the effects of each drug, monitoring the results carefully and being prepared for change.

Responses vary a lot. Some dogs & cats seem to get back to their normal lives, others don’t respond adequately at all. However, for most animals (we’ve also treated rabbits and ferrets with heart failure) we can offer them a return to a good quality of life.

We expect to be able to get your dog wanting to go for a walk again, and cats to seem perfectly normal around the house. From then on, some pets stay well for many years, whereas others slowly worsen, requiring dose adjustments to keep them happy.

If we can’t keep your beloved pet happy, you have our guarantee that we’re not going to push further treatment.