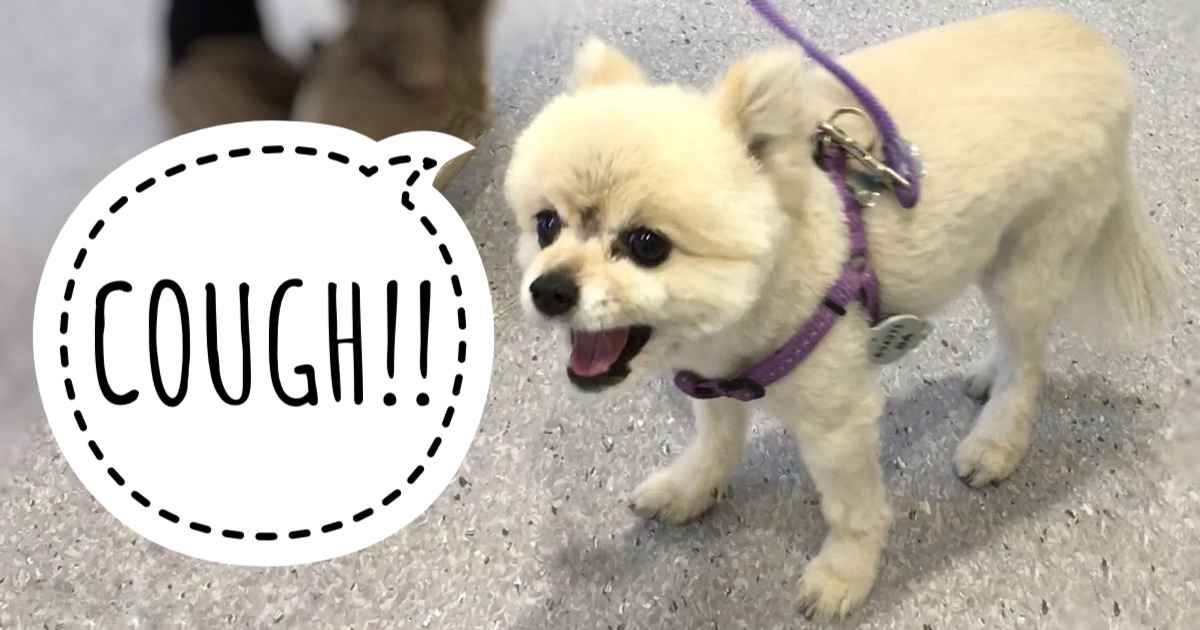 (Quick guide) When your dog has a cough:

Coughs in dogs are common enough that almost all of our dogs will have one at some time in their life. Some will be serious, others less so.

It’s also quite possible you will get the wrong advice. Our understanding of the causes of coughing has changed, especially for older dogs. It’s certainly not as simple as knowing whether it’s a wet or a dry cough.

However, before we get to the causes, there’s one question we always need to ask ourselves…

Is It Even A Cough?

This might seem a strange thing to say, but trust me, it’s not. Most dogs that cough are also gagging and retching, making for a very confusing picture. Here are just three signs often mistaken for coughs:

Odds-on your dog will miraculously stop coughing when they reach the vet. Therefore, the best way to put a smile on your vet’s face is to take a video with your smartphone. It won’t necessarily tell us what type of cough it is, but it should at least tell us which body system to investigate first.

So let’s say you’re confident what you see is a cough. Let’s look at why it might be happening.

Causes Of Coughing In Young Dogs

A simple way to get a rough idea of what might be wrong is the age of the dog. While (of course!) anyone can get anything, generally young and old dogs get different diseases. Add to that a good physical exam, possibly an X-ray and we’re usually in a good position to tell you what’s wrong.

Causes of coughing in a young dog are mostly infections.

Kennel cough or infectious laryngotracheitis is extremely common in social dogs (you can read a whole article on it here). Key points are:

Treatment of kennel cough is mostly via anti-inflammatories. By reducing the discomfort, the cough reflex gets a lot better and the poor doggies can sleep. We also use antibiotics and cough suppressants in selected cases.

Just like people, dogs can inhale solid objects into their airways. While anything can do it, we mostly see one of two scenarios:

Aspiration pneumonia has a characteristic appearance on X-rays. Grass seeds are a lot harder to see and require us to be suspicious to go further. Therefore, it’s a good idea to let your vet know if there are a lot around at home.

Up to the late-1990s, heartworm was our most common cause of unexplained coughing. These dogs got very sick, and many died. With the advent of good heartworm prevention, this has become just a memory, but it’s still common in areas with poor levels of control. You can read more about our experiences with heartworm in Adelaide here.

Infection of the lungs is a lot less common in dogs than people. That’s probably because dogs don’t get the human cold or flu, but also because gravity is on their side. It’s a lot easier to cough things up if your lungs are horizontal!

However, we do see occasional unexplained pneumonia. As long as we treat them promptly, these dogs should make a full recovery.

Most of the reasons for an old dog coughing are the effect of ageing on the body. We’ll start with two common conditions that affect the cartilage.

If you feel your windpipe it will no doubt be hard and inflexible. That’s just how it should be. Yet for unexplained reasons, the cartilage in many old dogs gets soft. Then, during the breathing cycle, the weakened cartilage is unable to maintain its normal shape.

If this happens in the windpipe, it often results in tracheal collapse. The usually round trachea becomes oval and can even collapse completely so that the sides touch.

You can imagine how distressing and uncomfortable this is for the dog. Attempts to breathe only increase pressures and make the collapse worsen. Airway irritation stimulates a harsh cough that in turn adds further irritation.

Excitement and neck pressure tend to make tracheal collapse worse. I really feel for these dogs.

Bronchomalacia is the same process when it occurs in the smaller airways of the chest. The distinction is important as this cough is often confused with heart failure.

Treatment for either problem is never easy. Surgery is rarely a realistic option, so we have to rely on juggling a combination of the following:

It’s almost never possible to stop the cough completely, but we can usually at least reduce distress and give comfort.

A heart problem can cause a cough in two ways.

These days, most heart specialists think that ‘cardiac coughs’ are being over diagnosed. It’s vital that we don’t assume that just because a coughing dog has a heart murmur that the two are related.

A dog with a heart problem, not just a murmur, will usually also have poor fitness and rapid breathing. At a bare minimum, we should at least do an X-ray to be more certain. Treatment is then via:

Bronchitis is another disease that can affect the same animals. In fact, it’s not unusual for all three to have a role in an old dog’s cough.

Bronchitis responds best to either antibiotics, prednisolone or both. Despite the changes you might see on an X-ray, it often comes down to a ‘treatment trial’ to see what works.

Are you starting to get the idea that old coughing dogs are challenging?

I’ve already mentioned laryngeal paralysis in the context of aspiration pneumonia but it’s really a disease of older dogs. These are usually larger breeds of dogs with characteristic raspy breathing that gets worse with exercise and warm temperatures. The treatment is surgical.

The last few I have almost never seen but are included for the sake of completeness.

What To Give A Dog For A Cough

The use of cough suppressants without a diagnosis is never a good idea. In our desire to get rid of a cough it’s easy to forget that most coughs are doing something useful: clearing the lungs of material that shouldn’t be there.

Successful treatment is entirely about understanding the cause. The final thing to say about coughs is that it’s not really possible to tell them apart at home. Hopefully, I’ve given you an idea of what might be wrong, but you always need a vet to get a proper diagnosis. And it really matters to get it right, as I hope you can see.

One Reply to “Help! My Dog Is Coughing & Gagging”