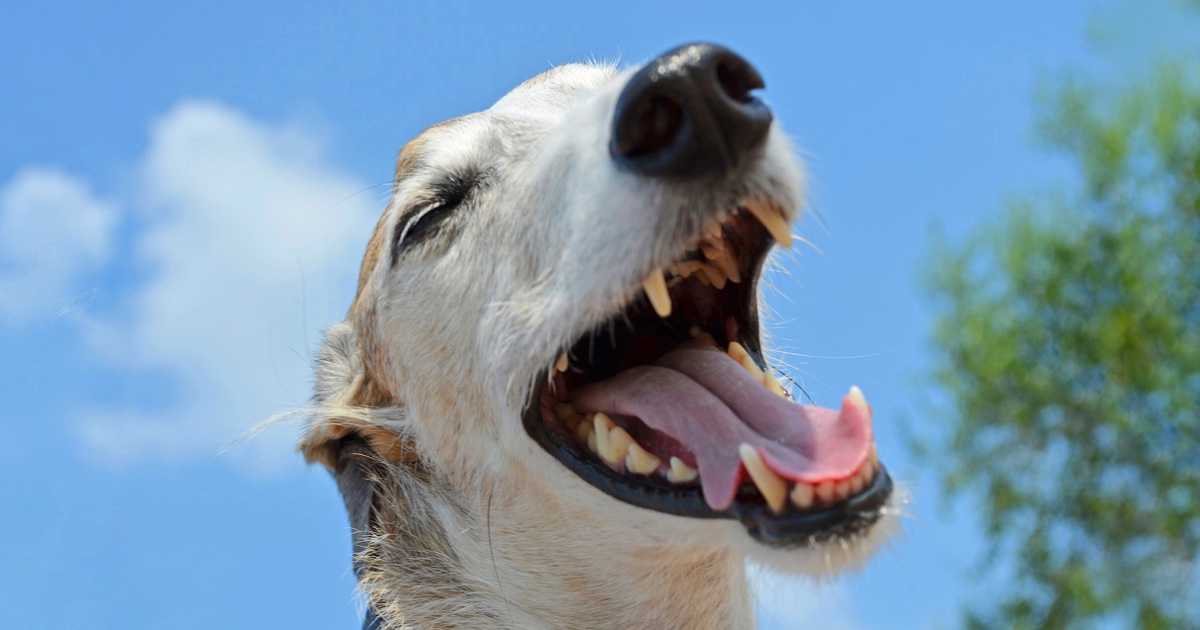 Does your dog do this? When mine gets excited or playful he starts sneezing.

Sneezing during play isn’t well understood, but it’s clearly one of the least serious causes of sneezing in dogs.

I’ll take you through the other common reasons, from minor to major. As nearly every one is associated with a runny nose, I’ll also describe the nasal discharge that goes with it.

By the time you make it to the end, you’ll be an expert!

Do Dogs Get Colds?

One cause you won’t find here is the common cold.  Despite what you hear, dogs just don’t get them.

Symptoms like sneezing, congestion, watery eyes or a runny nose are instead likely to be caused by one of the other problems on this list. You can find the causes of coughing in dogs on this page.

Causes Of Sneezing In Dogs

Dog sneezing looks just like human sneezing. The only thing you might confuse with it is reverse sneezing. This is the inward sucking of air accompanied by an alarming grunting noise. Reverse sneezing has different causes and treatment.

So before we start, if this could be your dog, you’ll find some videos at the link. Now to those causes…

The number one cause of sneezing is the only normal one, and the reason why it exists in the first place. When something irritates the nasal lining, it triggers a sneeze. The aim is to expel material from inside the nose.

Examples of irritants are:

You’ll often notice your dog sneezing after an injection at the vet. In this case, the cause is the alcohol swab and their sensitive nose.

Any discharge should be clear and bilateral.

You’ll often get a face full of nasal spray when you say hi to breeds like Boxers, French Bulldogs or Pugs. Many short-faced breeds sneeze frequently without it being very important. It’s rarely a concern as long as you don’t hear breathing noises and the discharge is clear.

Those who snuffle or grunt with each breath may benefit from corrective surgery to open the airways. In the case of sneezing, that would be surgery for stenotic nares.

While allergy is a common cause of itchy skin, it’s a rare cause of sneezing or a runny nose. When it does happen, it’s usually at the minor end of the spectrum.

Again, the discharge is clear and bilateral. However, most dogs suspected of having allergic rhinitis actually have the next problem…

Symptoms just about always improve with treatment. You can read how dogs catch kennel cough here but it’s basically anywhere dogs get together.

A dog who sniffs up a grass seed will suddenly start violently sneezing and sometimes even pawing at their nose. One distinctive feature is that the sneezing can be so hard that the nose hits the ground.

The discharge is unilateral, quickly becoming yellow or blood-tinged. Grass seeds can’t go out backwards and need to be removed by your vet. Sneezing tends to reduce with time if the seed isn’t removed.

An easy trap to fall into is thinking it’s fixed when it’s really just the dog getting used to it.

Other foreign bodies only occasionally get up dogs’ noses. I have seen one unlucky dog who had vomited or coughed a dog biscuit into his nasal passages. I also suspect that just like in cats, occasionally nasal disease from another cause can cause dead nasal turbinate bone to act as a foreign body.

When the front teeth in the mouth get bad, the infection can push through the thin bone separating them from the nose. We call this an oronasal fistula.

Oronasal fistulas are a lot more common than realised because the tooth can look fine until it’s probed. This is just one of the reasons why anaesthetic free dentistry is only a cosmetic procedure.

If there’s any discharge, it’s yellow and unilateral.

Idiopathic rhinitis is possibly the most frustrating condition on this list. It won’t kill anyone, but it’s very annoying, and like the name suggests, poorly understood. Another name for it is chronic hyperplastic rhinitis.

Affected dogs produce a thick, yellow, ropey bilateral discharge that gets sneezed on walls and furniture. There’s also a lot of snorting and snuffling and sometimes even a vomit afterwards. Diagnosis (found in the link at the end) is made by ruling out other conditions.

The best we can do is to keep these dogs on continuous medication. Options include antibiotics, anti-inflammatories or prednisolone based on the response. Recently suspicion of a link with gastrointestinal disease has led to antacids or special diets being trialled as well. It would be nice to know more.

Thankfully, fungal infections are rare, because they’re nasty and difficult to treat. Like tumours, they progress slowly and can cause facial deformities.

Symptoms include long-term sneezing with a yellow discharge that may contain blood.

Everyone’s fear is that the sneezing and nasal discharge are caused by a tumour. That fear is well-founded, as around 80% of nasal masses are malignant.

Thankfully, tumours in the nose are one of the least likely reasons for sneezing. When they do occur, the discharge will usually be unilateral and blood-tinged.

To finish this excessively long list, I’ll throw in some rare causes of sneezing you’re never likely to see.

So at this point you must be thinking it’s all hopeless. Thankfully that’s not true. Most of the causes of sneezing are the better ones, and most improve with treatment.

I’ll finish with two top tips your vet will thank you for doing before you come:

Related: Causes Of Bleeding From The Nose In Dogs (includes a list of the tests your vet might recommend for nasal disease)

6 Replies to “Causes Of Sneezing In Dogs”