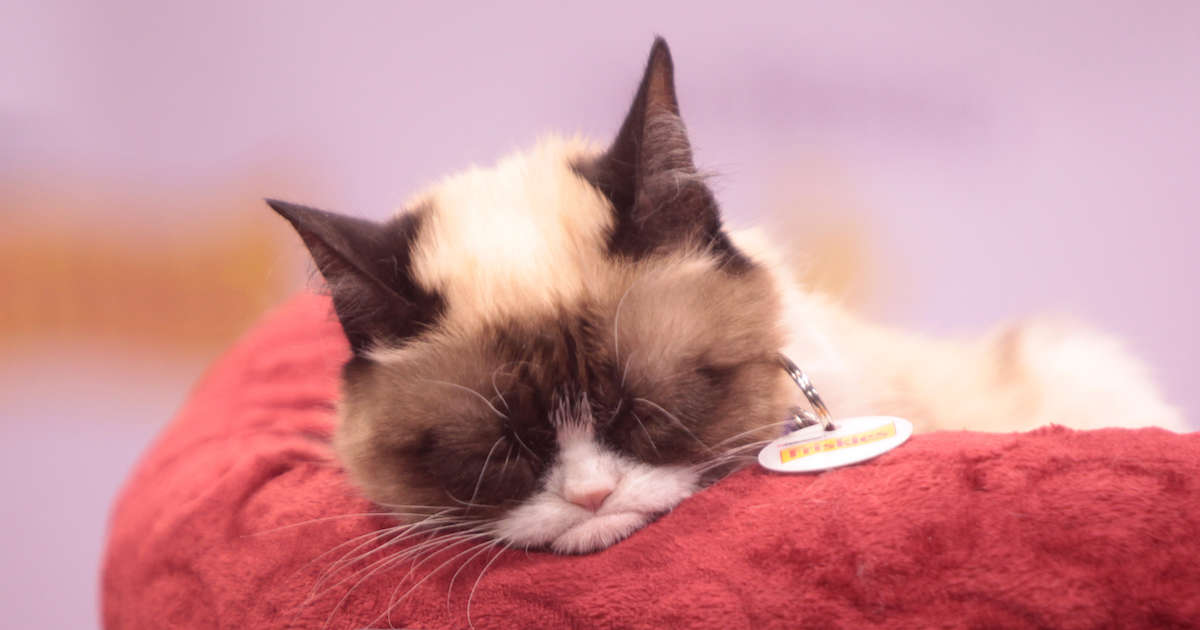 It’s easy to forget how refreshing Grumpy Cat was when she first appeared. If something wasn’t as good as the hype, then there she was with perfect one liner to burst the bubble. Coming from a cat like her, who could argue?

Grumpy Cat will always be the queen of memes, and perhaps the most famous cat of our time. Until now, I’ve refrained from talking about her death. But hopefully enough time has passed, because there’s a story in it about the future of cats.

How She Passed Away

It starts with how she died. In the statement posted by her owner at the time, two unusual things stood out:

Why are these things so strange to a vet?

Cats have an average lifespan of 14 years, so dying at seven is extremely unusual. It’s even more unusual for a cat under veterinary care to die of a kidney infection.

What does this all mean? It’s safe to say that given her worth, she must have received better veterinary care than almost any other cat on the planet. Yet somehow her death looks like she wasn’t cared for at all.

I have a theory based on my experience that has more to do with her special issues than the care she received. To me, Grumpy Cat’s unusual death is best explained by her genetic disease.

What Made Her Special

Grumpy Cat was famous because the shape of her face gave the impression of a permanent frown. She was also much smaller than other cats. Both of these are due to her being affected by feline dwarfism. As was a brother from the same litter.

Her condition was probably the result of a single mutation in the DNA that governed cartilage and bone growth. Dwarfism in cats is incredibly rare, but when you look at it in other species you can see the harm it causes. The mutation is often associated with more widespread defects around the body, and a shortened lifespan.

The Origins Of Breeds

We can be grateful to Grumpy Cat’s owners that they never took the opportunity to turn her defect into a new breed. Because that’s my point: nearly all new cat breeds come from mutations just like hers.

Traditional cat breeds, like say the Burmese, come from cats in one area evolving different characteristics over a long time, maybe thousands of years. What makes them who they are is the net result of countless small genetic variations.

New breeds are either crosses of other breeds, or more commonly, the deliberate selection of a new trait. Which often starts as a mutation in a litter just like Grumpy Cat’s.

Here’s a list of such breeds. With the exception of the Munchkin, all of these were exhibited right here at the Royal Adelaide Show last month.

All of these breeds are formed by a single genetic mutation. In fact, I’m in the privileged position of owning one of them, the Devon Rex. So what I say next will have the ring of hypocrisy about it.

Not all these breeds should exist.

The Effect Of Mutated Genes

The mutations we choose for cosmetic reasons almost always have greater unintended consequences.

The American Curl has ears that curl back and inwards, but appears otherwise healthy. That’s in contrast to the Scottish Fold, which suffers painful skeletal abnormalities that I talk about here. Just for the sake of cuteness.

However, even that is small cheese compared with the last group.

Lethal genes are those that are incompatible with life. If a kitten carries two copies, they die before birth. Therefore, these breeds are known to have smaller litter sizes. But that’s not all. Even one copy isn’t safe.

The Manx and the Cymric have a tail-less gene, but what this really means is a ‘spinal deformity’ gene. It doesn’t always confine itself to just the last part.

I have seen Manx kittens unable to urinate and defaecate due to the same spinal defect. There’s no alternative except to euthanase a young kitten who might have only been with the family a month. These are events you never forget.

Munchkins have a lethal form of dwarfism that makes oh-so-cute stubby legs. Their popularity with the public is in complete contrast with their pariah status in the veterinary profession. So far not enough work has been done to document what else might be going wrong.

The Manx would never be considered ethical today, but exists solely by virtue of its history. Munchkins, I am pleased to say, are still a rare breed in Australia, but we must fight to keep it that way.

We must also fight our natural attraction to novelty. Cats like Grumpy Cat remind us not only that mutations appear all the time, but that they can have very cute results. She was adorable, but she wasn’t all she seemed.

One cat dying like this is very sad. A whole breed is a tragedy.

3 Replies to “The Death Of Grumpy Cat”