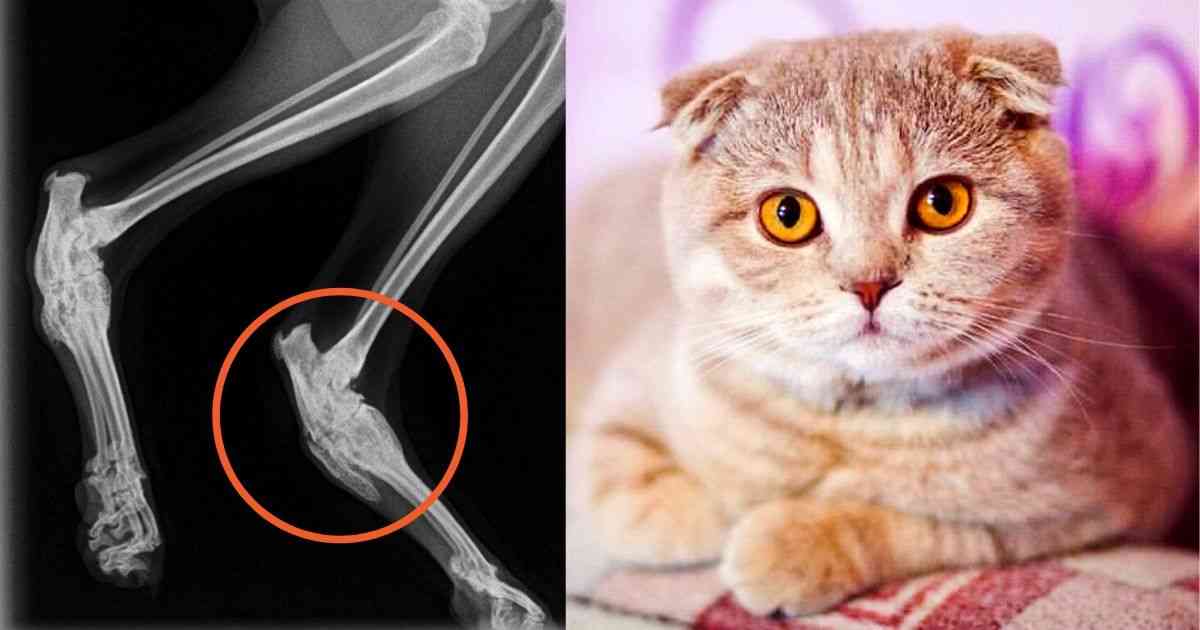 If you have a Scottish Fold and this is the first time you are hearing of their problems, you are not to blame. Finding good information before you get a cat is not easy, as you have probably learned by now.

Nearly any online guide only contains the positive information. A breeder only gives more of the same. As far as everyone is concerned, Scottish Folds are adorable and live long, healthy lives. That’s why so many good, kind people get them.

My golly they are adorable, but that’s far from the whole story. Ask any vet who’s seen a lot of the breed, and especially any feline specialist. They’ll tell you that most Scottish Folds live in chronic pain, all because their looks have been given priority over their health.

The fact that there’s a debate at all speaks volumes about how bad we are at seeing pain in animals. There’s no doubt that just like I was once, many breeders don’t know what chronic pain looks like. Not the “ow, you stepped on my toe” of acute pain, the slow ache of joints that hurt to move.

The pain we’re talking about manifests as cats that just stay put. They don’t move as much or as far. They don’t even complain in any way you can tell.

Why Scottish Folds Have Health Problems

Folds develop joint pain and stiffness due to a genetic disease called osteochondrodysplasia. It causes the visible folding of ear cartilage, but also invisible abnormalities of cartilage and bone throughout the body. This is especially severe in the elbow and hock joints.

The picture at the start shows the typical appearance of the hocks (i.e. ankles) of a middle-aged cat. You can see severe arthritis, and thickened bone around the hock joint. The elbows look very similar.

Problems start early if recognised by astute owners. Just the other day I saw a Fold barely over one year old who had already become quiet and less active. Some may consider that normal for the breed but of course it shouldn’t be.

Just look at all the pictures of Folds in abnormal postures like here. We need to stop seeing this as cute and see it for what it really is.

These problems lead to others. Folds are truly lovely cats, but as a vet I’ll tell you they rarely tolerate blood sampling, probably because it hurts to hold their legs. They are also known as high shedders, which I suspect is due to their grooming being uncomfortable or difficult.

Can Scottish Folds Be Bred Ethically?

Cat breeders often say that all we need to do is breed a fold to a non-fold cat, so that the offspring have only one abnormal gene. This is false. As long as a cat has a folded ear, by definition the defect is active.

The genetic mutation is autosomal dominant, and so carriers of one gene are still affected. The only benefit of such a pairing is that some kittens will not carry the mutated gene at all. These have normal ears and are often called Scottish Shorthair.

Due to the abnormality being much more than just visual, the Scottish Fold is banned by the British Governing Council of the Cat Fancy and the Fédération Internationale Féline. I never saw it in the UK, but it has taken off in Asia, the USA and Australia where no such restrictions occur. This is despite the clear stance of the RSPCA:

RSPCA Australia believes it is unethical to breed from animals with a genetic mutation that is known to cause painful deformities and disease.

Source: What are the health problems with Scottish Fold cats?

Quality of life for most Scottish Folds improves dramatically with treatment. Therefore, do not despair or feel guilty. Instead, seek your vet’s advice.

They may see your cat and say everything’s OK. However, if a discussion reveals your cat to be less active than expected, treatment is likely to bring benefit.

Most Folds I see do extremely well on a very simple and inexpensive anti-inflammatory called meloxicam. It’s easy to give and usually well-tolerated. Once we start, we like to keep an eye on the liver and kidneys, however the most common problem is a gastrointestinal upset.

I know that in the USA meloxicam is only licensed for short-term use, but vets in Australia and elsewhere can use it for far longer periods. I have kept many Scottish Folds on it trouble free from youth through to old age. Not because I wanted to, but because they were clearly happier when I did.

If this isn’t possible there are other treatments that can work, listed here. It’s worth persisting simply because the results can be so good. Controlling a cat’s weight is important too. The Fold pictured here is distressingly overweight and once again I have to ask: ‘is this posture cute or troubling?’

Yes, I’m frustrated at how the breed is promoted, but I won’t take it out on you. Together, we can make your Scottish Fold live a life that’s just as happy as any other cat’s.

Related: My Views On The Munchkin Breed & Grumpy Cat

(And just a little update: the young Fold I mentioned earlier came back 2 weeks later a whole new cat. He was happy, back to his old self again, and would even let us hold his leg to take a second blood sample without complaint!)

16 Replies to “What Cat Lovers Should Know About Scottish Folds”