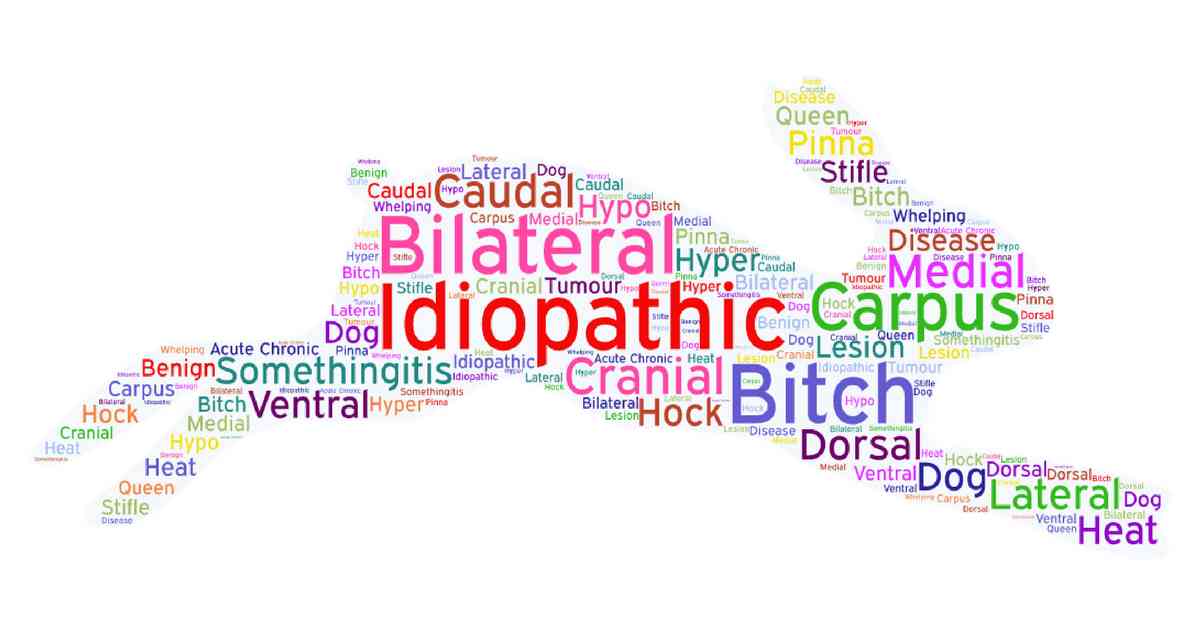 Are we talking gibberish? Here are the most common vet words that get us in trouble. Read this list and you’ll prevent a lot of misunderstanding at the vet.

Remember SARS: severe acute respiratory syndrome? It made a lot of people believe ‘acute’ means severe, when all it really means is ‘comes on quickly.’ When you stub your toe it’s an acute injury. See also chronic.

What a great example of why vets have special words; if I don’t use it, I have to use four whole words! It simply means ‘present on both sides’. For example, most pet insurance companies have a ‘bilateral conditions’ exclusion where if a pet has had a problem on one side before starting cover, they will exclude the other side as well. Arthritis is commonly bilateral; unilateral means affecting only one side.

I just can’t say ‘bitch’ to clients thanks to people ruining the word by making it a form of abuse. It just means an undesexed female dog. A lovely one. See also dog

I want this word back. While we’re at it, can we stop calling people ‘animals’ when they behave badly? That’s neither fair nor accurate. Animals wouldn’t do half the things people do.

Benign simply means “remaining localised and not invading adjacent tissue”. I avoid saying ‘benign’ because it makes a tumour sound cuddly and harmless when it isn’t. A benign tumour can still be fatal, depending on where it is growing, such as in the central nervous system. A benign mass on a lower leg will still be very hard to successfully remove if left too long.

Malignant is the opposite of benign, and is essentially a synonym for ‘cancerous’. Malignant tumours have aggressive behaviour and can invade and destroy adjacent tissues. They may also metastasise, when they spread to distant sites in the body (metastasis) often via the bloodstream or lymphatics.

The carpus is the same joint as our wrist but we don’t say ‘wrist’ because the joint is so different. Just like us, it’s on the front leg. See also hock & stifle.

Every time I say something is ‘chronic’ I worry people think I mean severe, and end up explaining it anyway. We call a problem chronic when it has been happening for two weeks or more (chronos = “time”). Just like its opposite acute, it’s got nothing to do with how bad it is. You can have a chronic itch!

Directions on the body

We use some different anatomical words than humans because animals stand on four legs, not two.

If you’re at the vet, chances are your pet has a disease. However, if I say so, it often causes people to think something is terribly wrong. ‘Disease’ doesn’t mean anything specific; it just means anything wrong whether mild or severe. In fact, give me five minutes and I can find a ‘disease’ on any animal, even though it may be trivial! See also lesion.

Yep, even ‘dog’ has two meanings. Is nothing sacred? If your breeder talks about their ‘dog’, chances are they specifically mean their breeding male.

This is the equivalent joint to the ankle in people, found on the back legs. Just like carpus & stifle, we change the name to recognise the big differences for four-legged animals.

You probably already know that these have nothing to do with hyperactivity. These are opposites and refer only to quantity. Hyper- means too much of something, whereas hypo- means not enough. A hypothyroid dog is lethargic, not bouncing off the walls.

You’ll see this word when Googling. This is the most technical word I’ve included but it’s so useful. It means: ‘of unknown cause’. There are lots of idiopathic diseases in veterinary medicine.

Bitches are said to be ‘on heat’ or ‘in season’ during the two or three week period when they show signs of fertility. They experience vulval swelling, mammary gland enlargement and a blood-tinged discharge. Their actual temperature doesn’t change though.

I was warned at vet school not to use this word but I just can’t help it. A ‘lesion’ is any abnormal region on or in the body. It’s such a great word because I don’t have to know what it is to name it. Is it a wound? Is it an infection? Either way, it’s a lesion!

This is the ear flap. It’s a very useful word because when we say ‘ear’ we can mean a lot of different things. To say ‘pinna’ locates the problem accurately.

Queen is the name for a breeding female cat. Also very suitable for cats generally, so why don’t we call the males ‘kings’? They think we should.

Pedantic fact: words with the ending -itis refer to inflammation, not infection.

Conjunctivitis & Cystitis, in particular, cause the most problems. In humans, they are usually infections and so words ending in -itis have become shorthand for the use of antibiotics. In animals, they can just as easily be allergic or idiopathic (see before) and antibiotics will be useless.

Just our name for the knee of four-legged animals, which is only on the hind legs just like us. See also carpus & hock.

Superficial means affecting the outermost layers, from the Latin superficies meaning ‘surface’.  It is the opposite of ‘deep’. It does not mean ‘unimportant’.

This is a male cat that hasn’t been desexed, castrated or neutered (i.e. he still has testicles). Tomcats have a distinctive smell, a round facial shape due to thickened cheeks, and an urge to roam and fight other cats. They are just as friendly to humans whether desexed or not.

A tumour is just the right name for any growth caused by cells multiplying but that doesn’t mean it’s terrible. For example, Poodles are often covered in small tumours called sebaceous adenomas that are completely trivial.

Not to be confused with yelping, this old word refers to the time when a bitch is having puppies. If you bring your boy in because he hurt his foot and started whelping I might begin to worry.

Next week, the last blog for the year: how to avoid online puppy scams.