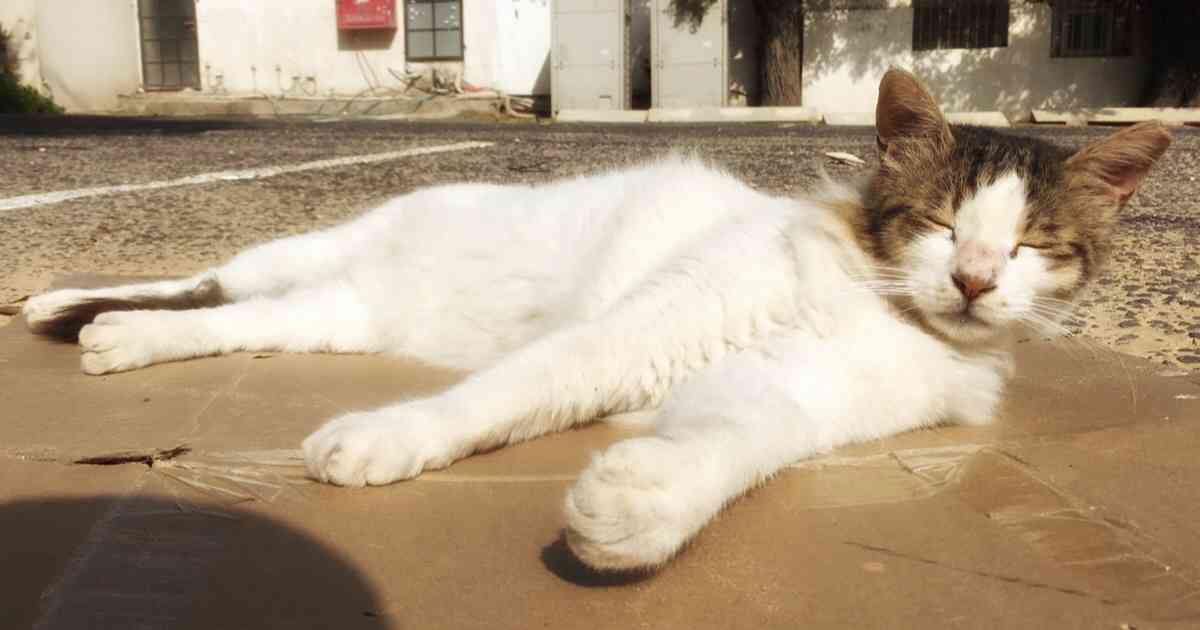 The picture below is Grouch. I guess he’s called that because of what he was, not what he is. Because what he is now is a house cat.

In fact, Grouch’s owners say that ever since he accepted his new life, he won’t go outside again. He may have grown up on the streets, but he’s never going back. Just look at his scars (plus the cuddles!) and you can guess why.

If you have a stray or feral cat hanging around, Grouch is a great model. He shows that the people who say feral cats can’t be tamed are wrong. With time and patience, these cats are anything but lost causes.

Several years ago I featured a college who defied the naysayers and turned around their feral cat problem. All they did was the same as Grouch’s new owners. It’s not rocket science, but it does rely on you being certain these cats aren’t owned by anyone else.

How To Tame Feral Cats

Here’s a simple plan for encouraging a stray or feral cat to become a pet.

I must stress that neither the college or Grouch’s owners did this. They just waited until the trust was almost complete enough that they could pick them up. My only concern with a slower approach is that females can have many litters by this time, with many more feral cats to catch.

I will add this note of caution too. Grouch will never be as healthy as a cat acquired as a kitten. He’s been exposed to a wide variety of diseases, most important of which is Feline Immunodeficiency Virus. FIV is likely to cause him to have a shorter lifespan, and he’s probably going to need a little more care.

It’s also important not to scaremonger too. He’s virtually no threat to the other cats in the house because he shows them no aggression. They are FIV-vaccinated as well, of course.

Why Does It Work?

There’s a secret trick at the heart of getting semi-wild cats to trust us: they are already programmed to do so!. Unlike Europe, all the cats that came to Australia were originally pets that went ‘native’. They were already domesticated.

Forgive me if I go on about this, but I’m quite obsessed by the difference between taming and domestication. Taming is taking wild animals and getting them used to people, usually by raising them as kittens or cubs. Domestication is a permanent genetic change involving loss of things like the fear response. It happens over thousands of years.

Domestication is why an adult feral cat is still able to like people, whereas an adult Scottish Wildcat cannot. It’s also why I’m quite against keeping novelty pet species just because we can, but that’s another story.

In attempting to adopt a feral it’s essential to realise that all cats are different. It’s likely that these genetic changes are not always fully present, and that early bad experiences can override them.

However, I will leave you with just one thing to keep in mind: I have never seen anyone fail. That’s pretty good odds, but I’m only talking about the people who knew to be patient and understanding.

So good luck! There’s a great reward in saving these poor cats from a short, squalid and stressful life.

Related: Getting Two Cats To Live Together | Feeding Strays & Not Catnapping