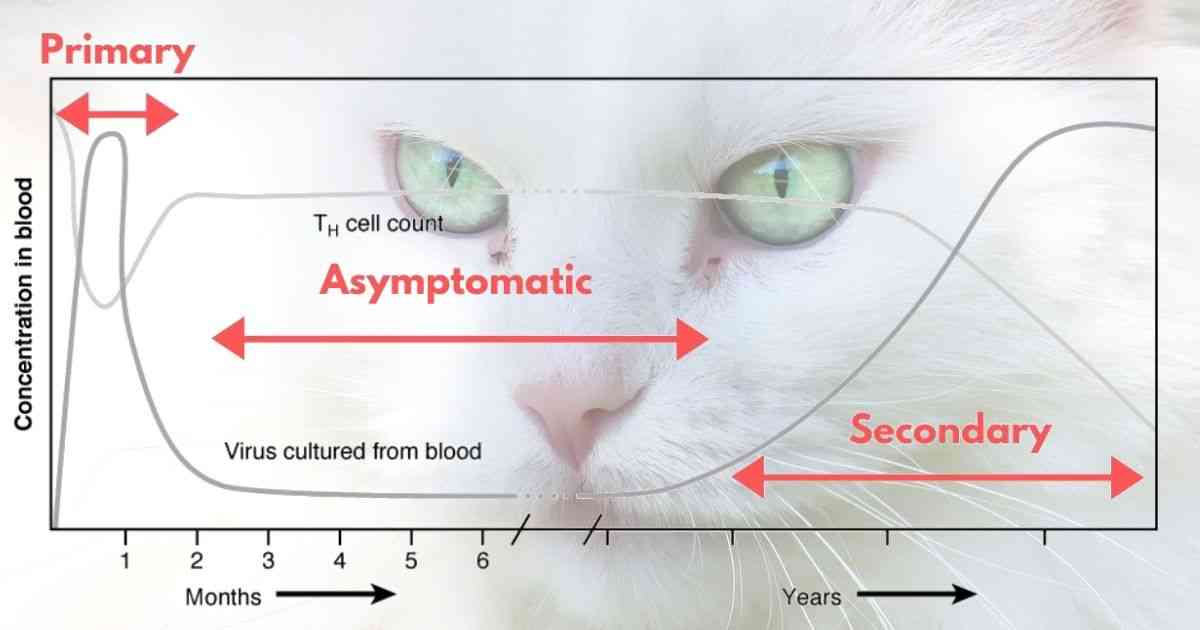 When I was young, like all kids, I wanted to know why everything happened. Having vets as parents, I can distinctly remember asking why male cats needed to be desexed.

“It’s because otherwise they fight so much that they get run down and die early.”

With the benefit of hindsight, this is pure folk wisdom. People could see that fighting was associated with sickness, but not yet why. Then, in 1986, hot on the heels of the discovery of the human AIDS virus, researchers in the USA put two and two together and found a feline AIDS virus in cats like these. We call it FIV.

FIV is Feline Immunodeficiency Virus, and just to be very clear, it cannot infect humans. Also unlike its human relative, we know that it’s been around for a long time. Testament to this is its evolution into related viruses around the world:

FIV is a retrovirus, which means it has an unusual trick: it reverse engineers a piece of DNA and inserts it into a cell’s own genome. Thus it hijacks the cell to start making copies of itself. That cell remains infected for life.

Problems come about because FIV has a preference for white blood cells. This means that over time it reduces the ability of the immune system to fight off infection.

How Contagious Is FIV?

FIV does not spread easily from cat to cat. In fact, transmission only usually occurs from deep bites during cat fights. Even then, a single bite is unlikely to result in infection.

Young fighting cats still have a reasonable chance of being virus negative. However, by the time a tomcat reaches six, it’s nearly certain he will have FIV if he hasn’t been kept inside. Infection rates are lower for females and desexed males, but still significant with outside access.

A cat with FIV almost never passes the virus to other cats in the house. That’s because cats that know each other rarely fight with the same intensity as cats who don’t.

Prevalence Of FIV Around The World

How common FIV is in cats depends on where you live:

The risk of infection is higher for males, older cats, and those who can go out. For example, FIV infects 15% of Australian cats over two years old who have outside access.

Beware vested interests (like vaccine manufacturers!) reporting higher rates. These are usually from groups of sick cats, or outlier studies not consistent with the mainstream.

Infection with FIV results in three phases of infection:

Diseases associated with immune suppression from FIV in rough order include:

Cats are a fundamentally healthy species. I begin to suspect FIV when I see cat with an unusual infection, an infection that seems worse than it should be, or a cat that gets repeated infections.

FIV is easily diagnosed in 10 minutes with a few drops of blood. Below are the published data for the three tests used in Australia:

Notice something? The first two tests are highly accurate, but the third has a low specificity. This means it is more likely to say a cat is infected when he isn’t (a false positive).

The gold standard is to use two different tests, but I avoid the SNAP test completely. It’s less reliable because it gives a positive result to cats who have been vaccinated. I’m always suspicious of a positive in any test within 6 months of vaccination, but the SNAP test stays positive for years.

The good news is that there is an effective vaccine against FIV. I always get asked why we have a cat vaccine, but not a human one. The answer is that FIV, by virtue of its age, has five stable serotypes, whereas HIV is still quite changeable. You need something predictable on a virus’ surface for a vaccine to work.

I recommend the FIV vaccine for all cats with unsupervised access to outdoors, and also for indoor cats prone to escaping or living with positive cats. Cats and kittens require three shots in the first year, followed by a single annual booster. If I’m starting an adult cat who could have been in fights, I always blood test them first.

In another blog, I have published the percent of Adelaide cats receiving FIV vaccination. It tells a story of changing cat lifestyles.

It’s important not to over-hype the vaccine. We know it helps, but it’s not 100% effective. Therefore, we still want to reduce the number of fights any way we can. The simplest way is for an outside cat to be kept in from dinner until after sunrise. Or to become an inside cat!

The quality of an FIV-infected cat’s care has a big influence on disease progression and survival time.

The mainstay of FIV treatment is rapid intervention in any health problems as soon as they appear. Illnesses in these cats usually deteriorate very quickly. Therefore, owners of FIV-positive cats are educated to never ‘see how it goes’.

It’s also essential that FIV-positive cats are kept inside to prevent further unnecessary spread of the virus.

Most cats with FIV-related secondary infections respond very well to treatment. Owners of infected cats can expect to visit their vet more than usual, but as long as they do so, things generally go smoothly.

Of course, this is not always true, and we observe that the life expectancy of FIV-positive cats is a little less than uninfected cats. Eventually, something unexpected like lymphoma or seizures might happen. However, owners can expect most cats to live past 10 years of age before this happens.

Therefore, we never give up on a cat just because they have FIV. Knowing this should help you feel relaxed if we ever suggest the test. Getting the result is the key to enabling owners to look after their cat better.

What about adopting or rescuing an FIV-positive cat? Once again, never fear. With love and care, these disadvantaged cats can go from a short and bleak future to a comfortable old age.