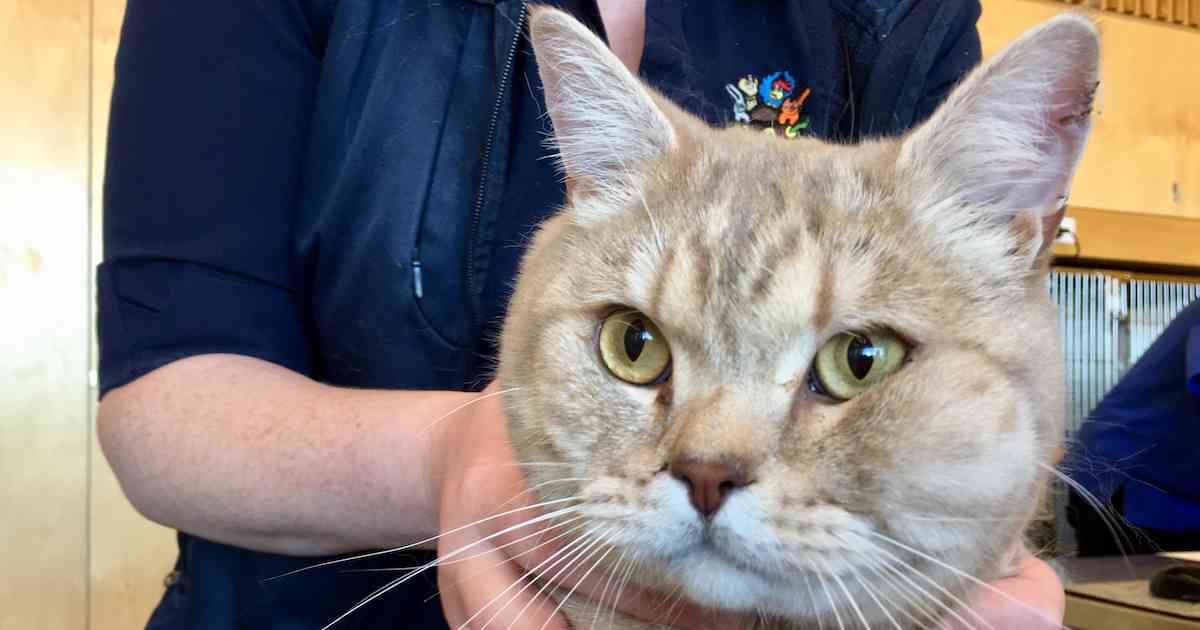 There’s just one common cause of a lump on a cat’s face. Have a look at the picture above. I hope you can see that the left cheek isn’t chubby, it’s swollen. This is an abscess and it needs veterinary attention.

What Is An Abscess?

An abscess is a localised pocket of infection that feels like a fluid-filled bump. It can occur anywhere on (or in) the body. In cats an abscess is most often found on the head, especially the cheek or jaw.

An abscess happens when infection gets under the skin and can’t drain away. Abscesses are almost always the result of a cat fight, but can also be caused by another animal, a grass seed or even a tooth root.

When two evenly-matched cats get into a fight, most injuries happen around the head for obvious reasons. An abscess on the back or rump might instead happen to a poor kitty who’s just trying to get away. Read about fight wounds on tails here.

What Else Could It Be?

An abscess is the only common explanation for a large lump that comes up quickly on a cat, especially if it’s sore to touch. However, other possible explanations include:

For it to be an abscess, the cat also should have had contact with other cats. You’ll see why in a minute.

Why Cats Get Abscesses

Cat fight abscesses are a direct result of three special features of cats:

Once bacteria get introduced, they rapidly spread in the low oxygen environment. The first sign is a hot, swollen and sore area we call cellulitis. This stage is usually missed unless it happens on a leg, where the swelling and pain are easy to see.

If your cat is lucky enough, cellulitis can be cured just with a course of antibiotics. That’s why it’s always a great idea to get a sore or limping cat to the vet straight away.

The formation of pus changes everything. Now the body literally starts building a wall around the infection that will eventually become the abscess capsule. At this point, antibiotics are helpful, but can no longer bring about a cure.

Once pus starts to appear, it’s like a foreign object. Antibiotics won’t penetrate and the body can’t easily remove it. If we don’t get it out it will find its own way to the surface. That’s not good.

The ‘natural’ thing an abscess does is for the skin on top to die and then to rupture. However, you should never let this happen. Here’s why:

So instead we lance a small incision, then drain and flush the abscess. This is always done after sedation and pain control. And unless it’s very late, we’ll do it the same day you come in.

Then it’s just a matter of keeping the small cut clean and finishing a course of antibiotics. If tablets are too hard, there’s even a long acting injection. Healing should be routine and uneventful.

If the abscess burst before you found it, don’t be too alarmed. An abscess on the body will often heal just fine as long as it’s bathed and antibiotics are given. What comes out can be quite bloody, but that’s just what pus looks like in cats.

If there’s a large hole, most vets prefer to surgically close the hole and place a penrose drain. Once again, a neat result and fast healing.

The picture above shows an abscess-related skin defect seen at Walkerville Vet in 2021. Although very large, it was still (just) able to be surgically closed.

Reasons To Be Careful

After all seems done and dusted, there’s still a reason to stay wary. Cat fights that lead to abscesses are probably the leading way for cats to catch feline immunodeficiency virus, or FIV.

There’s no better prevention for both abscesses and FIV than being kept away from other cats. I sympathise with owners who feel their cats need to be outside. I’ve even done it myself. But my final word is this: bringing a cat indoors can make a happy cat even be happier with just a little effort.

Please note: While I’m happy to give advice where I can, comments intended to avoid seeing a vet will be deleted without reply. There is no other sensible alternative.

66 Replies to “Facial Swelling In Cats”