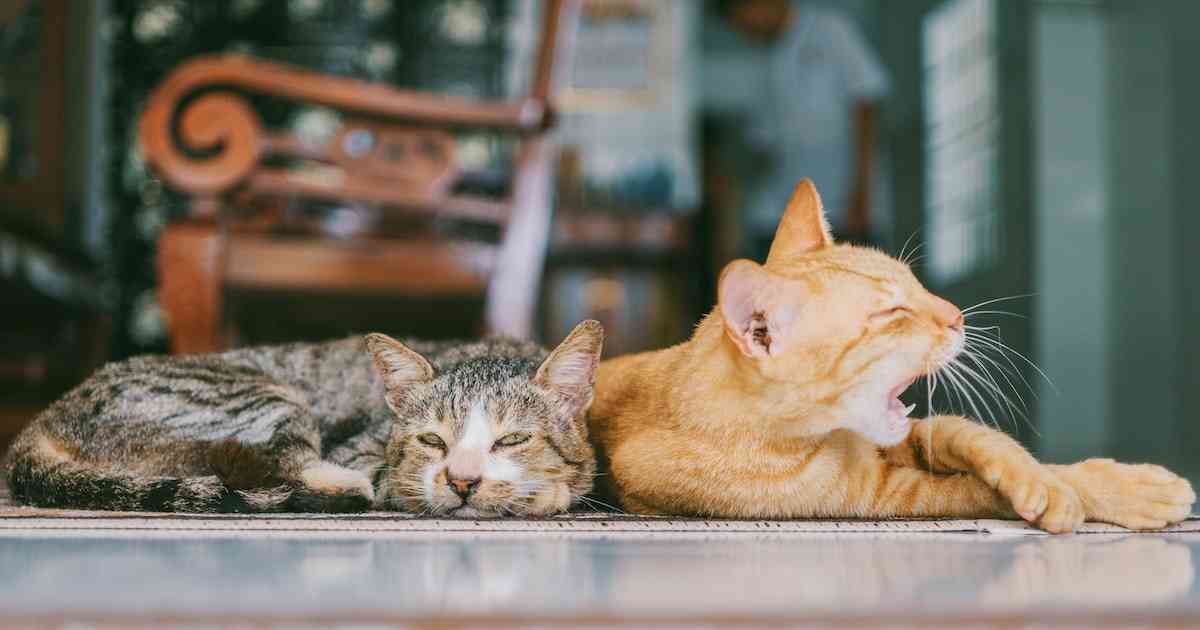 Finding it hard to introduce a cat to another cat? Well before you feel like a failure, try this experiment…

Go to an image store and search for cat images. There should be thousands. Now search for two cats. There might still be a hundred or so, but look closer. You’ll see that the photos fit into only four categories:

Finding a photo of two unrelated adult cats enjoying each others’ company is almost impossible. The photo above is one of the few, and even then these two still look like brother and sister. If you’re wondering how I can say this, visit our page on the sex-linked colours in cats.

So is it hopeless? Absolutely not. I’ve lived with up to four cats at a time without major problems. You might just need to adjust your expectations a little.

There are two strong evolutionary drives that stop cats being best friends:

However, the last ten thousand years has brought them into contact with each other thanks to us. This has already brought changes we don’t see in wild cats. It’s like they’re now stuck between two worlds.

It’s the fact they’ve changed at all that makes it possible to encourage two cats to get along. The most critical time is right when a new cat arrives.

How Adult Cats Can Get Along

Although it’s rare to get two adult cats to be good friends, it’s quite reasonable to expect them to be happy living together. The decisions you make from the very beginning really matter.

Whatever you do, don’t just put the cats together and expect them to sort it out. Relationships are built on trust, so if aggression flares early it could ruin everything.

A typical two week plan is as follows:

However, this approach alone isn’t enough for most cats. You have a high chance of failure if you don’t also consider some of the following:

The gradual introduction method works best for cats of similar temperaments, either both shy or both outgoing. The worst cases of disharmony I see are when there is one of each. The shy cat can easily be terrorised by what the outgoing cat considers normal behaviour.

I don’t have easy answers for these cases so whenever possible choose cats who are similar to each other. Gender doesn’t seem to matter as much as temperament. When you don’t have a choice, some other ideas below will help too.

There needs to be at least two of everything, and preferably three. This includes food, water, beds, resting places and especially litter trays.

A particularly important resource is your time and affection. Not all cats need it equally, but you should be alert to their needs, especially those of the existing cat.

The more complex the space, the less contact that cats need to have to deal with. This is especially important for resting places, which should be:

You can make lots of these and see which ones each cat likes.

I have written many, many ideas for making your house cat-friendly.

Active cats are less likely to be stressed or fighting with each other. Although a mouse plague would be ideal, there is no shortage of ideas and products to keep cats occupied.

We all know this in theory, but when one cat attacks another, it takes a lot not to react. Any negative intervention from you only makes matters worse. Cats will learn to associate your reaction with the other cat.

Many cats are happier if they know that they can get away and have a snooze without worrying about the other cat. Here are some ideas:

If you think things are already hard, wait until the neighbour’s cat works out how to get to your cat food. Or a stray cat starts staring at your cats through a window.

A strange cat will upset the delicate balance that is developing between your residents. Typically this quickly degenerates into ‘redirected aggression’ where aggression evoked by the stranger is turned onto the housemate.

Pictured are screens that an Adelaide client bought and fitted to stop cats inside seeing cats prowling outside. The effect was immediate.

If one cat is instigating conflict then you can tackle it directly. You need to be 100% sure so professional advice and videos are good here.

Once you’re certain, the aggressor can be asked to wear an ‘Elizabethan collar’ (the cone of shame), a loud jangly bell or a CatBib®. As a last resort I still occasionally use progestins for aggressive male cats but they carry a risk of diabetes.

Sometimes two cats will just never get along, just like two people. As sad as it is, you have to accept the reality of these cases and find a separate home for one of them.

However, with patience and care, nearly all cats will learn to get along. Most will just be happy to exist knowing there’s plenty of love, space, and food for all. A select few will be found sleeping together like the two at the top. If they do, send me a picture!