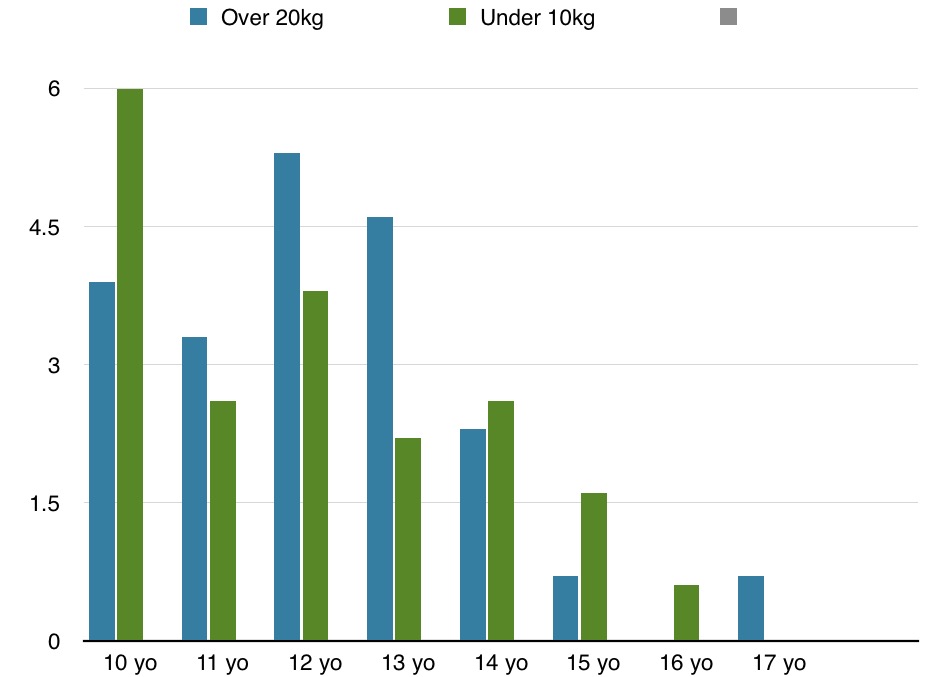 Everyone says large dogs die sooner than small dogs. You hear it on the TV, in the park, and it’s been said as long as anyone can remember. Just google this blog’s title and you’ll see what I mean. But is it true?

One thing is certain: if it isn’t true it’s a really dangerous myth. You may not decide to put a dog through a difficult surgery or chemotherapy if you think they aren’t going to live much longer. In other words, it may be a self-fulfilling prophesy.

Although I hear it most days, when Jasmine’s owner commented that he did not expect her to live much longer, I started thinking. Jasmine herself is already 13 and still enjoying life, and I could not recall our larger canine patients being very different to her.

Being a natural sceptic I had to check. So I crunched the actual data from our clinic and got the graph featured at the start. How? See later.

The results are striking, aren’t they? At ages 11+, 12+ and 13+, the large dogs are actually in front (though I am not claiming to prove this). After this, small dogs take the lead but the difference is only 4.8% to 3.6% and unlikely to be significant.

If large dogs were dying younger, there would be a lower percentage of older large dogs; you would see the blue line drop away more steeply below the green line

The results are clear: Large dogs do not die younger than small dogs. You heard it here first. Surprised? I would have been too.

So why do people think the opposite? I can come up with three theories:

One: These are the dogs we know are receiving good care. Large dogs appear to suffer more from the effects of arthritis. Both Jasmine and Mutley (nearly 14) are on multiple arthritis treatments (Mutley is enjoying his reward after a cartrophen injection). Twenty years ago, dogs like them would either have been euthanased or living with pain and severe disability. I have no doubt these results are only true for the modern veterinary options of the past 20 years.

Two: it remains true that giant breeds often have significantly shorter lifespans. We’re talking Wolfhounds, Staghounds, St Bernards, Great Danes, Mastiffs etc. rather than the more common large breeds. Remember though that I did include these dogs in the large dog group. It’s just that there aren’t many of them. Look up your dog breed’s lifespan here.

Three: when you hear of dogs living famously long lives, they seem to often be small breeds. Last year we farewelled Suzie Q, a Miniature poodle who lived to over 20 years old! These dogs are exceptional in every way but very few in number.

So the important message is this: don’t be put off owning and loving a big dog, and don’t give up on them. I have shown today that if you are a dog in Adelaide receiving veterinary care it doesn’t matter what size you are. You are going to live to a very similar average life span if you have the chance.

So how did I get the data?

In the age of big data, even a small clinic has at their fingertips the means to check this sort of belief. We have around 2000 active canine patients, so surely among these we could find evidence to either support or refute the idea.

To make the results clear, I selected two separate groups: all dogs under 10kg (the ages most famous for long lifespans) and all dogs over 20kg (the weight at which we start calling dogs ‘large’), even including the giant breeds. In between 10 and 20kg, the results should be similar but my aim was to compare small and large.

I then calculated each age group as a percentage of the total number of dogs in that group. The graph shows the percentage of dogs at our clinic currently at or above each age. So the data point for 10 years shows the number of dogs 10 years or older shown as a percentage of the dogs in that weight range (this is why the curve drops steeply; because the next data point excludes the 10 year olds). To ensure all the dogs in this study are alive I selected the data using only dogs still buying and using our heartworm prevention, even though this is only a portion of the dogs we see. We came up with good numbers: 497 dogs under 10kg and 304 dogs over 20kg.

You may be wondering why I haven’t used the data from all the dogs we’ve seen in the past 15 years (over 10,000). The problem is, this data includes many dogs who have moved away, and so we don’t have reliable lifespans. Also, our computer system doesn’t allow us to generate a report showing the age of our dogs; it only lets us search for dogs in a specified age range. Please note that I am not claiming statistical significance. If anyone wants to perform the necessary stats, I have included the raw data below. I believe my findings are valid but I am very happy to receive feedback, corrections or advice.