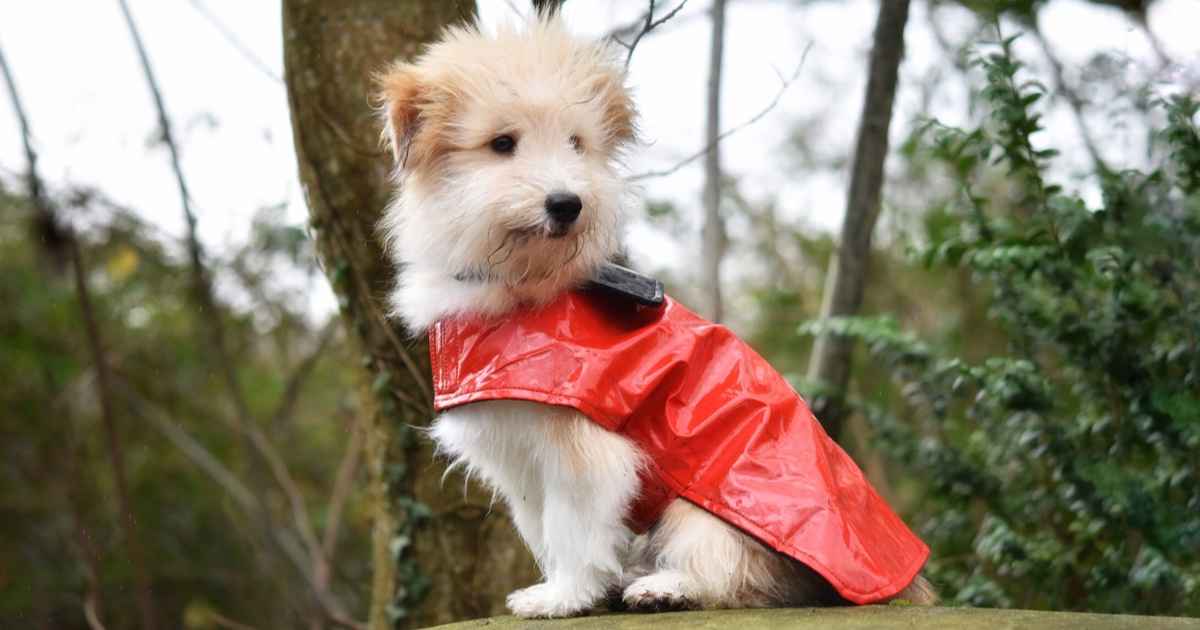 Have you ever heard people say that? Well, thirty years ago I used to say it too.

I’ve gone from someone who thought dog jackets were silly and pretentious to wanting more dogs to wear them.

Why? Let’s start with that old wolf-versus-dog chestnut.

The Wolf vs The Dog

Are dogs are really only house-wolves? If they were, they certainly wouldn’t need coats. Modern scholars, however, say no. Here are just three reasons why:

Here’s a typical wolf. What I want you to see is the way snow can just sit on the coat without melting.

A wolf’s coat is double-layered; rough guard hairs on the outside keep the warm air trapped in the inner downy hairs. It’s so effective that this wolf can be warm at the skin while it’s freezing on the outside.

Now compare this wolf to the dog at the start. Many breeds still have a double coat but that’s not one of them. The critical fact is that most dog coats have been bred based on how they look, not what they do.

Another sign that some dogs need coats only appears when two dogs live together.

Dogs of different breeds and ages often tolerate cold very differently. One dog may sit right against the heater while another can be outside chewing a bone in the rain. What you notice again and again is that they’re always the same types of dogs.

The fact that I can predict which dogs will do this means there’s something real going on. Instead of saying “that dog’s soft” we might start thinking, “these two dogs feel the cold differently.”

What finally changed my mind for good was watching dogs under anaesthetic. As part of routine monitoring, we measure core body temperature. Needless to say, we always use Bair-Hugger-type warmers and body wraps. When we didn’t, here’s what happened:

Put those three together and you can see why Chihuahua breeders used to say that their puppies reacted badly to anaesthetics. Once conscious control is removed, it’s easy to see how some dogs lose heat faster than others. That means they’re likely to be fighting harder when they’re awake.

The following dogs are likely to be more comfortable wearing coats in cold weather:

Single coats are so common that it’s easier for me to tell you which dogs have double coats. There’s a list at the end.

A common mistake I see is letting the coat of a Poodle cross grow out over winter. Not only is the effectiveness of this debatable, but the coat gets matted, the skin gets unhappy and it’s much harder to remove later.

I think these dogs are made better off by clipping year-round and adding a coat in cool weather.

I don’t sell coats but I see them every day and have a fair idea which ones are best.

First, I stress the importance of washability. Wool and oilskins look good, but they’re harder to clean.

Second, the fit is important. If it’s too tight, the dog will resent wearing it. Too loose and it turns into a skirt.

When To Wear A Coat

The best temperature to wear a coat will depend on the dog and the situation. I advise a coat for cold-sensitive breeds when it gets below 14 degrees celsius or 57 Fahrenheit. In southern Australia, that’s most nights in winter.

If a dog will be in the wind or rain, that number should be more like 18 degrees, whereas if the dog can bask in the sun, it could be down to 10.

As the temperature drops further, even breeds considered to be cold-tolerant will eventually need coats. Most importantly, always look at your dog’s body language for signs of being uncomfortably hot or cold. On the right dog you can usually see when they enjoy wearing a coat.

Keeping That Coat On!

What about those dogs that keep taking off their coats? Some of them will just be telling you they feel fine without them. My Loki is one of these; you can always tell when the night was warmer than expected by where his coat isn’t.

Then there are the other dogs that benefit from coats but still take them off or destroy them. It can get quite expensive, not to mention frustrating. My old dog Tinker won’t tolerate anything so all I can do in winter is make sure he’s inside.

That’s the other trick, of course. Even if your dog fits the description above, there are alternatives. Plenty of dogs wouldn’t know what being ‘outside’ feels like. Others, like the dog at the start, might not even need a coat if they’re keeping warm by exercising.

Perhaps all I’m really asking is this: that we throw out the dogma and try to imagine the world from our dogs’ point of view.

Related: Can Dogs Live Outside?