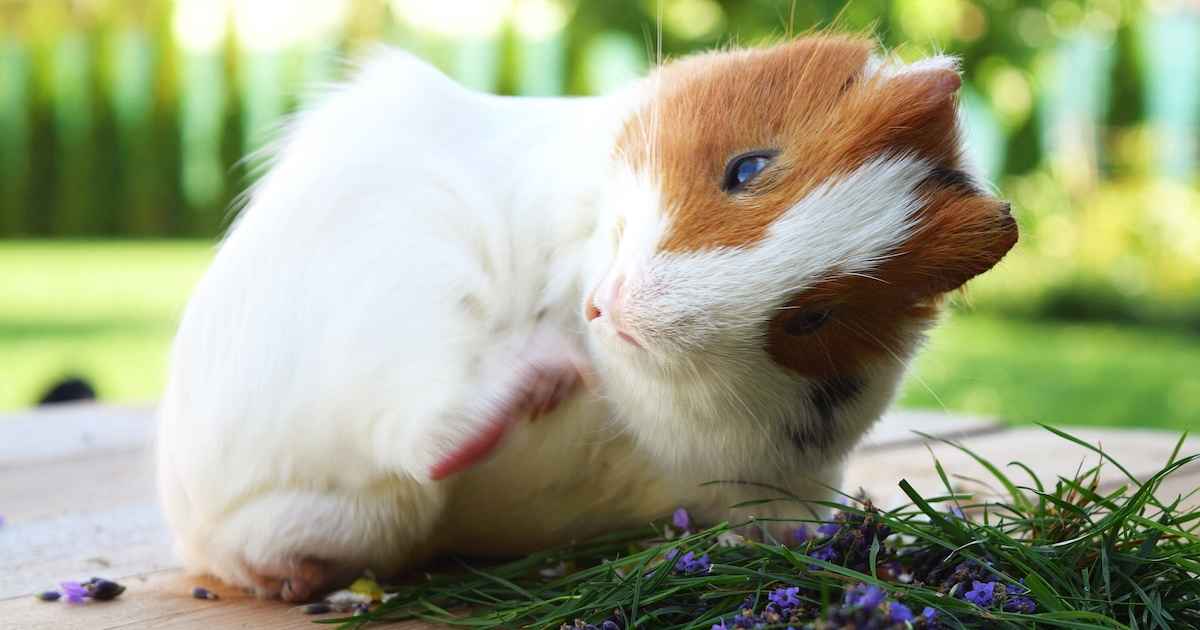 The most common health problem in guinea pigs is itching and scratching caused by mites. It’s a simple problem with a simple solution. However, as you’ll see, there’s also a lot of rubbish being said.

Of the three, lice are the least serious. They cause obvious flaking and dandruff, but less itch or hair loss. They can (just) be seen with the naked eye.

Ringworm is a fungal infection that causes extensive hair loss, but is also less itchy and a lot rarer. Of the three causes, only ringworm can cause serious infections in people. I’ve seen some terrible cases, so if you start getting sores too, it’s time to see a doctor!

Hair loss in older females can also be caused by a hormonal imbalance due to ovarian cysts. Then there’s the normal hairless patch behind their ears that often gets confused with mites. In both cases, the affected skin appears smooth and healthy.

Guinea pig mites (Trixacarus caviae) are very similar to the human scabies mite. They are microscopic, and burrow in the skin. Signs of early mite problems include:

Then, if the problem isn’t treated, the damaged skin begins to break open. This leads to bleeding sores, twitching, weight loss and seizures in severe cases. Death can even ensue if enough of the skin has been damaged.

Where Mites Come From

There’s a persistent myth that mites come from hay, straw or bedding. The idea came about to explain why mites seem to come out of nowhere. The truth is that mites are spread by healthy carriers.

Most of the cases I see start after a new guinea pig is introduced. Then one or another of the existing cavies starts scratching. It’s also possible for a hidden infestation to break out during times of illness or stress. A good example of this is pregnancy.

How To Treat Mites In Guinea Pigs

Sprays and lotions are a waste of time and money in my opinion. Unless the drug gets in the bloodstream it doesn’t seem to get all of the mites.

The mainstay of treatment is a systemic anti-parasite drug. Here in Australia we use ivermectin as an injection, which also works well for lice. Two doses are given 10 to 14 days apart; the first kills the adult mites, the second kills the hatched eggs before they lay eggs of their own.

It’s important to treat every guinea pig, whether affected or not. If you are taking one pig to the vet, it’s therefore best to take them all. Most vets will charge just one visit fee to do the lot.

What I never do is ask owners to clean, sterilise or throw away cages and bedding. I completely reject the idea that the mites can live far from guinea pigs. I have treated thousands of cavies without ever having a treatment failure. All I ask is a regular spring clean and change the litter.

So if you suspect mites, don’t despair. Since the development of ivermectin, parasitic diseases are the best sorts of skin problem to have: curable ones! So see your vet and it’ll be sorted in no time.

6 Replies to “Help! My Guinea Pig Has Mites”