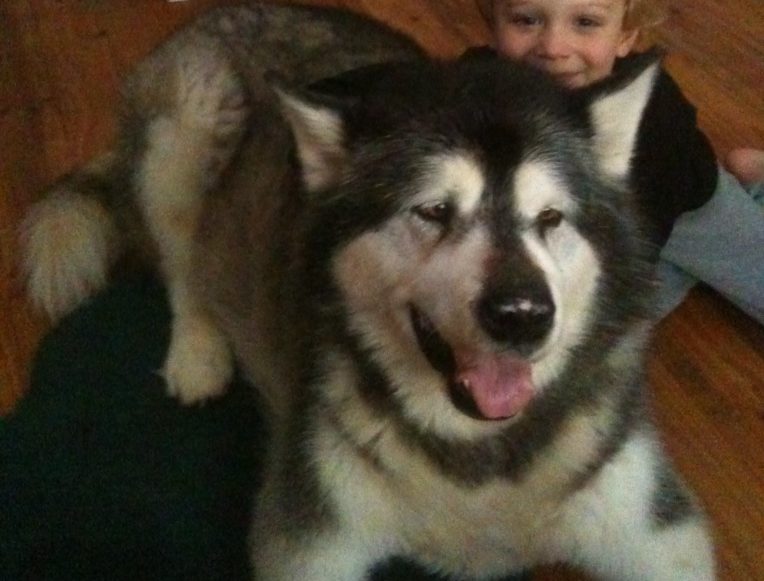 We’ve known Mia since she came bounding in to the clinic twelve years ago and started stealing our soft toys.

These days she still has a go but though she’s a puppy at heart, she’s old and has significant arthritis. However, her quality of life is good. A few weeks ago, her owner noticed Mia being a bit unsteady and wondered if it could be the arthritis treatment. We thought that was unlikely and so did a home visit to check on her.

The physical exam seemed OK but we took a blood test just to be sure. The blood result showed mild anaemia; not enough to be obvious, but possibly the cause of the symptoms. Anaemia in dogs is very unusual and immediately made us worry she had a bleeding disorder. There was no access to rodent poisons so we considered a ruptured splenic tumour to be the most likely given her breed and age. We recommended an ultrasound exam, which confirmed the presence of blood in the abdomen and a large mass growing from the spleen.

There were only two options; euthanasia or surgery. Mia’s owner was understandably reluctant to put her through such a major surgery especially with her other problems. However, our independent advice was that it was worth doing, as the tumour appeared to not have spread and Mia’s health would easily cope with the anaesthetic and surgery.

Mia had surgery shortly afterwards. Her spleen plus haemangiosarcoma was removed, and inspection of the abdomen confirmed the ultrasound findings of no visible metastasis. Her recovery was good, but she certainly had trouble getting up out of her hospital kennel the next day, and the trip home was quite stressful for her owner.

The pictures show her last week when we took her sutures out. She’s back to playing again and is brighter than she’s been for some time.

There are many stories of dogs and cats just like her who have had major surgery at an advanced age. Most of the time, their owners are glad they did it. There’s always the chance they won’t have much more time, but if we carefully assess them beforehand, we can reduce that risk. We won’t ever recommend something we don’t genuinely feel will make a valuable difference to their quality of life.

I know I shouldn’t end on a sad note but the same day as Mia’s surgery, we saw a second dog with the same condition. His ultrasound showed that the cancer had spread and there were secondary metastases in the liver and abdomen. For him, all we could do was make him comfortable until it was his time. His owners loved him dearly, and would never have wanted him to have unnecessary surgery. All of us as pet owners have to face this; we as vets deal with this a lot but it’s never easy. If you leave them a message in the comments I’ll make sure they hear it.

Follow Up: A year later, Mia is still going strong. These days we do house visits as she has trouble travelling but she’s just as happy. She even needed another tumour removed, this time on her skin.