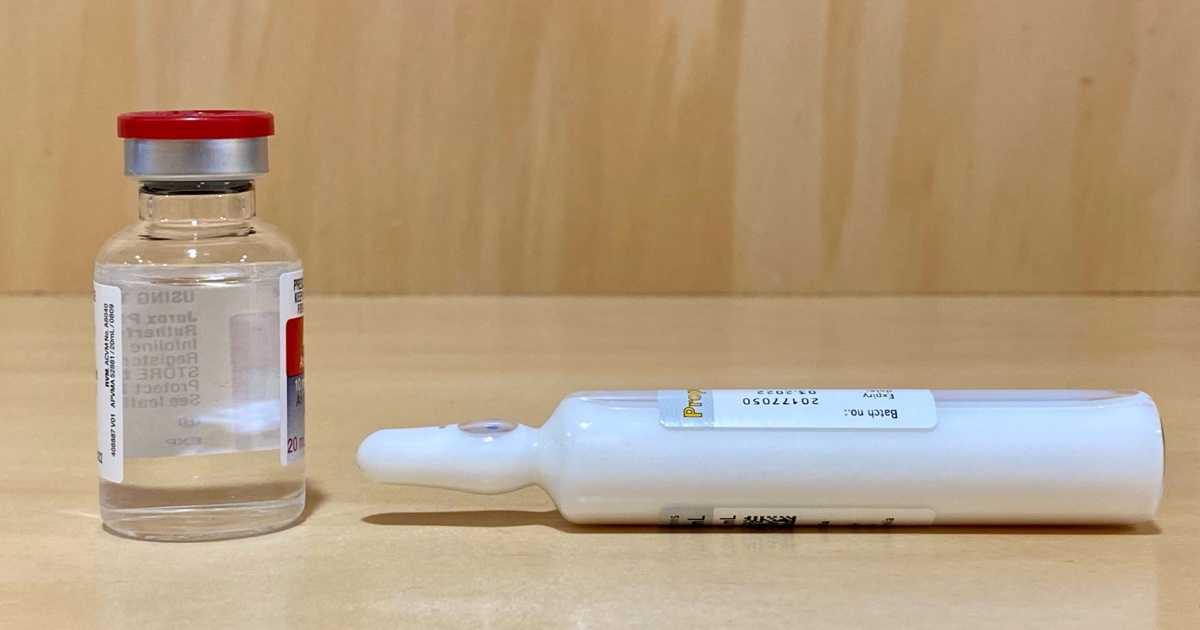 In 2021 there are two drugs your vet may use to anaesthetise dogs and cats: alfaxalone and propofol. You can discover more about each one at the links, but here I will compare them for safety and efficacy.

Both drugs are most commonly used in the following sequence:

Under this use, alfaxalone and propofol are called induction agents. Another, much rarer use is in total intravenous anaesthesia (TIVA) which I will not discuss here.

Both drugs are pictured above. Propofol is a white liquid sold under many brand names whereas Alfaxalone comes as a clear liquid branded Alfaxan® or Alfaxan® Multidose.

Due to the potential for bacterial contamination, after opening Alfaxan® and propofol should be refrigerated and used within 24 hours. Alfaxan® Multidose has a potential life after first use of 30 days if stored correctly.

Currently only propofol is used in human anaesthesia. Alfaxalone is commencing phase three clinical trials in Australia under the brand name Phaxan™.

* Propofol is also available for veterinary use as Aquafol®, a clear liquid in a 100mL multidose vial. This product is know to cause an anaphylactoid type skin hypersensitivity in some dogs and cats. Such reactions primarily consist of transient swelling, urticaria and redness around the head, abdomen or other body parts.

Both agents cause a fast, smooth and predictable loss of consciousness. In humans, propofol is sometimes associated with pain on injection. This has not been observed in animals, possibly due to the widespread use of pain relieving premedicants.

Propofol has a shorter duration of action, meaning that occasionally ‘top-up’ doses are required before the inhaled gaseous anaesthetic takes effect.

Overdosage is extremely rare with either drug, as they are given ‘to effect’. This means that the drug is slowly injected until the right level of anaesthetic is achieved, and any remainder discarded.

In situations of neglect and inattention, where excessive doses are given, alfaxalone has greater safety.

Alfaxalone and propofol are equally safe.

Both drugs are known to cause post-induction apnoea, which is a transient suppression of respiration. This is routinely managed by manual ventilation (‘bagging’) for 30 seconds to 2 minutes after induction. Its incidence may be reduced with alfaxalone by slow intravenous injection.

There is no difference observed in any of the following:

Alfaxalone leads to a short-term increase in cortisol production in healthy cats as compared with propofol but its significance is unknown. Alfaxalone results in a slightly lower body temperature, although the difference of 0.3 °C is probably insignificant.

Both drugs give a rapid return to consciousness. Recovery from alfaxalone takes slightly longer than propofol but the difference is small (6 vs 2 minutes to sitting up). During longer anaesthetics where gaseous agents are used for maintenance, there is probably no difference as the induction agents will have been fully metabolised.

Quality of recovery is better for propofol. Animals recovering from alfaxalone are known to sometimes have tremor, vocalisation or leg paddling, and may be more noise sensitive. These events are short lived and typically last less than 2 minutes.

Use In Caesarian Section

During caesarian section, alfaxalone gives higher Apgar scores in the newborn puppies. However, no difference in neonatal survival is documented between propofol and alfaxalone.

Both alfaxalone and propofol are equally safe in Greyhounds and Whippets due to minimal accumulation in body tissues. This is in contrast to barbiturates such as thiopentone, which should no longer be used in developed countries.

Propofol must be given intravenously; if given subcutaneously or intramuscularly it does not appear irritant but will be ineffective. By contrast, alfaxalone can be used as an intramuscular premed or induction agent for cats and other smaller animals. This use is limited by the large volume required.

Both alfaxalone and propofol are appropriate choices for a wide range of anaesthetic uses in dogs and cats. There are few or no significant differences and the use of either drug provides excellent safety.