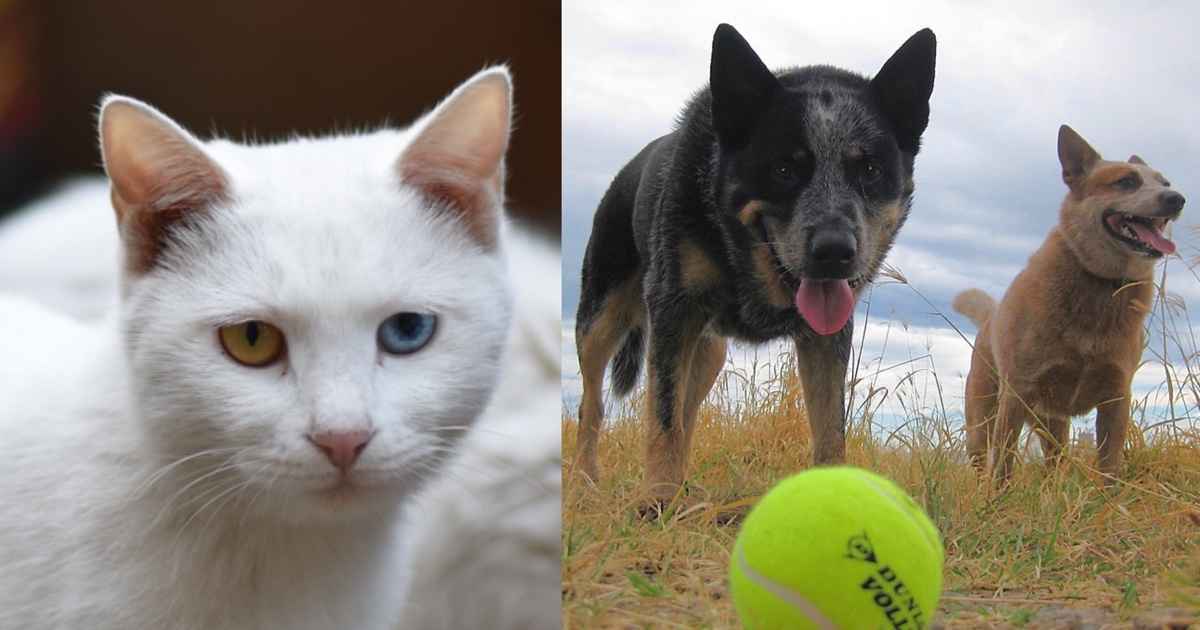 Are you worried your new puppy or kitten might be deaf? Read on to find out if your pet might be affected.

For more information please also read our guide to deafness & hearing tests in dogs and cats.

Why Pets Are Born Deaf

Did you know that certain coat colours are linked with nearly every case of congenital deafness in dogs and cats? By knowing this we can start to predict when deafness might be likely. But why on Earth does it happen?

It’s due to the importance of pigment cells in normal ear development. Animals lacking these melanocytes on the exterior are more likely to not have them in the ear as well. It’s a bit like a lottery.

Most of these animals are white or have large unpigmented areas and are just unlucky that the ear misses out too. It’s more common to have just one deaf ear, but of course, you won’t notice that. For both dogs and cats, having parents who are deaf further increases the risk.

Which Cats Are Born Deaf?

It’s been known for hundreds of years that cats with solid white coats are more likely to be deaf. The numbers go even higher if the cat has blue eyes as well.

Deafness in one ear is often not detected without specialised testing.

Pure breeds such as the Siamese, Ragdoll or Chinchilla aren’t affected in the same way. Their colours are governed by a different process.

Which Dog Breeds Can Be Deaf?

Certain coats are also linked with canine deafness, especially white or merle. However, even with these patterns, usually only a small percentage of each breed is deaf in both ears.

For most breeds, information can be lacking; for example, I would expect that merle Coolies (pictured) will be affected much like Cattle Dogs and Aussie Shepherds but we just don’t know.

Here’s what we do know about breeds prone to deafness.

Older studies show that 7 to 8% of Dalmatians are completely deaf, The risk goes up if one or both eyes are blue. Although Dalmatians are usually born without spots, having a pigmented patch at birth reduces the risk significantly.

A more recent UK paper found that the prevalence in Dalmatians has reduced to 4.4%, presumably due to selective breeding.

3.3% of Cattle Dogs or Heelers are deaf. If you choose puppies with double facial masks or large body spots as pictured, you will reduce the risk to around 1%.

Here’s a thought: I heard from a client of folk wisdom that Cattle Dogs with pink palates are hard to train. Could it be that these dogs are more likely to be deaf in one or both ears??

5.4% are affected with a weak link to red coats over blue coats. The study authors were also suspicious that the trait was linked with coat speckling but this could not be proven.

2% of white-coated Bull Terriers can be expected to be deaf. Non-white varieties do not appear to be affected.

Although it’s often discussed, only 0.5% of Border Collies are completely deaf. The risk goes up to several percent for merle Collies and higher again for dogs having one or two blue eyes. Dogs with over 50% white on their heads should also be checked for deafness.

White Boxers are a special case. They usually aren’t deliberately bred but regularly appear by accident from any Boxer carrying white genes. I have heard unconfirmed stories of these dogs being euthanased and we certainly don’t see them very often. Those that we do see are often deaf but just as happy.

Worried your pet might be deaf? Now read our guide to living with a deaf pet.