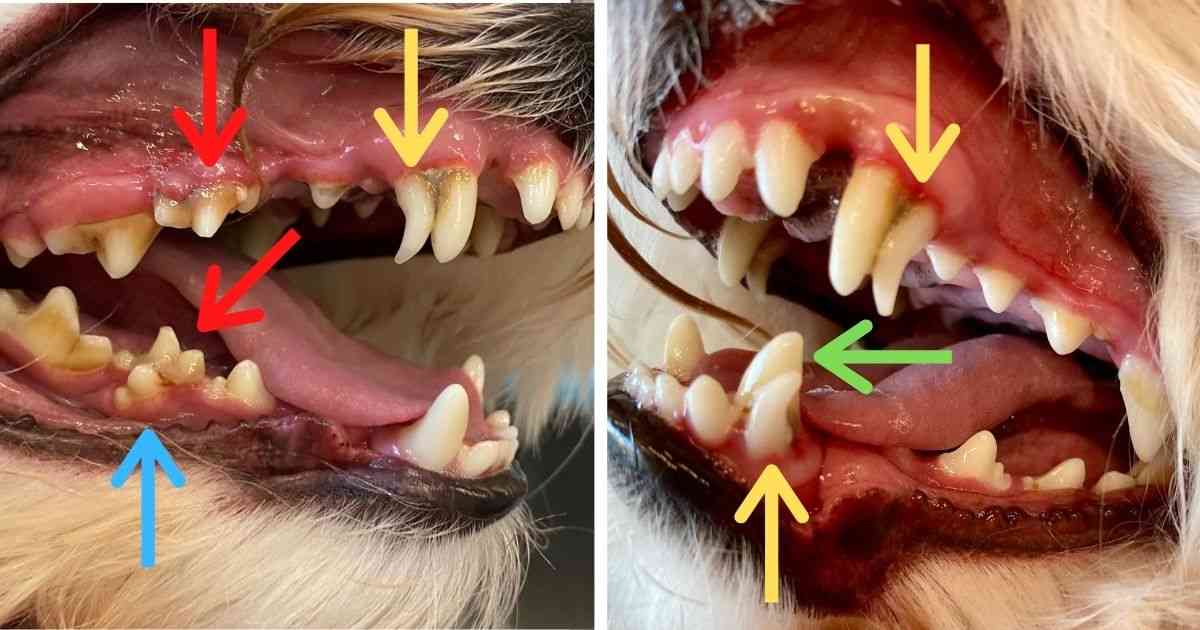 When puppy teeth develop properly, each tooth finds the gap it needs and they all end up being perfectly spaced. But what you see here is what happens when there are extra teeth in the way. These are persistent deciduous teeth and if not treated correctly they often lead to major problems.

What Are Persistent Deciduous Teeth?

Between three and six weeks of age, most puppies grow a temporary set of teeth. These are called deciduous because, just like the leaves of deciduous trees, they are destined to fall out. Their replacement by permanent adult teeth goes according to the following timetable:

Due to the variation between dogs, I will usually add an extra month just to be sure. A persistent deciduous tooth is one that is still present beyond these times. We also call it a retained temporary tooth.

What it is not is a supernumerary tooth.

Don’t be fooled by the common use of the term supernumerary. This refers to extra teeth above the usual 42, and is much, much rarer. When they occur, supernumerary teeth are mostly in the permanent adult set, and can cause severe local overcrowding.

By contrast, a retained puppy tooth has outstayed its welcome. By not being lost, it occupies the place where its permanent replacement is meant to go. This generally forces the new tooth into an abnormal position.

It’s vital that puppy owners know what to look out for.

The Problem With Extra Teeth

Now have another look at the picture from the start. It shows the consequences of having persistent deciduous teeth for some time.

The yellow arrows show retained temporary canine teeth. In the upper jaw, the misplacement of the permanent tooth (in front) is minor. The big problem is the accumulation of food, plaque and tartar you can see between the double canine teeth. With time, the resulting periodontal disease will lead to either the loss of both teeth, or at best, a need to frequently clean the area under anaesthesia.

In the lower jaw, the consequences are even worse. The green arrow shows where the adult canine tooth usually goes when it can’t sit in its normal place. This causes either a malocclusion where the teeth clash with each bite (the same mouth is shown closed here) or the tooth is pushed further in and makes a hole in the hard palate. Either outcome can easily be avoided.

The red arrows show persistent deciduous premolars. Just like retained incisors (front teeth), these often form a double row of teeth as seen here. In the upper jaw the permanent tooth is hidden behind, and in the lower jaw, the blue arrow points to the abnormal position the permanent premolar ended up taking. Once again, the overcrowding will lead to malocclusion or periodontal disease.

When To Fix Retained Puppy Teeth

The best way to prevent problems is to remove the deciduous teeth soon after they would normally have been lost. Then the new teeth can find their way without obstruction. It’s especially important with the lower canine tooth.

The picture here shows the mouth of a 5 ½ month old puppy. As you can see, the deciduous lower canine is still present and the the tip of the erupting permanent canine is visible behind it.

The temporary tooth needs to be removed or the new tooth will be mis-directed. However, the removal must be done with great care to avoid damaging the root of the growing tooth very close behind.

For this reason, with upper canines, as long as the malocclusion is minor, I’m comfortable leaving them a little longer. I recommend they are removed when the adult permanent canine is fully grown. This also gives them a little longer to fall out by themselves.

With incisors and premolars, it depends on the situation. If they deviate the permanent tooth (like the blue arrow), then removal is urgent. If they form a harmless extra row of teeth in front (like often happens with incisors), then I’m happy to wait until the other teeth are mature.

Waiting any longer gets a lot harder and risks permanent problems. While I can still help the dog from the start, he’s now better off at a dental specialist.

There’s almost no better example of ‘a stitch in time saves nine’ than the correct treatment of deciduous puppy teeth. If you watch your puppy’s mouth developing, and it doesn’t seem right, it probably isn’t. Get in touch with your vet straight away and there’s almost nothing to fear.

One Reply to “Management Of Retained Puppy Teeth”