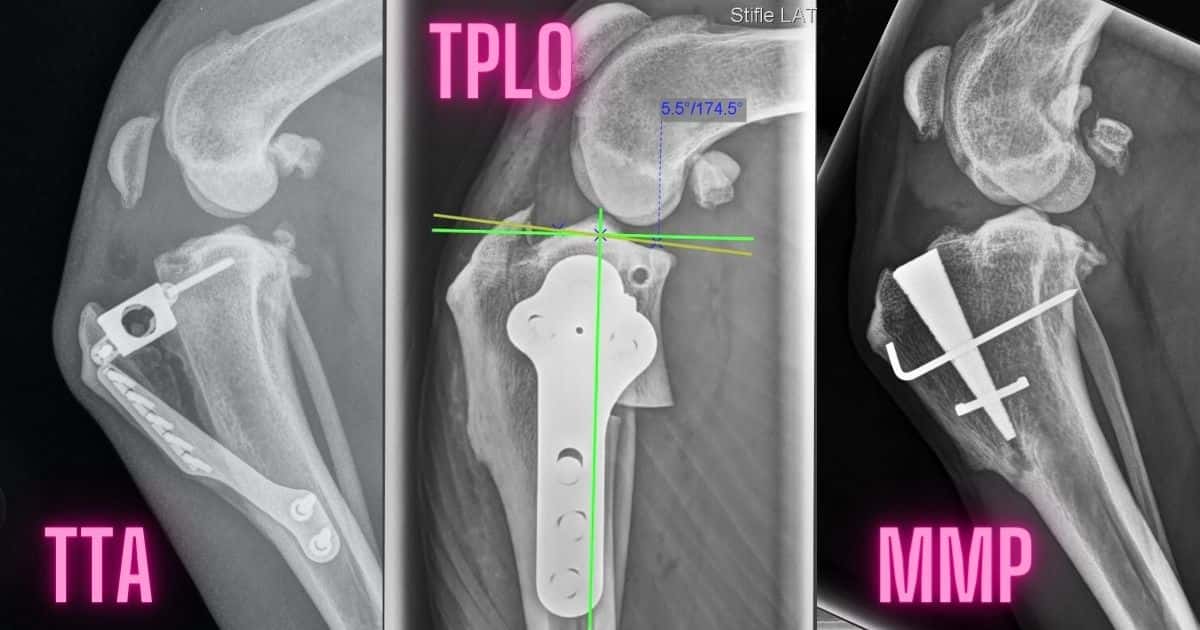 So your 15kg dog has torn an ACL You know that a lateral suture technique is no good at this size. One vet has told you need an MMP, another a TTA and. third a TPLO.

What do all these random letters mean for your dog? Which one is better?

Here you won’t find an opinion; you’ll find the facts from research papers that compare these cruciate surgery techniques. This is the most-studied surgical procedure in veterinary science.

The Difference Between TPLO, TTA & MMP

Although they are quite different, each procedure involves the cutting and reshaping of the tibia. This is the shin bone that makes up the bottom half of the knee joint.

The Tibial Plateau Levelling Osteotomy is a curved cut that allows the weight bearing surface of the joint to be rotated from a sloping into a neutral position. The cut is then stabilised with a plate and screws.

The Tibial Tuberosity Advancement moves the attachment of the patellar tendon forward so that it partially offsets the lost force of the cruciate ligament. The advancement is stabilised using a variety of cage-like implants.

Essentially, the Modified Maquet Procedure is a version of the TTA that claims greater stability and simplicity. It uses a titanium foam wedge.

At this point you could well ask, “why so complicated?” Why don’t vets just replace the ligament like in humans?

The answer is that poor outcomes have made vets search for better methods. The De Angelis or lateral suture technique is an older procedure that attempts an artificial ligament, but it has a very high failure rate. We do not use it in dogs above 10kg at Walkerville.

The newer procedures are clearly better. The only question should be: which one is best?

TPLO vs TTA In Dogs

The results of three studies and one large review suggest that the TPLO gives better objective* lameness outcomes with a lower risk of complications. However, TTA gives faster recoveries in the period shortly after surgery.

Here’s what they found:

It is essential to stress that although these differences are real, they are not large. All dogs improved substantially, the only difference being by how much. A good TTA performed by an experienced surgeon is almost certainly better than a poor TPLO.

* By objective we mean outcomes where the improvement is measurable and not subject to opinion, such as the amount of weight being placed on the leg.

TPLO vs MMP In Dogs

As the Modified Maquet Procedure is relatively new, there is limited evidence thus far. It is biomechanically comparable to TTA but easier and faster to perform and may provide more stability.

The results of a single comparative study suggest that dogs with TPLO reach a slightly better overall outcome than dogs with MMP. Patients with TPLO reached 84.8% and 89.9% of normal ground reaction forces at 3 and 6 months, versus 79.85% and 84.5% for MMP.

I suspect that in time we will see that the MMP outperforms TTA but we have no evidence thus far to back this up. It should also end up being a cheaper procedure.

Which Is Best: TPLO, TTA or MMP?

Based on the evidence, it is reasonably clear that the TPLO gives better results. Therefore, it should be no surprise that experts in the field overwhelmingly choose the procedure. A survey in 2016 found that 78.6% of respondents from the US Veterinary Orthopedic Society use TPLO.

However, the differences are not great. All three procedures give excellent results, and arguing over which is best is a bit like debating over Apple vs Samsung when your previous phone was a brick.

It’s far more important that you have a trusted vet. I would avoid shopping around if you already have a good relationship. If you choose any of TTA, MMP or TPLO, you are doing an excellent job and your dog will be the winner.

Disclaimer: whichever procedure a vet uses, they tend to sing its praises. I would like to believe I chose TPLO because of the evidence, but it’s possible that this article reflects my bias. I welcome any comments and will do my best to keep the evidence up to date.

You can find the cost for TPLO and De Angelis procedures here.

Click here to learn why dogs tear their ACL.

One Reply to “Which ACL Surgery Is Best For Dogs?”