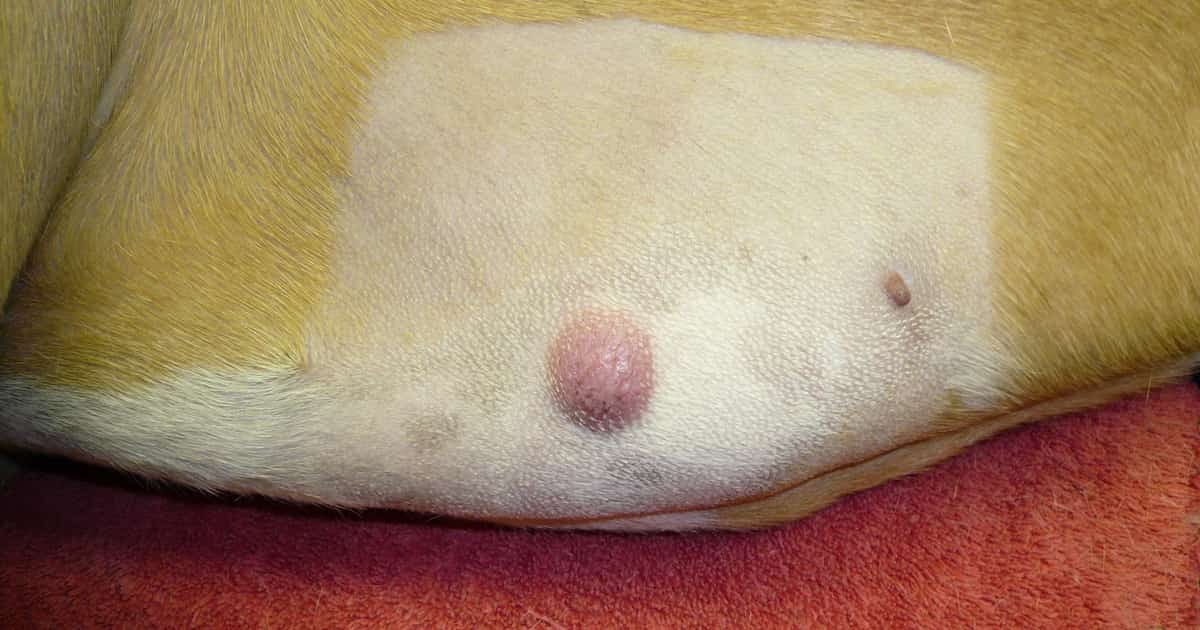 New treatments for mast cell tumours have given dogs better chances than ever before. Here you can find out how to recognise a mast cell tumour and what to do if your dog has one.

Just a warning: this is no one-size fits all treatment!

What Is A Mast Cell Tumour?

Mast cell tumours (MCTs) are the second most common malignant cancer of dogs, and the most common on the skin. They can vary from a cyst-like lump under the skin to a nasty red raised mass, and affect up to 20% of dogs.

Certain breeds are more likely to develop mast cell tumours, but any dog can get them. The most at risk are:

Due to where mast cells are generally found, most tumours in dogs are located either on or just under the skin. More rarely they can be internal in the liver or spleen.

The pictures here and above give a good idea of what MCTs look like. However, there’s no way to be certain without a checkup and testing.

MCTs are one of the rare tumours where it’s possible to make a rapid diagnosis at the first visit. A simple fine needle aspirate (FNA) or needle biopsy is all it takes. Once stained and examined by your vet or a pathologist, it can show the characteristic granules inside the cells.

A better, but more invasive test is the incisional biopsy. This is where a small piece is cut out for laboratory analysis. Unlike an FNA, this will require at least a sedation and local anaesthetic. I’ll comment later on when this might be a good idea.

When vets are concerned that the tumour could have spread, they will recommend an ultrasound of the abdomen. They will also want to FNA and possibly remove local lymph nodes.

The benefit of all these tests is that we end up knowing a lot more about the tumour before we try to treat it.

There are now four ways to treat mast cell tumours in dogs:

The choice of treatment will depend on the tumour’s location, its grade and the owner’s wishes. I’ll go through each in turn.

Whenever possible, surgical removal remains the treatment of choice. For solitary MCTs, removal is usually curative. This is possible for the vast majority of dogs. The local lymph node is also removed at the same time if there is suspicion of spread.

However, there are still two related decisions: whether to biopsy and how big the margins need to be. Margins are the rim of normal tissue we remove in order to take out microscopic tumours away from the main mass.

The size of the margins depends on the grade, or aggressiveness of the tumour. Therefore, a biopsy first is always a good idea, and especially in places where a larger margin is going to require planning or referral, such as for high-grade tumours on the legs or head.

On the other hand, for owners wishing to save the extra step, a biopsy is less important in areas where taking a good margin will be easy, like the first picture. This is especially true if the mass has been growing slowly and not causing any trouble.

There is a lot of debate about how big the margins need to be. The current consensus is called modified proportional margins where the margin is the same as the diameter of the tumour, with a minimum of 5mm, a maximum of 2cm, and one fascial plane deep.

Regardless of how successful we think the surgery was, the surgical site and local lymph nodes should always be watched afterwards. MCTs are well known to regrow even after supposedly ‘complete’ removal.

The main thing is to always get the tumour graded and the margins checked by a pathologist. This costs around $200 but is money well spent. Then if tumour is found near to the edges, or the MCT is high grade, further steps can be taken.

The decision to re-operate is a tricky one. Even with contaminated margins, low grade MCTs tend not to recur, and intermediate grade tumours only regrow around 33% of the time. I would make this decision based on how practical a second surgery will be.

High grade tumours have a strong tendency to recur, and survival is greatly enhanced by a post-operative course of vinblastine. This can also be a good idea for lower grade MCTs with incomplete removal or lymph node involvement.

There are at least three reasons why surgery can be the wrong treatment:

These are the dogs who need the next three options.

Chemo is helpful for certain dogs, but results can be disappointing. A combination of vinblastine and prednisolone +/- lomustine achieves some form of improvement in around 50% of cases. Even if suppressed, tumours will tend to regrow in time.

The use of radiation on the tumour has given improved responses, but it’s not available everywhere. Removal of the primary tumour before chemo also has some benefit even in cases where the disease has spread.

Chemo is probably most useful for tumours that have spread too widely to be able to control the individual masses any more. This is also true for the next treatment.

The first major breakthrough in MCT treatment was the development of tyrosine kinase inhibitors (TKIs). The two drugs registered for dogs are toceranib (Palladia®) and masitinib (Masivet® or Kinavet®, not available in Australia).

TKIs are much easier to administer, and can be given at home. Sadly, however, results for these drugs are not much better than chemotherapy, and often at significantly greater cost. Side effects are also generally more of a problem.

All this being said, there are many dogs for whom a TKI has allowed a significant extension in lifespan. The problem we currently have is not knowing how to predict the response before starting.

The latest development is the use of injections directly into the MCT. This is only suitable for dogs with small numbers of lumps that are easy to inject. There have been many drugs tried, but only two seem to work.

Triamcinolone is a potent cortisone drug, and may work to suppress or shrink MCTs. There is minimal evidence, but it’s inexpensive and worth a try if funds do not allow for anything else.

Tigilanol tiglate (Stelfonta®) is a new drug derived from a Queensland rainforest tree, which is ironic considering we seemed to be the last to get it. When injected into a MCT, it caused complete remission by 28 days in 73% of cases. Around half of the remaining 27% achieved remission with a second dose and only 7.5% of all the responders suffered a relapse.

Stelfonta is registered in many countries for:

This only applies to MCTs that cannot be surgically removed and have not spread.

This is a great addition. While surgical removal is still best when possible, Stelfonta can treat MCTs that up to now have required amputations or extremely disfiguring surgery. If you’re interested in Stelfonta, please also scroll down to read about its side effects.

And that’s it. I’m sorry for such a complicated story, but this is the reality of treating mast cell tumours properly. And there will still be some cases that don’t suit any of these treatments. For these, don’t panic; I have a patient right now who’s one year out from a diagnosis of untreatable MCT. He’s doing well and this could be your dog too.

However, one thing always remains the same: the earlier we see tumours, the better the chances. A small lump anywhere can usually be removed, but once they grow you’ll quickly run out of easy options.

We’re lucky to be living in an age of innovations, and so are your dogs. But we still hope you won’t need them.

Image at the start by Joel Mills, CC BY-SA 3.0, via Wikimedia Commons.

Side Effects Of Stelfonta

The major side effect of Stelfonta is the development of an open wound at least the size of the tumour, which can also be painful for a few days. In rare causes, these wounds are very big indeed. You can see pictures of some in the USA product insert.

The wounds generally heal without complications and leave minimal scarring or disfigurement. Wounds appear to be larger when the tumour has spread, so checking the local lymph node before treatment seems almost essential.

Another potential adverse effect is caused by the release of histamine from mast cells. Deaths occurred in early trials, but these seem to be prevented by pre-treatment with steroids, antihistamines and antacids. Therefore this is also essential.