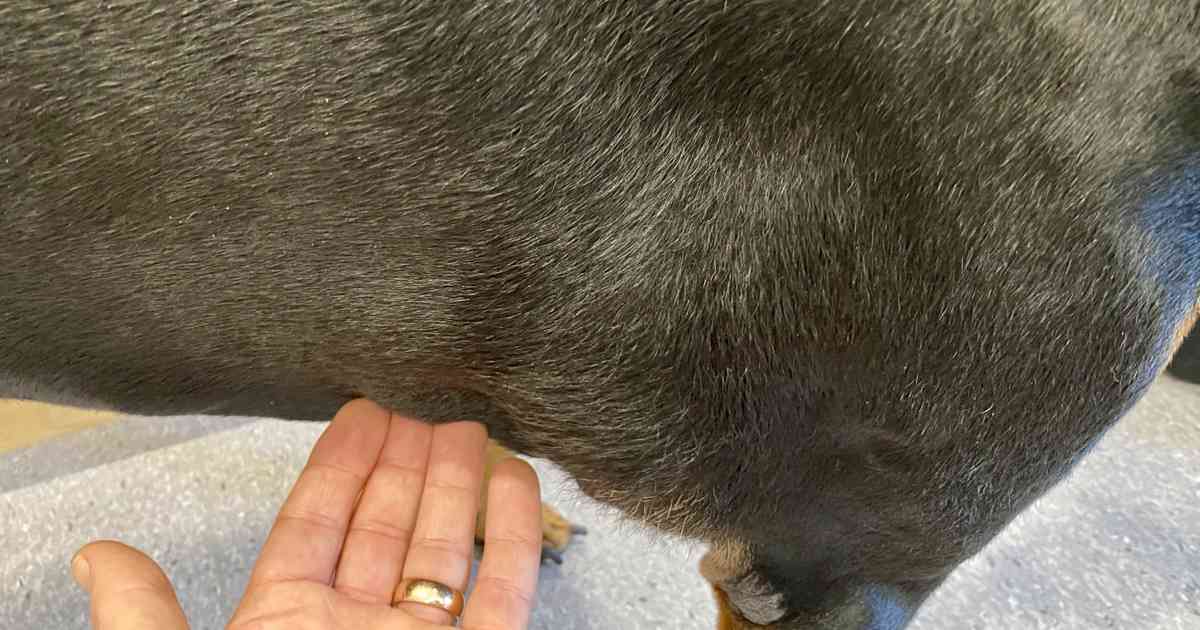 Here I will help you identify a lump found under the skin of a dog.

Tumours and masses cause a lot of concern to dog owners. However, with some basic knowledge, and the right action, there’s nothing to fear.

First though I need to clear up a common misconception.

Many lumps seem to appear suddenly. The good news for dog owners is that this is almost never really true.

But, you say, it definitely wasn’t there yesterday! What’s going on here?

A lump will creep up gradually, ‘under the radar’. Because it changes slowly, it doesn’t trigger your awareness. You’re not looking for problems, so it just hides in the contours.

Then, one of three things happens:

Now, you can’t stop seeing it. Jeepers, you can even see it across the room.

Trust me on this: definitely see a vet, but the lump could have been there six months. And you want it that way; a slow growing lump is unlikely to be cancerous. It’s the same way you don’t notice a dent or scratch on your car, and then once you see it, it drives you crazy.

Types Of Lumps Under The Skin

Most of the time, a lump under the skin of an old dog is a lipoma, or fatty tumour. However, the biggest mistake is assuming this without testing. It’s no good being right 99% of the time if the other 1% ends up with amputation or worse.

Warning: the idea that you can identify a lump by whether it’s hard or soft, or whether it moves under the skin is false. And at this stage, even the nastiest tumour won’t have any effect on health or behaviour. After this list of common lumps, I’ll show you the only way to tell them apart.

Also visit: a guide to the skin lumps of dogs.

Lipomas are benign tumours of fat tissue. They are most commonly found:

The picture above shows a large lipoma in the armpit (axilla) and my hand on a smaller one on the chest just behind. It goes to show how hard these lumps are to see.

A lipoma can appear at any age, but most often over 10 years. They grow so slowly that you certainly can’t tell they’ve grown in a month, and usually not even in 3-6 months.

Lipomas are easy to take out and almost never recur after surgery. However, not all need removal as they are painless and slow-growing. Whether we operate depends on five factors:

Occasionally, a fatty lump isn’t a lipoma, but a liposarcoma or infiltrative lipoma. These are nastier versions of fatty tumours that definitely need removal before it’s too late. You can usually get a clue by how fast they grow.

This is the lump that’s most often mistaken for a lipoma because it often feels exactly the same: soft, rubbery and round.

Fibrosarcomas are aggressive, invasive cancers that need urgent attention. Just look at the surgical margins necessary for removal and you can see why.

Speed of growth and position are the best clues. If you can tell that a soft lump is growing, think sarcoma. If it isn’t in the typical places for a lipoma, think sarcoma. However, they can occur anywhere.

Mast cell tumours are often a raised red lump, but if they grow under the skin they are almost indistinguishable from a sarcoma, and can be just as dangerous. Usually they can be diagnosed from a simple needle sample at the first visit.

Read more about mast cell tumours and their treatment here.

A build up of liquid or even solid material under the skin is called a cyst. The most common is a sebaceous cyst, caused by a blocked sebaceous gland. These can grow quickly or slowly, and often burst, releasing a thick brown paste.

You’ll find sebaceous cysts most commonly along the top of the dog from neck to tail.

A soft, painless, cool lump that appears under a surgery site is most often a seroma. This is caused by fluid collecting in the space created by the operation. Seromas can also occur over bony points like the elbow or head after injury.

Cysts rarely need treatment. Sebaceous cysts will grow slowly but normally cause few or no problems. Seromas come up quickly but should go down by themselves over a few weeks.

A special form of cyst filled with pus is called an abscess. Abscesses are well-known in cats, but when we see them in dogs there’s usually an underlying cause. Common examples are stick injury, grass seeds or other foreign bodies.

An abscess comes up quickly and is usually soft, warm, and painful. Its appearance prompts us to perform an anaesthetic and carefully explore the cavity.

Lumps in the places indicated are often caused by lymph node enlargement. If you can feel a lymph node, this is a bad sign, as that means it’s quite large.

Lymph nodes are very firm and immobile. The only common cause is lymphoma or other cancers, but sometimes a single enlarged node might be caused by infection.

If your dog is female, and has been desexed later in life, consider mammary tumours. These are firm lumps growing anywhere along the mammary chain from armpit to groin. They often feel quite irregular in shape.

Unlike people, mammary carcinoma usually spreads slowly and small lumps can be removed without radical surgery. Desexing at the time will reduce further tumour development but not stop it completely.

A firm, but vaguely defined lump around 5cm in size sometimes comes up at the site of vaccination. A typical site is on the back of the neck between the shoulder blades. It should be non-painful and follow the vaccination by less than two weeks.

Vaccine associated sarcomas have been reported at the same site but these are very rare in dogs, and usually associated with vaccines not used in Australia.

Two common lumps often get mistaken for tumours, but are in fact normal.

There’s a salivary gland in the neck behind the jaw that feels a lot like the lymph node just in front. It’s also firm and round, and roughly 2cm in a medium dog. However, it shouldn’t stick out, and the opposite one should feel exactly the same.

A hand-shaped firm mass is often found on the rump of overweight dogs. This is usually a fat pad which feels firmer than usual due to the pelvis underneath. For this to be true, there should be an identical one on each side, though one will stick out more if the dog is not standing straight.

There are many other rarer possibilities too numerous to mention, that probably together only make up an extra 1%. Pictured above is a perineal hernia, which occurs in older undesexed male dogs. Inguinal hernia, by contrast, is a bulge in the groin where the leg meets the body.

What To Do If Your Dog Has A Lump

The only way to identify a lump with certainty is with a visit to the vet.

Most vets will start with a fine needle aspiration as shown in the link. This will be able to immediately identify a lipoma or cyst.

Other tumours require further testing. Here we have three choices:

The decision we take will depend on many factors. Here are some thoughts we may have:

The single greatest influence on a successful outcome will be how quickly you choose to get a lump checked. This is especially true in places with poor skin coverage, like the head, legs and tail. No vet likes to see a lump for the first time and think, “I hope this is benign, because if it’s not…”