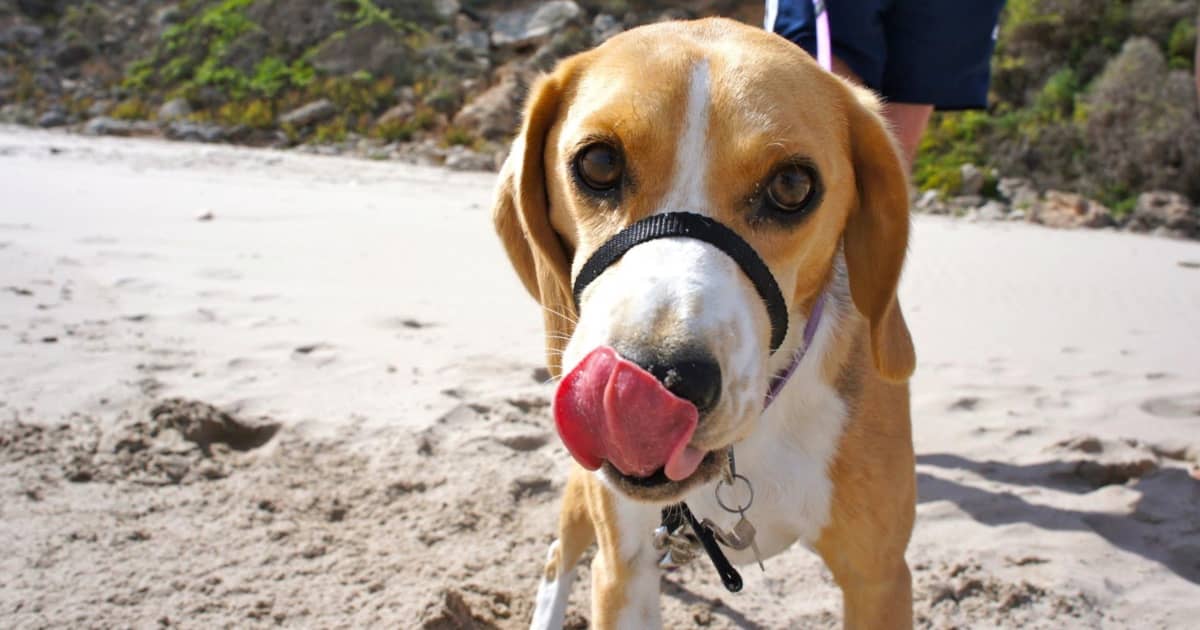 This is the story of Rowdie. She’s a survivor where many others aren’t. As you’ll see, I got lucky twice before solving the puzzle.

The food that nearly killed her is a leading brand of grain-free dog food you can buy at nearly any Australian supermarket. I wish I could tell you its name.

That’s Rowdie in the picture. She’s a 12-year old Beagle who’s always been in good health, including at a checkup early this year.

On the 16th of May, she was having a bath when she suddenly collapsed, rolled on her side and remained stiff and unresponsive for 10 to 15 seconds. She was taken to an emergency vet and had blood taken. The cause was thought to be a seizure.

I saw Rowdie a few days later. The first thing I thought was that it probably wasn’t a seizure: these go on for at least 30 seconds and have lots of muscular activity. Her history contained a further clue: she’d recently developed a moist cough.

More clues came from her examination. Her heart rate and her breathing were faster than expected, and I could feel fluid in her abdomen. Most importantly, she had a grade 3 heart murmur that wasn’t there just four months earlier.

The final clue was the bath. Seizures happen at any time, even during sleep. Rowdie’s collapse on the other hand happened at a time of increased activity.

I strongly suspected a heart problem and so we took chest xrays straight away. These showed an enlarged heart with pulmonary oedema (fluid on the lungs). Heart disease was confirmed.

You see, Rowdie’s problem wasn’t typical. She’s not of a breed prone to heart problems, and she’d been normal so recently. Most cases of heart failure don’t come on without warning because we’ve been listening to the murmur getting louder for months or years beforehand.

We started Rowdie on heart medications and booked her in for the soonest available appointment.

The ultrasound exam saved her life. That’s because the results showed she had a very unusual form of heart disease that I never would have predicted: dilated cardiomyopathy or DCM.

DCM is when the heart muscle gets thin and weak, and it normally has a very short survival time. However, not in Rowdie’s case. It was while I was talking over the results with her owner that she got her second lucky break.

I remembered those reports about grain free foods. And so I asked about Rowdie’s diet.

It turned out that earlier in the year, Rowdie’s owners had started buying a grain-free dog food. Like most people, they assumed that if it was being proudly marketed as grain free, it must be better.

Vets have known for some time that this is not true, but we can’t get the message out to dog owners. The reality is that grain free diets are being regularly linked to dogs like Rowdie.

You can read more here. We don’t know exactly why, but theories include B vitamin deficiency, inhibition of taurine or carnitine metabolism, or unidentified, potentially cardiotoxic compounds. 89% of DCM-associated diets reported to the FDA contained peas1.

I advised Rowdie’s owners to put her back onto a quality grain-based diet, and added a taurine supplement as a precaution. She also needed to stay on the heart medications. There was no way of knowing if my suspicions were correct except by trying.

Even when DCM is caused by the diet, not all affected dogs can recover. It depends how much damage is already done, and her case was severe.

I saw Rowdie two weeks later. She was doing very well, which was probably just the effect of the heart meds. A month later she was doing even better, which by now was not what we expected for regular cases of DCM.

By the way, the best way to tell is by measuring sleeping or resting respiratory rate.

On the 11th of August we repeated the echocardiogram. Here is a summary of what was found:

And here are the numbers:

The improvement was so great that it was debatable whether Rowdie needed to stay on heart medications any more. We’ve got one more ultrasound exam planned and then we’ll probably stop them.

A Warning To Dog Owners

What is critical for you, the reader, to understand here is how rarely dogs receive a cardiac ultrasound. Heart disease is one of the most common problems of dogs, but we lack the skilled sonographers to do all but a tiny fraction. I only ordered this test because there was something not quite right about Rowdie.

As nearly every case of canine heart disease has just one cause, it’s reasonable for vets to make assumptions. Especially in a user-pays system where any further investigation will add costs and delays. However, for Rowdie this would have been deadly.

There is no doubt in my mind that most cases of DCM caused by grain free diets will go undiagnosed. This would have happened to Rowdie too if she was a more ‘typical’ breed or had a more typical history. Which matters because this specific form often responds well to treatment especially if recognised early.

Without a realisation that the diet was to blame, Rowdie would have died quickly. Like the more regular cases of DCM, she would have responded briefly to the medications, but then started declining again.

These days I ask a lot more about the diet every time I hear a heart murmur. And I hope that the lesson for you is to avoid these diets until we can report which ones are faulty, and either fix or remove them.

Related: Why I can’t warn you about bad dog foods (yet)