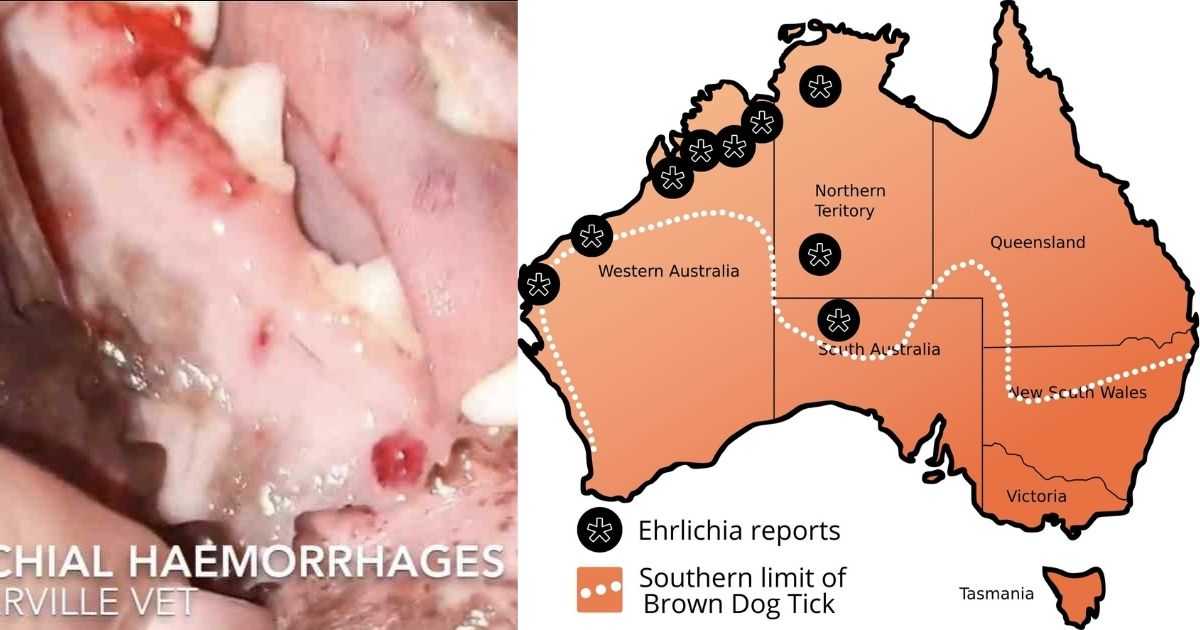 Canine ehrlichiosis is cause for considerable alarm for the millions of dog owners around the country.

The arrival of Ehrlichia in Australia has been devastating for some remote dog communities. However, there is no reason to panic, and prevention is easy.

Here I’m going to help Australian dog owners to understand the risks, and know how to easily prevent it.

Ehrlichiosis is the disease caused by a tiny bacterial blood parasite called Ehrlichia canis. It’s spread by the bite of a tick, and specifically Rhipicephalus sanguineus the Brown Dog Tick.

It causes some or all of the following signs:

Death is possible in severe cases.

The Spread Of Ehrlichia In Australia

Until recently, Australia was thought to be the only continent whose dogs were free of the disease. Then, in 2020, it was found in sick dogs in the Kimberley, and then more widely across Western Australia, the Northern Territory plus a single case in far north SA. Currently there have been in excess of 300 cases and dog numbers in some remote communities are reported to have dropped by one third.

The map shows the approximate locations of positive reports. It also shows where the tick that carries it is found. As you can see, there’s a lot of Australia where the disease could still spread.

In response, governments have instigated control programs and are preventing the movement of dogs from known areas. Currently the chance of a dog getting ehrlichiosis is still very low. However, everyone who lives in these areas or travels to them should be aware of the risk.

The risk of your dog catching ehrlichiosis is closely related to two things:

Therefore, tick control measures are very important for dogs wherever ticks are found in the Northern Territory, Western Australia and far northern South Australia. There is less concern in Queensland, but most dogs east of the dividing range will still need to take paralysis tick treatments.

If you are travelling, avoid taking your dog into known infested areas unless absolutely necessary. Once you do, keep an eye on state government regulations before leaving the area or crossing state lines as the situation is likely to change rapidly.

For example, If you plan on moving your dog into southern WA from the shires of Broome, Derby-West Kimberley, Halls Creek and Wyndham-East Kimberley, you now must:

The prevention of ehrlichiosis requires a different strategy to tick paralysis. Whereas in tick paralysis, it’s OK if a tick attaches as long as it dies quickly, in ehrlichiosis, we don’t want the tick to attach at all.

Therefore, we use surface insecticides that can act before the tick begins to feed. Currently, there are four available in Australia:

Of these, I recommend the first two, as they have been experimentally shown to prevent the transmission of Ehrlichia canis to dogs (references below). However, we don’t stop with these alone.

The cornerstones of good tick paralysis prevention are the new tablets like Simparica, NexGard and Bravecto. Their outstanding efficacy and safety means that they should be used as a second line of defence. The fact that they work better for paralysis ticks shows that once the tick attaches, these are the products of choice.

I hope you can now see that preventing ehrlichiosis is not difficult for the average dog owner. But finally, let me say one last thing: if your dog gets it, doxycycline is a simple and cheap treatment. Just so long as it’s started straight away, recovery is all-but guaranteed.

Note: the distribution map for Rhipicephalus sanguineus was constructed from the first reference, with the addition of recent reports from northern South Australia. The Ehrlichia incidence reports were compiled from state government sources (I have not included a Northern Goldfields report due to vagueness about its location).