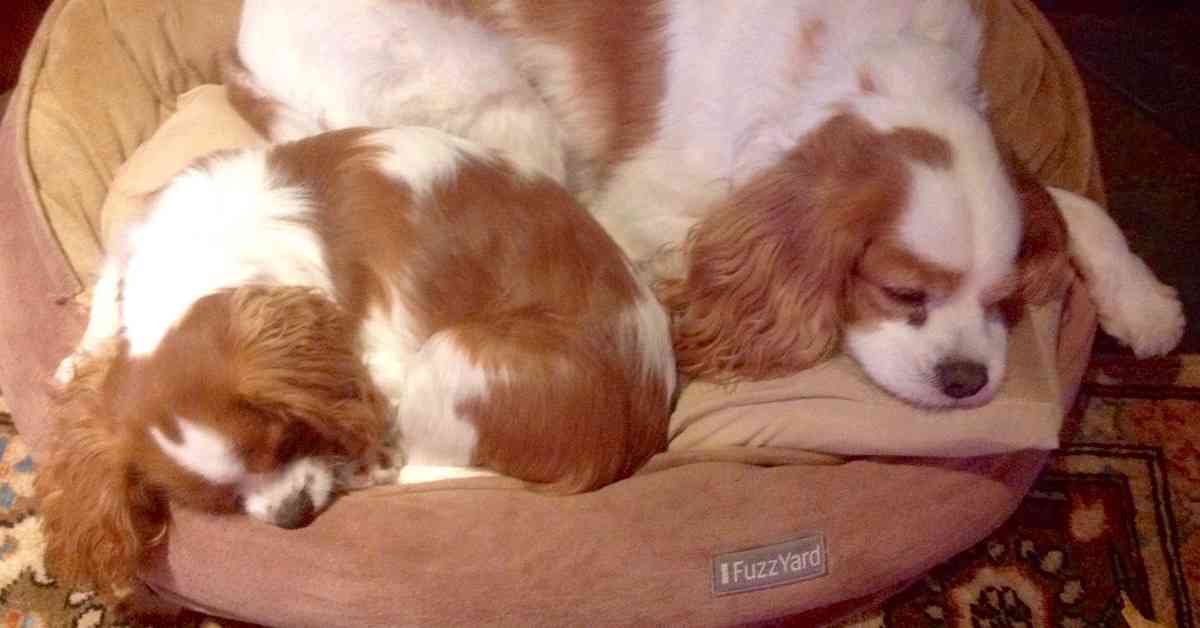 Getting a new dog is an exciting time. Whether you’re bringing up a puppy or settling in a rescued dog there’s so much to look forward to…

Amid the fun are a couple of serious issues:

A little bit of forethought and preparation can be the key.

Every time I see a second puppy, among all the normal advice on puppy raising, there’s something else I need to ask. It’s simple when you think about it but it won’t happen unless you actively do it.

Train Your Puppy To Be Independent

I see this all the time: the first dog is outgoing and confident in new situations, and can be alone without showing signs of distress. The second dog is less confident and has difficulty separating from the first dog.

Most of the time it started in the first few months of life. When dog owners have two dogs, they tend to do everything together. Why wouldn’t they? The problem is that if a puppy is with a dog 100% of the time they start to need the first dog being there.

Many of these dogs won’t investigate something until their mate has done so first.

Here’s what I did to make sure Loki could be as independent as Tinker.

The two dogs were probably still together 95% of the day but Loki learned being alone was fun too.

How do dog owners feed multiple dogs without some dogs missing out and others getting too much? It’s especially a problem with young puppies, who are easily distracted and just aren’t that interested in food yet.

The only good solutions are separation or supervision. Once again, crate training is an excellent strategy; you can leave your puppy with their food until enough is eaten. Alternatively, you can have a feeding room for your puppy. In my case I just made sure one dog was fed inside and one fed outside, and only reunited them when the food was finished.

If the slower eater is the smaller dog, it may be possible to construct a pen with a narrow entrance so that only he or she can get to the food left out.

Of course we’ve all mixed plenty of dogs and it’s generally gone well. My advice: don’t take the risk. First impressions really matter with dog introductions. If the two dogs have a bad start, they may never trust each other again.

Some dogs certainly will need no preparation. You’ll already have some idea from when friends bring their dogs over how your dog responds to newcomers. It will be a bit different this time when he or she realises this one is staying.

Here are my tips to creating a harmonious bond between an existing dog (‘old dog’) and a new arrival (‘new dog’).

You’ll probably have to change some aspects of your old dog’s lifestyle to suit having two dogs. Try to make these changes well before the new dog comes so there’s no association between the other dog and any loss of privileges.

A first meeting should not be in an area that your dog perceives to be his or her territory. Find a neutral place like a friend’s yard. If possible exercise the dogs first so they can be a bit more calm.

Think like a dog. They prefer to assess newcomers first by smell, and it’s easy to do this without confrontation.

Guaranteed, one or both will go a little crazy running around and sniffing the other dog’s odours. Ideally, keep repeating until the dogs change from this excited response into an ‘oh yeah, whatever’ attitude. Be prepared to even keep the dogs apart for a few days if you’re not sure.

Yep, sort of obvious. Use treats to reward good behaviour, or as a distraction when things get a little over the top. Make sure both dogs get some each time, starting with the older dog.

You want to be careful, so just letting them go for it with no restraint isn’t always a good idea. However, dogs on tight leashes often exhibit ‘on-leash aggression’. If using leashes, you need to be nimble on your feet so the leashes stay slack.

Alternatively, what I’ve done successfully is to use my pool fence, and put one dog on each side (the old dog on the pool side as he knows not to fall in). They can sniff and greet but can’t fully get to each other.

Just like with the odours, it’s time for the next step when the two dogs aren’t obsessively following or watching each other.

Be Aware Of Potential Flash Points

Your dog probably loves a few things, like a ball, a bone or a toy. These should be quietly ‘disappeared’ in advance of the meeting so the new dog won’t pick them up or use them.

They should only go back under supervision once the dogs are settled. Many old dogs will let their toys or bed be taken over but you need to see how things go. Sometimes, things like bones can never be left out without conflict.

Have a look at this great photo of Sam and Jesse. Sam’s been put up on the sofa to give Jesse some peace but it’s backfiring. Jesse thinks Sam is getting special privileges by being allowed on the sofa.

It’s all about making sure your old dog feels at peace and the new dog is happy. If your old dog prefers the puppy’s bed (as my Tinker does), it’s better if he or she has it. The puppy shouldn’t mind.

Here’s the brutal truth. Dogs aren’t fair and they don’t expect you to be either. It’s a human thing.

Dogs understand status and hierarchy. Subtle reinforcement of the status quo avoids a lot of anxiety or worse.

So don’t feel bad if only one dog gets access to areas, items or foods that confer status. That’s usually necessary, especially for the old dog to feel less anxious or under threat. A new puppy shouldn’t care about being lower status, but some adult newcomers may show strong motivation to control a resource.

If so, watch how your older dog responds and be flexible in deciding what to do. If both dogs value something highly enough to create problems, you’re better off getting professional advice (or removing it completely if you can).

No matter what happens, punishing either dog will make it worse. If one dog behaves badly, try to work out the cause and deal with that, not the symptom.

Some puppies are constantly trying to play, and some just won’t listen when old dogs tell them to stop. Dogs that can’t escape often learn that aggression is the only way to get rid of an annoying puppy. Other dogs can get scared or anxious when the new puppy is rampaging.

Don’t let this happen. That crate you just trained your puppy to use is not just for toilet training; it makes a great time out zone. When your old dog needs a rest, park puppy there.

Dogs are too complex to use the terms ‘dominant’ or ‘submissive’. It varies from situation to situation depending on what each dog cares most about. You’ve just got to know what things matter to your old dog and make sure nothing changes.

Here’s an example. In our house, Tinker is now called ‘Top Dog’ to remind the kids they can’t just fuss over the puppy all the time. He needs at least the same level of attention and he’s always fed first. These are his needs.

Physical contact is not his thing, though. If cuddles are on offer, he’s quite happy (even relieved) that the puppy takes the lot.

Do You Ever Give Up?

Is there ever a time when two dogs just won’t get on? Yes, I’ve seen a few but it’s very rare. If you’re worried, get help early, before habits and distrust become set in stone. There should be a solution.

Above all, be positive! I’m full of “don’t do this” and “don’t do that” but that’s just me being pedantic. The reality is that it almost always works out very well.

Have you read our guide on deciding to get a second dog?

2 Replies to “Introducing A New Puppy”