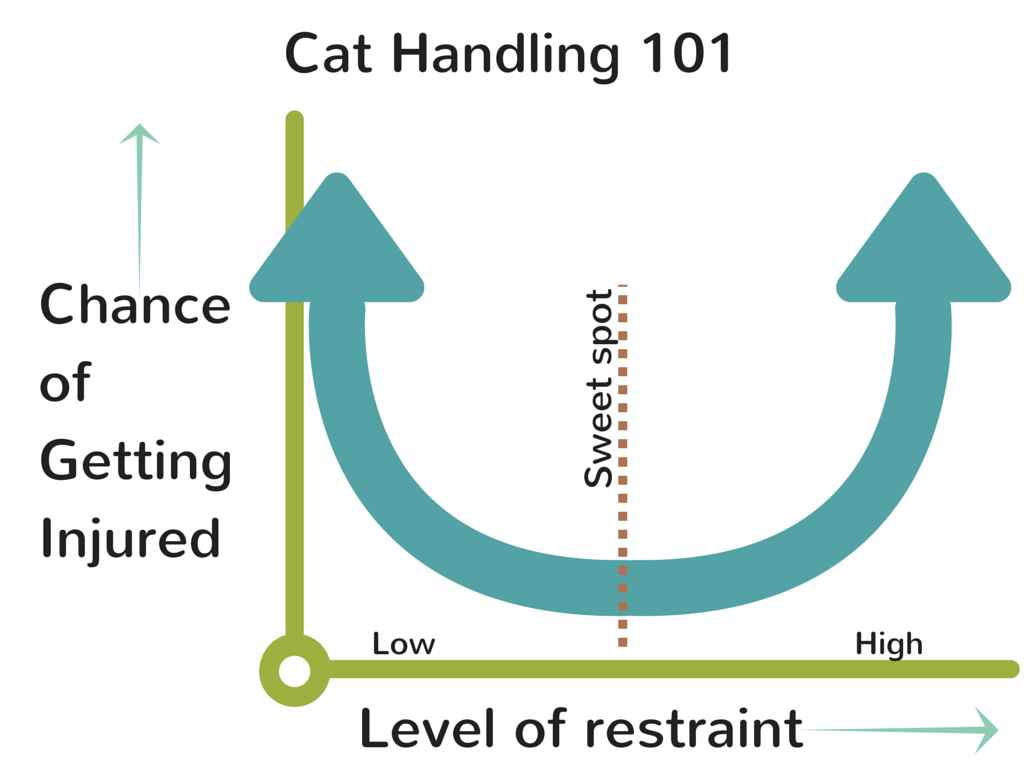 I received this lovely message the other day from some clients who moved with their cats to Europe.

I remember seeing their two cats for the first time.  I was told one of the cats was ferocious and required sedation to examine. I finished examining the easier cat, gave him his shots and put him back and said, “OK, now for the difficult patient”.

The owner says, “That was the one you just did.” There was a mix up and I had got the names muddled. It could have ended so badly.

What happened here happens all the time. The more you can put the cat at ease, the less scared they are, and therefore the less aggressive. That means fewer injuries, fewer stressed cats and fewer sedations. Because I was relaxed, Minou responded to non-confrontational handling and decided there was no need to fight back.

I’m not saying I did a good thing. I should have paid more attention, and been more careful. But I still think we would have ended up with the same good result.

Cats at the vet can be stressed, anxious, trying to avoid conflict and sometimes ready to fight if they feel it’s life or death. It’s not their fault if they get highly reactive in such an scary place.

At Walkerville Vet, we’re not claiming to be cat whisperers or feline behavioural gurus but we think we know something that is sadly not known enough. That is, when handling cats there is a sweet spot something like in the graph below.

The problem with cats is that they come armed like Iron Man, and it sometimes seems like almost anything makes them attack. When they do, they can cause severe injuries requiring hospitalisation. For many animal handling professionals, this causes a general caution and wariness, even fear, when dealing with the species.

The natural human response to this fear is to be even stronger and hold more securely. This means many people start handling a cat with maximum force. The problem is that a cat who wants to get out of your hold can always do so if they choose.

The use of extra force is like taking the nuclear weapons approach instead of diplomacy. You now have no other option than to hope it works, or you will be in a fully fledged fight with a dangerous and stressed adversary. Either cat or handler is often going to come out of it badly.

In particular, it’s the use of the scruff that gets us mad. There is a widespread myth that because a mother cat moves her kittens by holding the scruff, it’s OK to do it to an adult cat. This is just plain wrong.

Kittens have a very low body weight and large heads and necks with relatively loose skin designed for the purpose. When a cat grows up, the body size increases and the scruff becomes tighter. You could almost say there isn’t a ‘scruff’ any longer.  If you try to use this to hold a cat or worse to pick one up, you are pulling on an area not designed for trauma. It’s probably going to hurt.

Using the scruff for restraint also makes cats very mad. Why do this if you can avoid it?

I’m not saying we never hold the scruff of a cat, but if we do it’s only when we have misjudged a cat and need to stop an impending bite before we change our approach. Far better is to have assessed the cat properly, identified that they won’t cope with any handling, and chosen a gentle sedative for these patients.

So how should you hold your cat, or pick them up? Slide a hand under their front legs from either direction with your fingers under the arms. As you lift, slide your other hand under their rear legs to support their body and bring them up to your chest. If they are too unhappy to be picked up like this, we will often wrap them in a towel and pick up the bundle.

If even this isn’t possible, best take a deep breath and decide if you really want to pick them up at all. There’s probably a better and smarter way.

At the vet, don’t be embarassed if your cuddly kitty is all claws and teeth. We promise we’ll find a way to make things go smoothly. It’s especially useful if you warn the receptionist so she can put you in a quieter place away from the dogs. When with the vet, please tell us if you think there’s a better way to handle your cat to keep him or her calm.