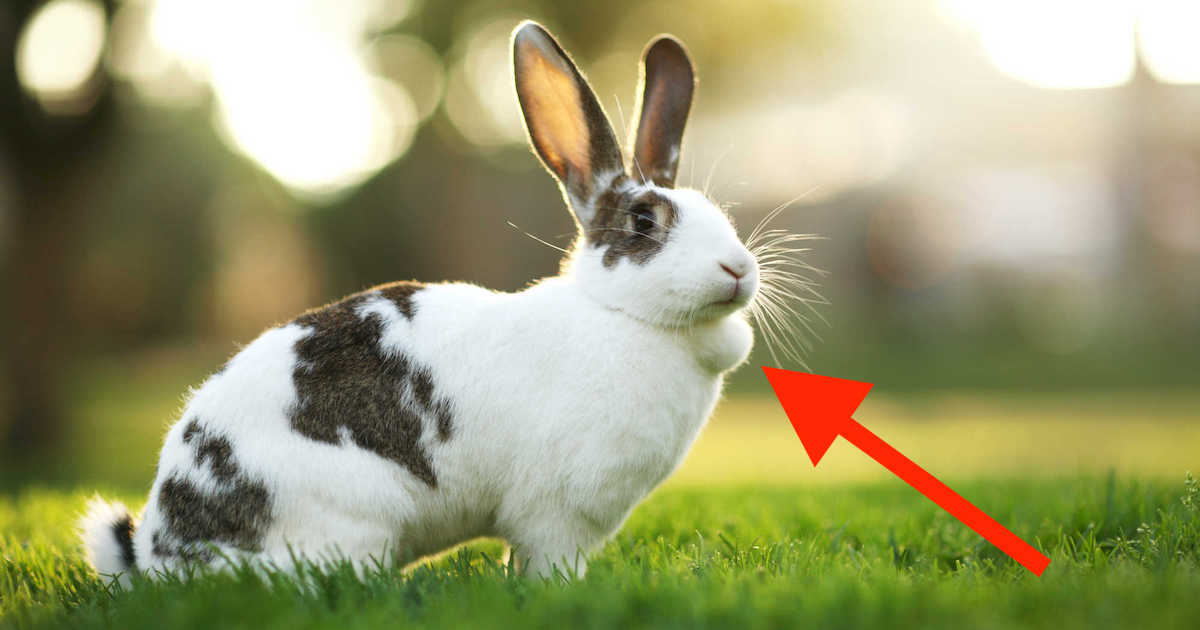 The photo above shows the typical appearance of a lump on a rabbit. Just like this one, most rabbit lumps are found on the head or neck.

There’s only one common cause, and you need to know what it is.

Rabbit Lumps On The Chin Or Cheek

A lump on a rabbit’s chin or cheek is almost always an abscess. Abscesses are collections of pus caused by an infection under the skin. They generally grow rapidly if not treated.

Unlike most species, the pus produced by rabbits is almost solid. Therefore, a rabbit abscess feels hard and round. That’s why it’s often mistaken for a tumour.

What About Rabbit Tumours?

Tumours in rabbits are a lot less common than abscesses, but they do occur. Just like in any species, growths and cancers are more common in older rabbits.

Most rabbit abscesses are found on the head and neck. Therefore, if your rabbit has a lump on the chest, abdomen or legs, it’s more likely to be a tumour. Your vet can instantly tell you which it is by performing a fine needle aspiration of the mass. Sometimes a biopsy is necessary to confirm the diagnosis and plan removal.

Nearly all rabbit abscesses are caused by bacteria such as Pasteurella normally found in the mouth and throat. These bacteria are able to spread due to other problems such as:

Once an abscess starts, it keeps growing until it is treated. The picture shows an especially large abscess on the face caused by overgrown teeth.

Unlike in other species, just lancing and draining a rabbit’s abscess is not going to be curative, and antibiotics are rarely helpful. To successfully treat these abscesses you need to be able to do two things:

Therefore, the chances of success depend on the cause of the abscess, where it is and how far it has spread. An abscess from a rabbit bite or grass seed is usually curable as long as the whole lump can be removed intact. By contrast, an abscess from dental disease or an ear infection has a very poor prognosis.

Dental disease in rabbits is a huge issue, but it mostly starts with overgrown teeth due to long-term insufficient hay in the diet. Then the impacted molars get infected. By the time an abscess appears, the infection has usually already spread to the bone in the jaw.

Similarly, ear infections causing abscesses have often also spread to the bone around the middle ear before diagnosis.

Before attempting to remove an abscess, it’s important to fully investigate the chances of success. Abscesses around the head in particular need to have good X-ray or CT studies to show the extent of dental or bone involvement. The picture shows an an abscess (arrowed) on a rabbit’s lower jaw, which could be removed because it did not affect the mandible itself.

Which, in closing, brings me to a hard but unavoidable truth. Not all rabbit abscesses can be successfully treated. It’s important to ask about the chances of success before starting.

There is no point in treating the abscess if you cannot also fix the problem that caused it. In addition, rabbit abscesses are painful, and therefore sometimes it’s better to choose humane euthanasia instead of doing nothing or making things worse with unsuccessful surgery.

However, the main message is to get to your rabbit vet as soon as possible. The chances of success get higher the earlier a lump is checked, whether it be abscess or tumour.