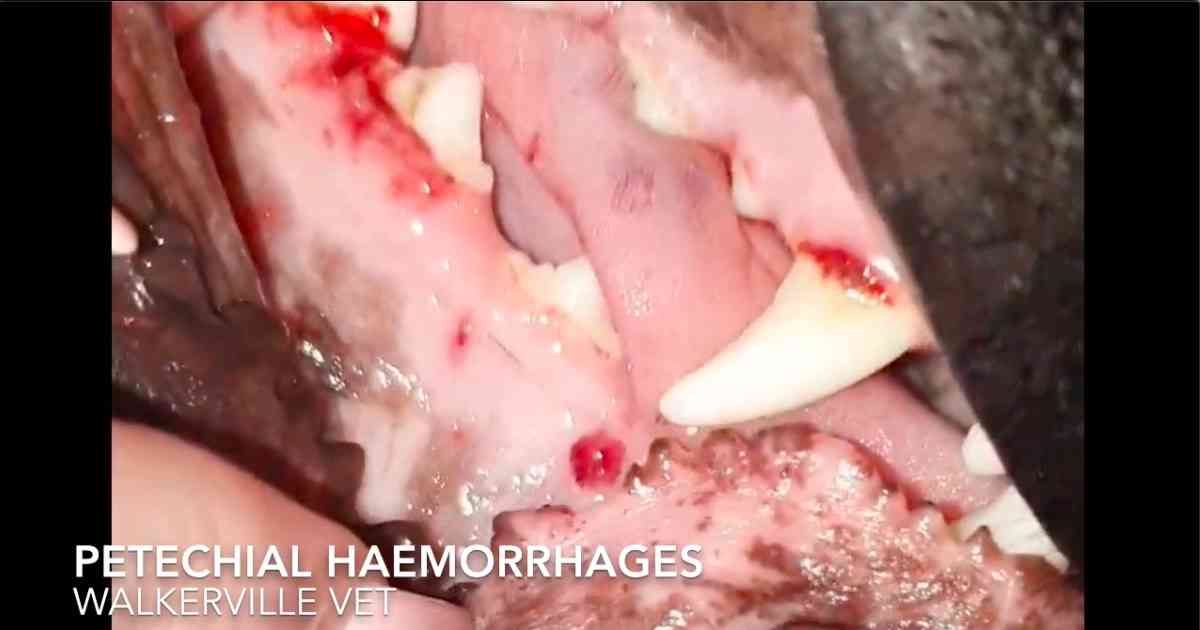 Have a look at the picture above. You could be forgiven for thinking that Barlie’s gums are just the result of a good chew on a bone. But hang on: why are there red spots a long way from the gumline and even on the tongue?

The answer is a disease you won’t easily find if you look up the causes of bleeding gums in dogs. Even though what Barlie had could have killed her.

The Causes Of Bleeding Gums

There are five reasons you might see bleeding from the mouth and gums. I’ll run through the four simple ones and get to Barlie’s last.

The correct name for gum disease and bad teeth is periodontal disease or periodontitis. It’s a destructive process that starts with plaque building up at the junction between tooth and gum.

Plaque is really just a biofilm containing bacteria so you can imagine how the immune system feels about that. The result is gingivitis, which causes the gums to bleed easily, especially when probed or brushed. Without treatment, attachment loss and pocketing lead to tooth loss.

Periodontal disease is easy to identify by the red gums, the smell and the brown buildup of mineralised plaque called tartar on the teeth. However, that’s not Barlie’s problem. Just look how clean her teeth are from chewing bones!

A cute and totally normal reason for bleeding in the mouth or gums is teething. Loss of the baby or milk teeth occurs gradually between 3 and 6 months of age, like this:

The pictured deciduous canine tooth crown was found by a puppy owner after she saw drops of blood. The missing root is totally normal: it’s been destroyed by the advancing adult canine. In a few days a new tooth will emerge from the hole.

Abnormal tissue tends to be easily damaged, not only because it sticks out but also because it’s often quite fragile. It also heals slowly. Therefore, any investigation of unexplained bleeding from the mouth should also include a thorough search for a mass.

The picture shows a small benign growth called an epulis that got knocked and started bleeding. You can read a lot more about mouth lumps in dogs here.

Anything that gets caught in the mouth (especially between the teeth) can cause bleeding. Usually it’s a small piece of bone, but I’ve also seen pieces of plastic or aluminium from chewing up containers.

It’s no big deal. We can sometimes fish them out awake, but most of the time a quick anaesthetic is on the cards.

And now to the tiger hiding in the tall grass…

The most common bleeding disorder in dogs after rodenticide poisoning is a low platelet count. However, whereas bleeding from rat bait is usually internal and hard to spot, bleeding from low platelets has a characteristic pattern.

Signs Of A Low Platelet Count

A dog with insufficient platelets will have one or all of the following:

The blood loss is key. This was the cause of Barlie’s bleeding, and she was in great danger. Yet within a few days of treatment, she already looked like a survivor.

So if your dog has bleeding in the mouth or gums, consider all the options, and consult your vet. There’s only one reason here why your dog doesn’t need to go. There’s another that needs you to go straight away.