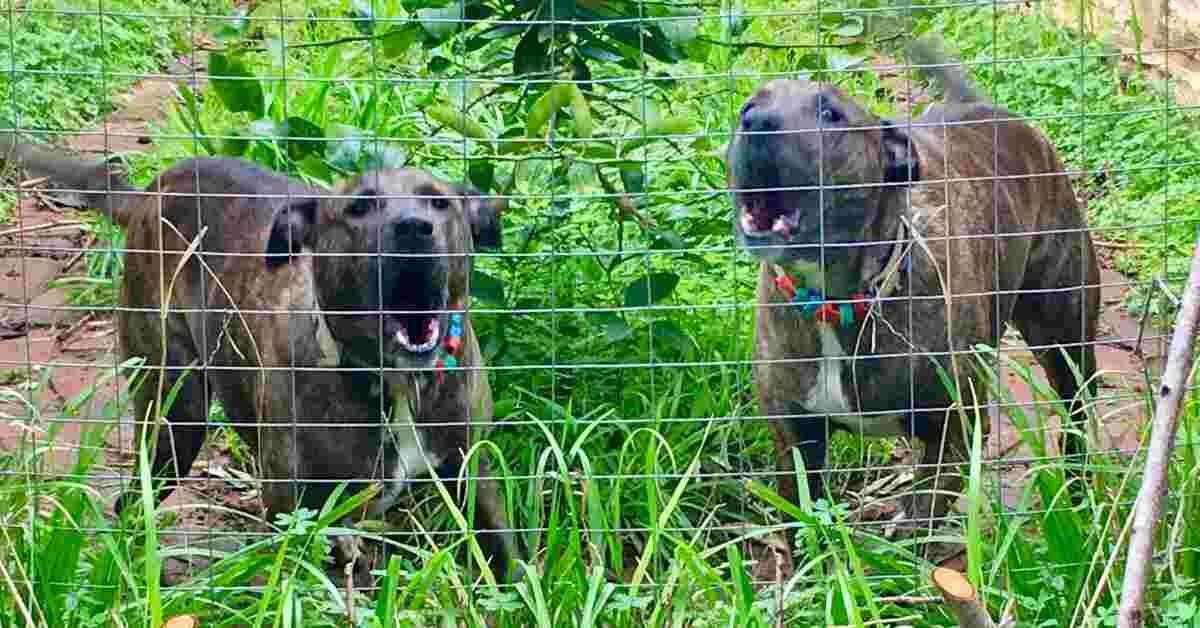 Here’s a rare public comment on a dog breeder forum about what I think is one of South Australia’s dirty little secrets.

This dog is a victim of these attitudes. When he was re-homed as an ex-breeding dog from interstate, his new owner was shocked when the breeder said he had been debarked. All his dogs were done, he said, because together they barked and he needed to be mindful of neighbours. This attitude that debarking is an acceptable and reasonable practice astounded the new owner as it does any dog lover.

And this dog is a victim. He’s not a barky dog by nature, and now he pays a heavy price in the side effects he experiences. If you pull on his collar even lightly it causes him to cough or choke like he needs to clear his throat. Here’s something else they notice that I wouldn’t have considered:

This is our first experience with a debarked dog. The biggest difference I have noticed is he is quiet. Other people often remark on how quiet he is (not knowing why). He doesn’t make all the various noises I took for granted with our other dogs, but I now realise they were important auditory cues as to behaviour – there’s much more vocal communication by dogs than barking. So I need to remind myself that we don’t have those markers. He won’t whine or yelp if in trouble. He can’t. I need to actively watch him to pick up cues. I have learned to better understand the visual signs of how he is responding to an environment, if he is getting stressed, defensive, being overwhelmed by another dog or person, too excited etc, to know when to intervene to support or reassure him.

Have you even heard of debarking? Most dog owners haven’t.

Debarking (also called devocalisation) is surgical damage to the vocal cords designed to reduce a dog’s ability to bark or the bark volume. There’s not much finesse involved.

Well-meaning dog owners often get told it’s a good solution to barking problems. I have never seen a debarked pet dog whose owners did not regret having it done. Debarked dogs still bark; they just produce a lower volume hoarse noise that doesn’t carry as far. Common complaints include:

Thankfully, pet owners very rarely need to resort to debarking, as there are many other good ways to reduce barking in dogs.

Is It Illegal To Debark A Dog?

Debarking for noise reduction purposes is considered a mutilation and is illegal in the United Kingdom. Amazingly, it’s allowed here. The intention is that it is used as a last resort when there’s no other alternative than euthanasia.

I’m going to show you why that isn’t working. I’m going to compare our laws with the laws in NSW and Victoria. Then stay with me and I’ll explain why it matters.

Owners of dogs who are debarked in NSW or Victoria must show an official council order identifying the dog as a nuisance barker, and sign a statutory declaration. Victoria goes further in requiring the vet to notify the Bureau of Animal Welfare within seven days of each procedure.

South Australia’s rules are excerpted below:

“However, a person who is a veterinary surgeon may—
(a) surgically reduce the ability of an animal to produce a vocal sound if satisfied
that-
(i) the procedure is required for therapeutic purposes; or
(ii) there is no other reasonably practicable means of preventing the
animal from causing a nuisance by creating noise”

The “if satisfied” means the owner providing a statutory declaration saying they’ve ‘tried everything’. That’s it. No checking, no data collection, no outside involvement at all. Now you can see why people hop the border. Embarrassing isn’t it?

How Often Is Debarking Being Done?

I don’t want to sound alarmist but I think South Australia has a real problem with ‘convenience’ debarking.

I’ve been a vet long enough to hear the stories of dog breeders who routinely debark all their dogs (typically 10-20 at any time). These dogs are debarked because they think the alternatives are too hard.

These breeders don’t represent the vast majority of good, ethical breeders like the ones that bred my two dogs. There’s no way of being certain who or how many they are as numbers aren’t being collected. It’s all too easy to get done.

Yes, I understand the problems with properly looking after large numbers of dogs, but most people’s attitude would be: if you can’t breed dogs without debarking them, you shouldn’t be breeding dogs. These dogs are probably barking from frustration, boredom and overcrowding. Deal with it properly or get out of the game. Dog boarding facilities do just fine without needing to debark every dog that comes in.

Prevention is most important, but if these simple ideas for reducing barking don’t help, there are excellent behaviour consultants and specialist veterinary behaviourists who would love to help. They probably cost less than debarking too!

“I am unaware of any client who has sought my help resorting to de-barking.”
Dr Robert Holmes BVM&S PhD FANZCVS MRCVS

Registered Veterinary Specialist in Animal Behaviour, Dr Kersti Seksel has only needed to recommend the procedure for one special case in a long and successful career managing barking problems. This dog was essential for the mental health of a severely disabled man who couldn’t follow any treatment recommendations.

What about the argument that debarking saves dogs from euthanasia? Yes, it may, but these dogs would be saved under the Victorian or NSW rules just as effectively. What’s more, actual cases of barking causing euthanasia are extremely rare. I have never knowingly seen such a case, and of dogs left at the Animal Welfare League, barking problems make up only 0.67%, or two dogs in every 300 surrendered! And even these dogs aren’t euthanased!

What Can We Do?

You can be sure that when SA’s Animal Welfare Act 1985 is next up for review, we’ll be pushing to bring it into line with the other states.

In the meantime, the best we can do is apply moral and financial pressure. If somene you know is considering devocalising their dog, get them to ask us for a referral to a veterinary behaviourist. When you visit a breeder, or see them at the Royal Adelaide Show, listen to the barking. If it sounds like the dogs in the video below, ask the breeder if the dogs have been debarked. If you don’t get a satisfactory answer, have nothing to do with them.

Not only is this breeder covering up poor dog husbandry, their low ethical standards are likely to show up in other areas like the health of their puppies.

To finish, have a look at this USA vet’s video on debarking and give it a big thumbs up.

By the way, if you’re surprised at the strong language in the page title, it’s to appear on a Google search results page if someone is looking into debarking.