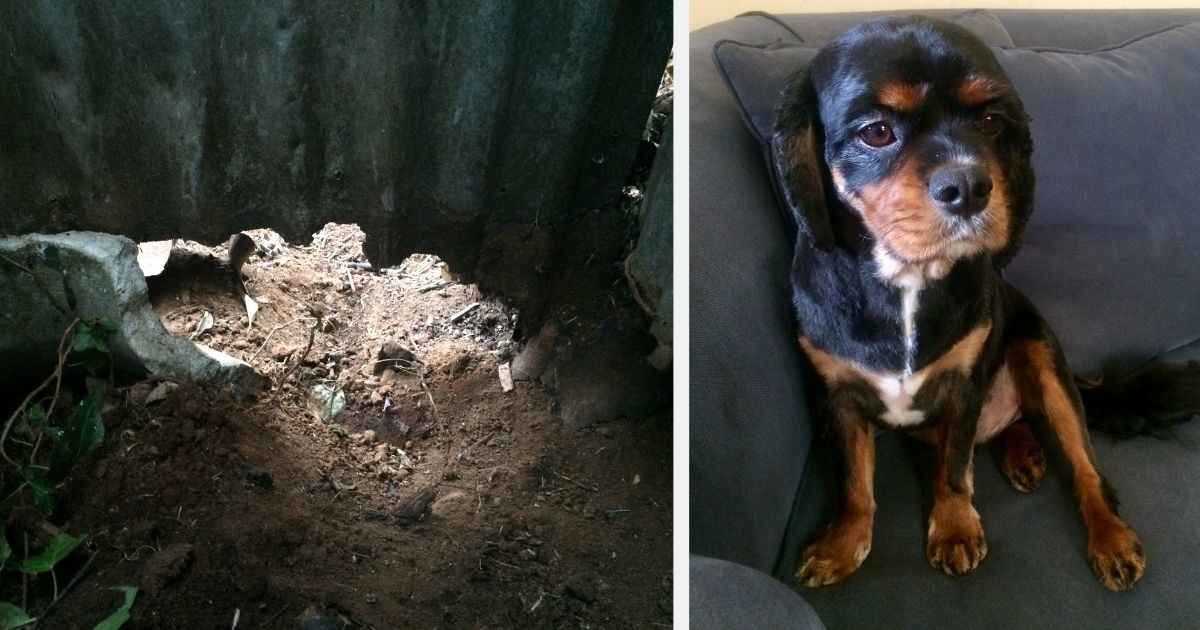 Last week Fred was found after being missing for 18 months. Without any doubt he’s very lucky ever to see his home and family again. He was stolen right here in suburban Adelaide by people who never wanted him to be found.

How can dog theft still happen in 2019, almost a year after microchips and seller registration became compulsory? The answer is something all dog owners should know. It may even help you get your dog back if they go missing.

The pictures above tell the story. That’s Fred on the right before his theft, a young, fit Cavalier King Charles Spaniel. On the left is what he managed to do to the fence while his owners were out. You can see he’s pushed away the bricks and dug underneath.

Most young dogs have got on the street at least once. Both my dogs have done it. Normally what happens next is that someone picks them up and takes them to the nearest vet. There, we scan the microchip and call the owners to come and get them.

When Fred got out, the phone never rang. He just disappeared. Then, last week, an overweight, matted dog was found wandering at Sefton Park. He was taken to the vet and scanned: it was Fred, but a very different Fred.

One look at Fred and you can see the neglect:

I really do mean terrible. His left ear had an infection that had been there for a very long time. Long enough to burst the eardrum, invade the middle ear and establish itself.

Ear infections matter because they are very, very painful. You can read about another case of neglect of an ear infection that ended up in court. Fred was just as bad.

How We Treat Ear Infections

Normally I’m all positive about treating a dog’s ear infection. I haven’t failed any yet, at least none who have come back for the weekly re-checks. We will typically examine the ear, take a swab, and treat with whichever ointment the swab suggests. Bad cases need a flush out under anaesthetic first.

Then we take another look in a week to make sure it’s fixed.

However, this is for recent ear infections with intact eardrums. What about Fred’s infection? It was probably there for over a year and by now it’s well and truly established.

For Fred, we booked him in to have the pus in his ear flushed out with saline, and took a swab to send to the lab. The swab will tell us what the infection is caused by, and which antibiotics can kill it. Then we treat and cross our fingers…

What we’re waiting for is to see if his eardrum will heal. A freshly ruptured eardrum can repair itself, but I’m worried about Fred. I’ve already warned his owner it’s 50:50 that he’ll need what’s called a Total Ear Canal Ablation and Lateral Bulla Osteotomy. That’s essentially the surgical removal of as much of the ear as we can.

What happened to Fred I’ve seen happen to a number of dogs over the years. I call if dognapping, though it isn’t really, as no ransom is involved. I’ve seen both sides: the bereft owners and the dognappers.

The dognappers find a dog wandering the street. Instead of the normal reaction, here’s what they say:

“What a poor lost dog. He must be neglected to be wandering the streets. We’d better rescue him.”

And so the dog disappears, unseen and untouched by those that could get him back home. The people that took him continue to tell themselves what a good thing they did, but at least subconsciously they know they did something wrong.

How do I know this? Two things give them away.

I tell them: “what if there’s a child out there missing him and not knowing why he was lost”. Even then they try to refuse.

I can only try to stay calm in the face of such selfishness. I know what they did was just a moment of weakness, but it’s no excuse.

What To Do If Your Dog Goes Missing

If your dog is lost, you normally just have to wait for the phone to ring. However, for a checklist of what to do and who to contact, click here.

This won’t save you from the dognappers, so I have one further trick. If a week has gone by and there’s no sign, here’s what I would do:

If someone just took him off the street, it’s unlikely that he’s outside of a kilometre radius. Knowing how common dognapping is, I’d assume that’s what happened and I wouldn’t give up.

You could also add a local flyer with a reward so someone dobs them in. Yes, that’s a lot of effort, but it’s worth it and I’ve seen it work.

Fred’s return was quite different. Have you already guessed how he got back home? He did his escaping trick again!

We’re watching the lost and found to see if anyone reports him missing, but they probably aren’t that stupid. If you think you might know something, contact us privately.

Thanks to AdelaideVet Prospect for looking after him when he was found, and the courier who picked him up.

One Reply to “How Microchipped Dogs Can Still Be Stolen”