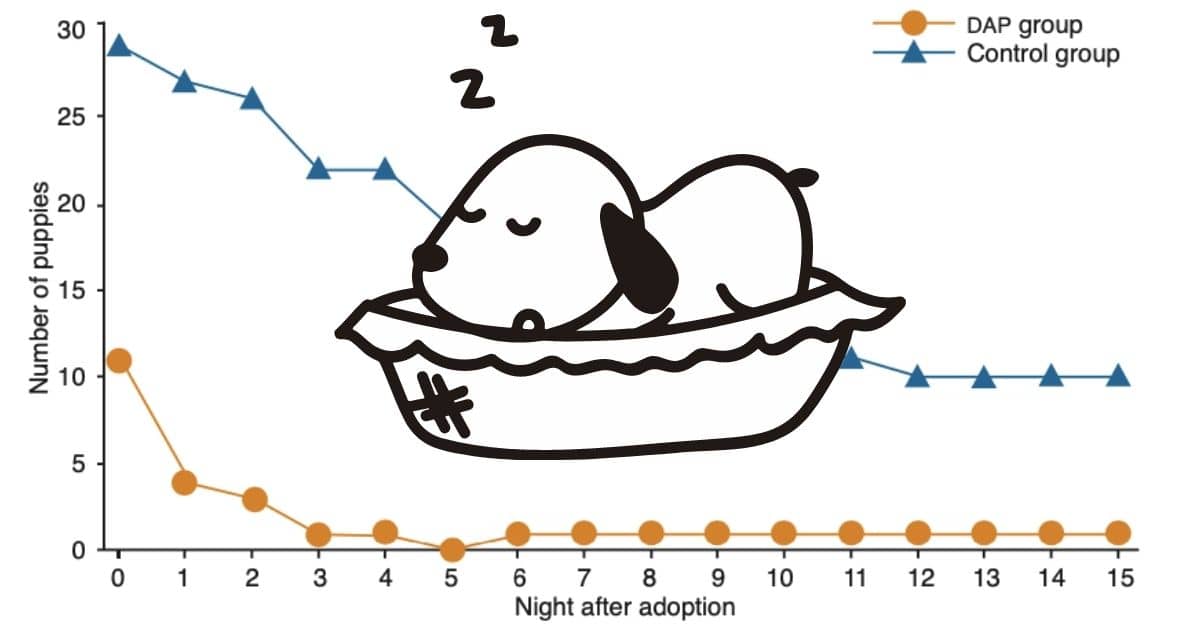 This article is for settling in a puppy in the first few days after adoption. If your puppy is crying at night during these early nights, most of the advice you find online is not just unhelpful, it might even be harmful.

So let’s start with a few myths that need busting.

How NOT To Settle A New Puppy

So let’s stick to what works. It starts with understanding the problem.

Why Puppies Cry At Night

New puppies are unsettled overnight due to their sudden and forced change from a natural to an unnatural environment. Puppies are never alone in nature unless something is wrong, and your new pup understands this innately.

Their distress is caused by separation from not just their mother, but also the other pups and the nestbox they were raised in. Importantly, this perception is mediated mostly through smell, although sight and sound also play a role.

To help new puppies cope, we need to keep this in mind, but also be realistic about how much we can improve them in the first few days.

How To Settle Pups & Stop Crying

I’ve been advising new puppy owners every day for nearly 30 years and they always come good if you do it right. Here are my tips:

Don’t try to get it right on day one. Taking a puppy directly from the breeder into isolation is setting yourself up for failure. The first night should be either in your bedroom or you should sleep out where your puppy will be.

Letting a puppy sleep on your bed exposes them to the danger of being crushed. I would set up a bed on your floor within easy reach so you can console them as needed. Prepare for an unsettled night.

Why Can’t Puppies Sleep In Your Bedroom For Ever?

Humans are unreliable, and we need pups to learn this harsh fact early. Most people who work with dogs agree that puppies who become accustomed to sleeping with owners have more trouble separating later.

Co-sleeping would be fine if we could guarantee to our pups that we’ll never leave them. But we’ll go to work, go on holidays, even go into hospital at times. If you set them up at this sensitive age to expect you to always be there, that expectation may stay for life.

We’re only going through this pain so you have a happier dog later. Like with every new puppy experience, the earlier you make the changes, the easier it will be.

Start by imagining what they’ve left behind and try to recreate it as best you can. Create a warm, quiet den in a small room, a corner or under a table wherever they will feel most secure. Try putting soft toys or puppy-sized filled socks in the bed, possibly a warmer, and avoid noises and draughts.

Music probably isn’t much good, but a human voice may be soothing, perhaps an audiobook read by a calm, even voice. A familiar smell is best and although one of your unwashed T-shirts might be OK, a piece of blanket from the breeder is ideal.

Using A Crate At Night

A quick word on the bed, too. The most success is had with a pen that is large enough to enclose a comfy bed and a toilet area. This is not crate training, where toileting is excluded, as it’s too early for that. We’re just trying to contain them to one area so the toilet training isn’t lost overnight.

You can also set up a small room or create a pen out of furniture. The important thing is to cover any parts of the floor outside the bed with something you want them to toilet on.

Should You Leave A Puppy To Cry?

The second nights and on are best with the pup in their new bed. They will cry and you will face the terrible dilemma of whether to go in or not. However, no matter what you do, it’s going to be bad.

Go in every few hours to clean up and check on your pup, but don’t make a fuss. Just be calm, keep the lights low, and expect the crying to start again as soon as you leave.

How Long Does It Take A PupTo Settle?

Usually, the first separated night is completely unsettled. You may hear crying all night, on and off. Because your puppy is awake, they will wee and poo frequently, and then tread it everywhere. You’ll really doubt yourself.

The second night should already be better. Most pups will cry for around half the time. By the third night it should be just a few hours, and an average pup is quiet for the fourth.

Once they are settled, you will actually need to go in at least once overnight to take them out to toilet! This is when you can swap the pen for a bed-sized crate.

An Alternative: The Walking Bed

If crying will be a problem for housemates or neighbours, or if it isn’t for you either, here is a slower alternative. Start with the pen in your room. They should settle faster this way.

Once they are OK, start moving it each day, maybe only by 30cm (1 foot) each time. The pen is going to walk itself out the door of your room so slowly that your pup will barely notice.

At least that’s the theory, but it mostly works. The end result is the same: a pup that can sleep separately without being distressed.

When we talk about the evidence-based ways to settle new pups, there are two clear answers. The first is other animals. Pups who sleep with another animal settle better on average.

Look at this graph. This study measured how often owners stopped trying and let their pups in to the bedroom. Forget DAP, which I’ll mention in a minute and focus on the orange squares and blue triangles.

These are puppies that slept with another animal, typically a dog. Note how rarely they failed compared with the solitary pups.

There is a catch, though. The pups will become dependent on the other animal, the same way they would on you. You can counteract this by separating them when possible during the day, even for short periods.

The second evidence-based way to stop puppies crying is DAP, or dog appeasing pheromone. This scent is released by nursing mothers and so it is logical that replacing it might help (DAP is also promoted for inappropriate reasons in my opinion, but that’s another story).

Now look at the next graph. It shows a comparison of how often owners were woken up on successive nights between pups wearing DAP collars and those with placebo collars.

If this evidence is to be believed, this is the most significant single intervention you can make to settle a new puppy.

The study does have two problems: the subjects were pet shop puppies, which are associated with higher levels of anxiety, and the study was run by the company itself. However, the size of the effect is so great that even with these concerns, I am certain that the results are valid.

A second study backs up these findings by observing improvement after DAP in gundog breeds such as Labradors, Golden retrievers, Spaniels and Weimaraners.

I recommend an Adaptil Junior Puppy Collar for every new pup, and especially those bought from pet shops or similarly unsettled places. The best time to fit it is prior to adoption, but later should still help.

Here is a very similar graph from the same study showing how many pups caused disturbances such as whining, howling, or scratching at the door. Once again, it appears to show a striking effect of DAP, but this time, I want you to look at something else.

By Day 5, the DAP pups have settled, and then one un-settles. Read what the researchers said about this:

However, one puppy relapsed on night 6, after three quiet nights, after an excessively punitive confrontation with its owners over house training; this puppy continued to wake them up by whining…

This is my final message: no matter how tired you are, no matter how frustrated or angry, you must hold it together and stay calm. You will do lasting damage otherwise, and nobody wins.

But let’s not be negative, as failures like these are rare. I see new successes every day and I hope I’ve helped you become another one!

Taylor, K., & Mills, D. S. (2007). A placebo-controlled study to investigate the effect of Dog Appeasing Pheromone and other environmental and management factors on the reports of disturbance and house soiling during the night in recently adopted puppies (Canis familiaris). Applied Animal Behaviour Science, 105(4), 358-368