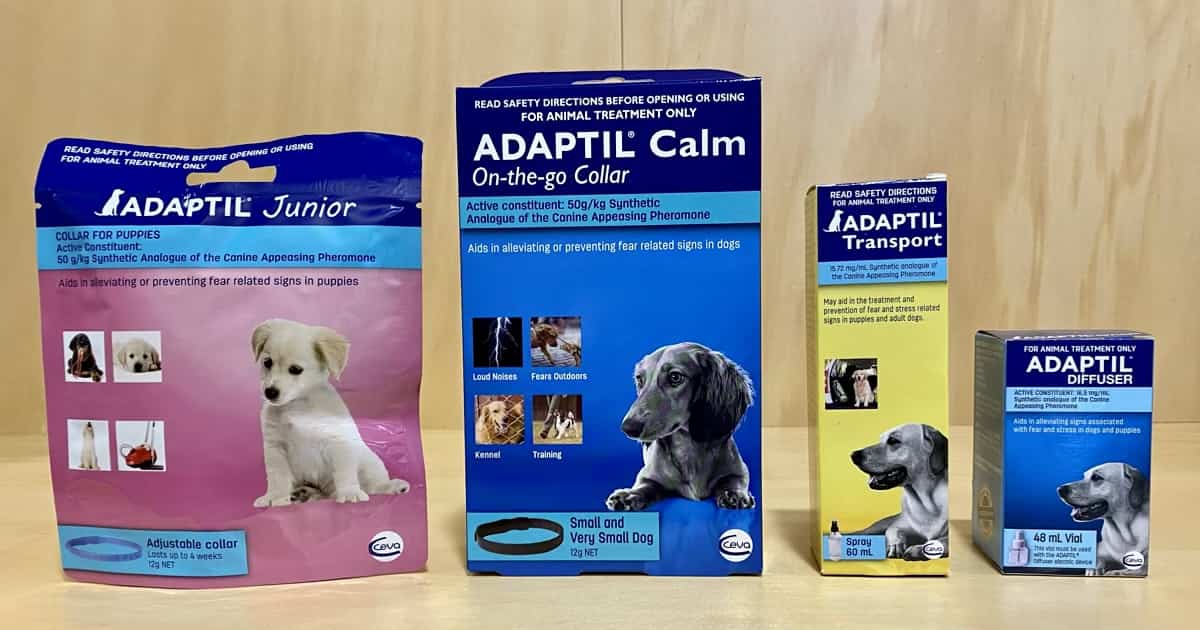 Try any online search about canine anxiety and you will quickly come across Dog Appeasing Pheromone. Whether as DAP or by its brand name Adaptil®, you find many recommendations, quite a few articles and of course a lot of ads.

It sounds too good to be true. Can a harmless treatment undetectable to you or I really work to ease anxiety?

The answer is, of course, that it depends. You certainly aren’t going to get it out of the box and suddenly everything is OK. How well it works for your dog will mainly depend on:

What Is Dog Appeasing Pheromone?

DAP is one of the rare mammalian pheromones, and is released by nursing females during the first few weeks of the puppies’ lives. It seems to act to encourage relaxed behaviour in the nest.

DAP is sold as Adaptil in three forms:

Problems With The Evidence

I’ll present the evidence under headings for each condition or problem. While there are some excellent studies among the 20 available, there are also two large problems:

Of course, just because a career or a study depends on the whims of a pharmaceutical company doesn’t mean the science will be bad. It just introduces a risk of bias. This will come up especially when I talk about puppies later.

One thing companies definitely do not do often is publish studies that don’t give the desired outcome. This is a subtle form of bias because if we remove studies that say something doesn’t work, it can make uncertain efficacy seem certain.

The lack of placebo control is a bigger problem. I will just say that any behavioural study without a placebo group is very likely to find that the drug works, whether it does or not. You can read why here.

For this reason, I have discarded 8 studies (listed below) that all found benefit without comparison to placebo. These are often the same studies being quoted at you to say Adaptil works. You might be surprised by what’s left.

There is no high quality evidence that Adaptil works for separation anxiety in dogs. The one good study13 found that a DAP diffuser did not improve behaviours such as barking, scratching, whining, howling, trembling, nor heart rate, eye or ear temperature of dogs.

Normal dogs were separated from their owners in a laboratory setting and observed for signs of anxiety.

My view: the results could have been different if dogs who suffer from separation anxiety were used instead. However, separation anxiety is usually severe by the time a vet is consulted, so I am not surprised that a mild treatment like DAP had no measurable effect. Of course, it is harmless to try as long as it’s not used instead of a more effective remedy.

One study11 on dogs in a shelter provides indirect evidence that Adaptil can reduce the intensity of barking. Dogs exposed to a person walking by or a friendly person barked less often and the average loudness was reduced compared with placebo. Peak loudness was unchanged.

My view: although the study has some statistical problems2, it seems likely that the effect is real. Just a warning though: barking is a complex problem, and Adaptil would probably only help in those dogs where it is caused by anxiety.

There is only minimal evidence that Adaptil helps dogs with sound‐induced fear and anxiety. Two very problematic studies (discarded5,8) are often quoted but neither are placebo-controlled, and both use other treatments simultaneously.

One better study uses normal dogs and exposed them to thunder sounds at 83.9 dB (thunder itself can be up to 130dB). They found that a DAP collar reduced global measures of anxiety and active signs of anxiety and increased the use of a den. However, have a look at their experimental schedule.

My view: as all of the placebo dogs and then all of the treatment dogs were assessed together, I would not be surprised if the researchers were able to tell which dogs were being treated with DAP and which were not. This is called a detection bias. I will say that intentions were good, and the researchers are well-respected in the field.

I also suspect that if dogs who suffer from noise phobias were used (which for welfare reasons is impossible) and the noise intensity matched that of thunder, the effect would have disappeared. Read here about treatments for dogs scared by firework and thunder.

Adaptil For Puppies Crying At Night

Two studies have found positive effects of Adaptil collars on recently adopted puppies. The first12 fitted collars to purebred puppies and found a benefit only in Gundogs (mainly Labrador retrievers, Weimeraners and Spaniels). Those receiving Adaptil cried for a median of three nights versus nine for the gundogs in the placebo group.

The second study3 pre-fitted Adaptil collars to puppies prior to sale from pet shops. A striking effect was observed where all 32 treated puppies settled within three days. Two thirds of the 34 puppies receiving placebo were either still disturbing their owners in two weeks or only stopped when being allowed into the owner’s bedroom or to sleep with another dog.

The same authors published a later study of the same puppies4 showing fewer signs of avoidance and uneasiness when facing unfamiliar people and new environments, although the effect was not as striking.

You can view these studies in more detail in our guide to helping puppies sleep overnight.

My view: There is a potential conflict of interest in the two pet shop studies because “the owner of the company that produces the commercially available canine and feline pheromones was a coauthor”2. I certainly think this is worth considering, but the study design appears sound, and I find the results hard to ignore.

The purebred study is in partial agreement. The reason for the smaller effect may be that pet shop puppies are known to experience higher levels of anxiety. They suggest this could be due to the increased number of translocations, the lack of a home environment, and the average of 2-3 weeks spent in the shop.

Summary: based on these results, I recommend Adaptil collars for all pet shop puppies, Gundog breeds and any that do not settle quickly.

One study fitted Adaptil collars to puppies attending puppy preschool classes. At various points during the classes, treated puppies showed lower fear, lower excitability and higher learning. In addition, dogs in the DAP groups had a higher degree of socialisation at followup phone calls, compared with dogs in the placebo group.

My view: effects were not so great that collars should be considered essential in classes. However, for fearful, excitable or anxious puppies they are highly recommended.

There is no high quality evidence that DAP assists dogs who are anxious about car travel. As always, there’s no harm in trying but you might want to consider some of these options too.

Lastly, two other specialist uses are worth mentioning. Adaptil diffusers have been shown to increase the quality of mothering behaviour in breeding dogs with young puppies8,9. Adaptil as a diffuser5.7 or spray10 was also associated with reduced signs of anxiety in hospitalised dogs.

It might seem harsh to have excluded so many studies in this review of Adaptil. However, in such an important welfare issue we have to apply the evidence rigourously. I see far too many dogs in which Adaptil has been tried for wildly inappropriate reasons, and for far too long when much better treatments are available.

The company that own Adaptil are sitting on a gold mine, and in my view if real therapeutic benefits existed for the questionable problems, the research would have come out by now. And if it hasn’t, well it’s time. It’s a great treatment as long as we stick to its strengths and stay realistic about what it is unlikely to do well, at least on its own.

Next week: Feline Pheromones in the spotlight

3 Replies to “A Review Of Adaptil For Anxious Dogs”