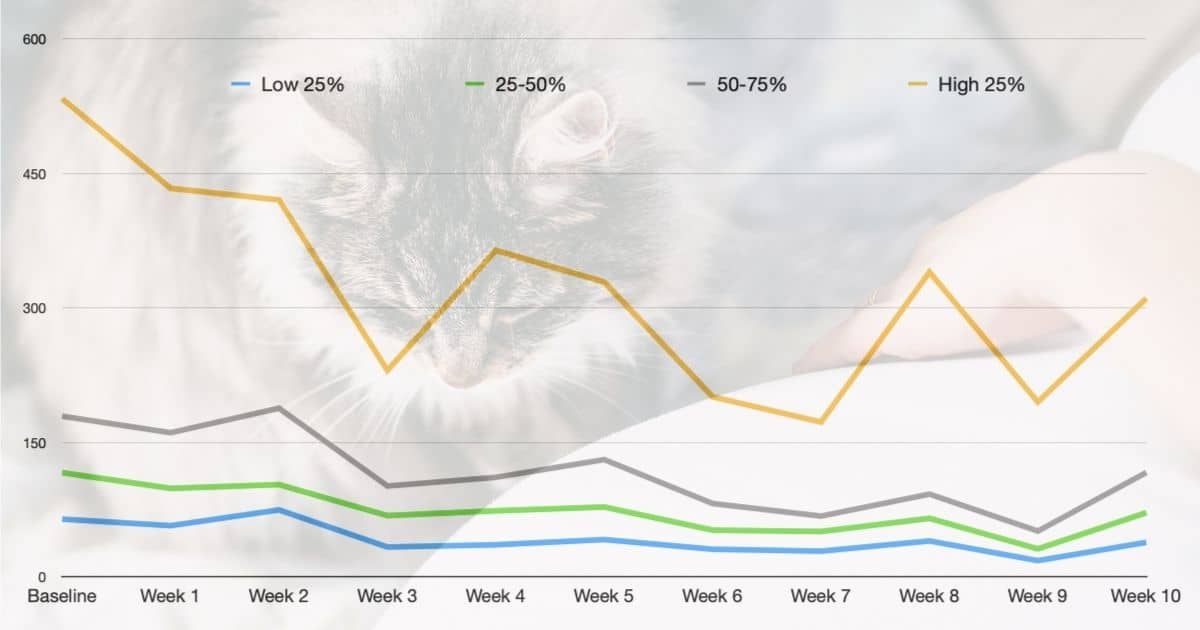 If you have an allergy to cats, or know someone who does, then you know how debilitating it can be. Cat allergens are everywhere, and up to now there’s been precious little you could do except avoid cats altogether. Which for many people has not been possible.

So it was with great hope that here in Australia we awaited the arrival of Purina’s new food designed to reduce human allergies to cats and kittens. Imagine the possible benefits if it works:

But could it also be too good to be true? If it encourages people who can’t keep cats to get them, surely this will be a backwards step instead. I found my first Devon Rex in an animal shelter where she’d been dumped for just this reason.

I’m going to take you through the science behind Purina LiveClear® as impartially as I can. By the end, you’ll have a good idea of what to expect if you try it.

It starts with the major cat allergen of humans: Fel d 1. This complex protein is found in the saliva, sebaceous glands, skin and fur of cats. It’s very stable, and can easily become airborne, from where it causes all the usual signs of allergy in people: sneezing, runny eyes, asthma etc

Cats probably spread most of the Fel d 1 around by licking their coat. So the people at Purina thought: what if we developed a food that blocks the Fel d 1 from the saliva?

They expose chickens to cat allergens and collect their eggs. These then contain high levels of anti-Fel d 1 antibody. The egg proteins are sprayed onto cat biscuits so that cats end up having antibodies to their own allergen in their saliva. Theoretically then, when they groom themselves, the Fel d 1 is taken out and inactivated.

As an aside, it’s worth noting that in the trials the food was fed continuously, which makes sense when you see how it works. However, as any vet knows, it can be hard to do this without having a fat cat.

According to Purina’s own research, cats who eat LiveClear have a 47% reduction in allergen on their coat. And this is true, if a little oversimplified.

The reality is the graph here. It shows the same cats divided into four groups based on how much allergen they had in their coat. You can see that the top 25% have a lot more than the rest. You can also see that the actual levels vary for all of them week by week.

In fact, a look at the original paper shows that even these data points are averages of substantial individual variation.

Of course what matters most is how this translates to its effect on people. Is an average 47% reduction enough, and does the weekly variation make a difference?

To give Purina some credit, they could have stopped here, but they went on do do human trials. They exposed people affected by cat allergy to blankets from cats fed either a control food or LiveClear. The study was double-blind, meaning that neither the researchers or test subjects knew which was which.

In other words, a high-quality piece of work. Sadly for Purina and cat allergy sufferers everywhere, the results were disappointing.

The following table shows the P-values for each symptom. Values less than 0.05 are generally regarded as significant. As you can see, there were no significant differences between reaction levels to blankets from treated or untreated cats.

Hang On- Purina Said It Worked!

Actually, there were differences found when the results were compared with earlier known exposure (i.e. no longer blinded). This should be yet another demonstration of the enduring power of the placebo effect. And yet that’s not what was said.

While I honestly think that LiveClear will help some people, using an unblinded allergen exposure as a comparison is not the way to find the proof.

Well, you might say, if the subjects felt better, does it matter whether it was a placebo effect or not?* That’s an ethical discussion for another day. What we really need is a good blinded study using cats in their own homes to get closest to the real world scenario.

So Is Purina LiveClear Worth It?

The evidence so far suggests that Purina LiveClear is an unreliable way to reduce cat allergy symptoms in the home. I certainly would not recommend that allergic people plan on having cats based on this intervention alone.

Despite this, I applaud the company for such an innovative approach, and I’m not writing the food off completely either. For just as some cats will produce unacceptably high Fel 1 d levels, others are likely to respond well, especially combined with other approaches. You won’t know unless you try.

If you already live with a cat, but are allergic, or have an allergic partner, then there’s not a whole lot to lose. LiveClear is clearly as safe as any other cat or kitten food. If it doesn’t help, all you’ve done is bought a more expensive version!

Related: The Shaky Evidence For Feliway In Cats | Other Ways To Reduce Household Feline Allergens

* Strictly speaking, this is a nocebo effect, where the known allergen exposure is likely to have increased the subjects’ perception of symptoms. Then compared to the lower tested levels later, a significant difference appears. Clear? No, I didn’t think so!