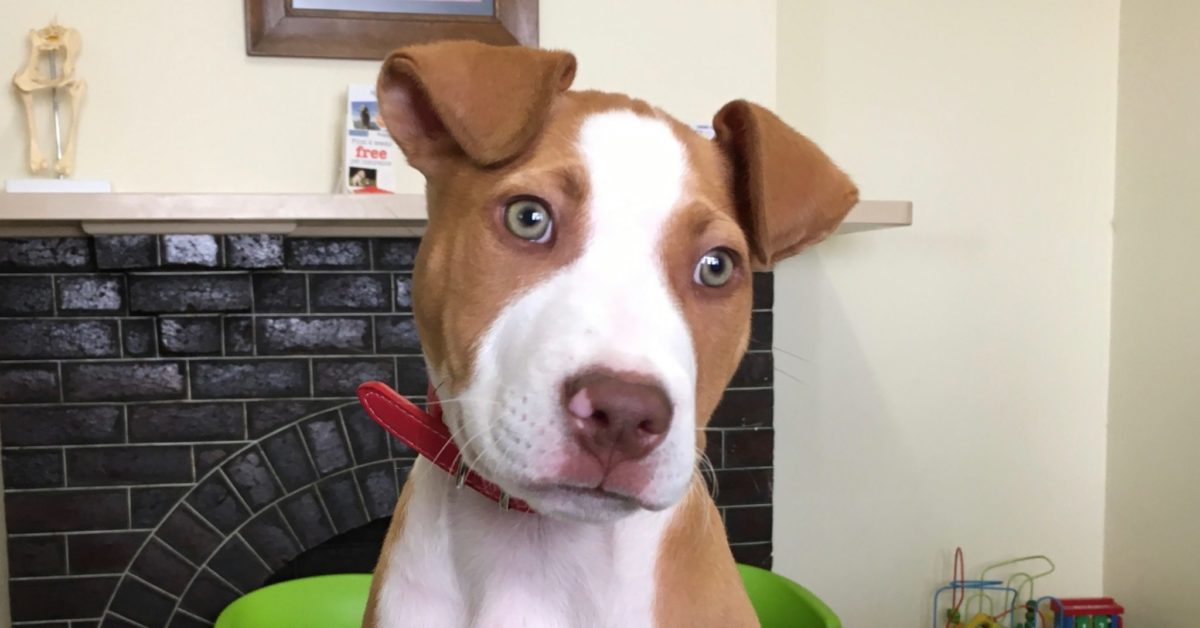 What do you think when you see a dog like this? Many people would say he’s not pretty, or pedigreed, and he probably doesn’t have too many fine manners. Of course we’d disagree. And more and more dog lovers are also seeing the rough diamond in these dogs.

I need to declare a conflict of interest: I love these dogs. They have an ‘old soul’ way of looking at the world that’s totally at odds with their reputation. Despite their size they love nothing more than to be near or on their favourite person for as much of the day as possible. Most of them would rather walk through the gates of hell than knowingly disobey their owners.

Maybe the Jack Russell Terrier owner in me just wants a rest.

Not that I get to see them much. I reckon along with working dogs they must be among the healthiest and least prone to the common illnesses of purebred dogs. Most of them just seem to visit me once a year for their annual checkup. That’s what you get for all that ‘outbreeding’.

Of course these are terrible generalisations, and you can be unlucky. Some dogs get atopic dermatitis, and others have behaviour problems like any breed. Inter-dog aggression is probably higher than average for example.

Why Did Staffy Crosses Have A Bad Name?

I think it’s mostly about the breed name. People would hear Staffy and think ‘aggressive’. There are two problems with this:

Thanks to recent DNA testing, we’re starting to realise that the so-called staffy cross is not what it seems. The tests we’ve done so far show very mixed origins with a low level of any particular breed.

It’s early days, but I’ll bet the more we look the more complicated it gets. Just like life!

No. Have a look at these dogs commonly confused with crossbreeds.

The tallest they get is 41 cm at the shoulder and weigh up to 17 kg. There’s really no obvious similarity in either size or build with the clients’ dogs we’ve featured in this article.

The Amstaff is like the Staffordshire Bull terrier but generally taller and heavier. Although these dogs superficially resemble some Staffie crosses, we’re seeing low percentages in our DNA tests.

These are fine dogs, but nothing like Staffie crosses.

The media don’t seem to know what a Pit Bull looks like. The breed is ‘prescribed’, meaning there are very strict rules on its ownership and breeding.

Whenever they want to talk about Pit Bulls they seem to use a photo of a Staffordshire Bull Terrier or a Staffie cross. Which only adds to the prejudice.

The photo shows what Pit Bulls generally look like, though you will see another picture of an American Pit Bull Terrier here. They resemble taller, long-legged and skinny Staffordshire Bull Terriers with a remarkably smooth coat. Of course this one has had something unspeakable done to the ears.

What Is A Staffie Cross Then?

It often seems that the dogs called ‘staffie crosses’ are the result of really just being labelled by their size and shape. The thick-headed dogs, mainly. I’m guilty of doing this as well but I’m trying to change.

Are we just giving in to a very human tendency to have to put a label on everything? Why can’t they just be dogs?

What if the dog we call a ‘staffy cross’ is actually just a version of the dog that’s been with us all along. The breed that exists under the radar, taken for granted, but always there being awesome. Just like moggies are in the cat world.

Maybe trying to fit them to any breed is the problem. Since the only thing they all have in common is a boofhead, perhaps we should call them the Australian Boofhead.

These aren’t my ideas; most rescue organisations are now either avoiding breed labels or making up their own.

Why These Dogs Need Homes

I think that a lot of the behavioural issues can be blamed on the terrible raw deal they often get. These are the dogs most likely to be surrendered to a shelter, the most likely to get parvovirus in our clinic, and generally the ones less likely to get what they need in terms of care and socialisation.

And the ones most likely to be on the other side of the wire in dog rescues and shelters.

The dogs that turn up in shelters and on rescue sites so often just don’t fit the desired breed for so many dog owners. This means many come away disappointed.

I can’t blame people: they aren’t for everyone. Their looks are definitely an acquired taste, and thanks to the media’s obsession with ‘pit bulls’, they get a lot of bad press. But I suspect more people would take them if they knew what they were really like.

If you see a dog called a Staffie cross and feel a connection, don’t ignore it. Check with the shelter about the history and known problems with that dog. Sit with him or her for a while and take the shelter’s advice on how to make the best assessment.

If things are still good, see if the shelter allows you to take dogs home on trial and don’t feel bad if it doesn’t work out. After all, you’re at least giving a needy dog a chance.

If you take that dog, a good dog training class is essential. These dogs are hard to walk if untrained, but then all dogs and owners benefit from training. Start with a checkup with your vet and follow their recommendations on where your dog would do best.

In the end, as we all know, it’s not the label on the box that matters. It’s what’s inside.