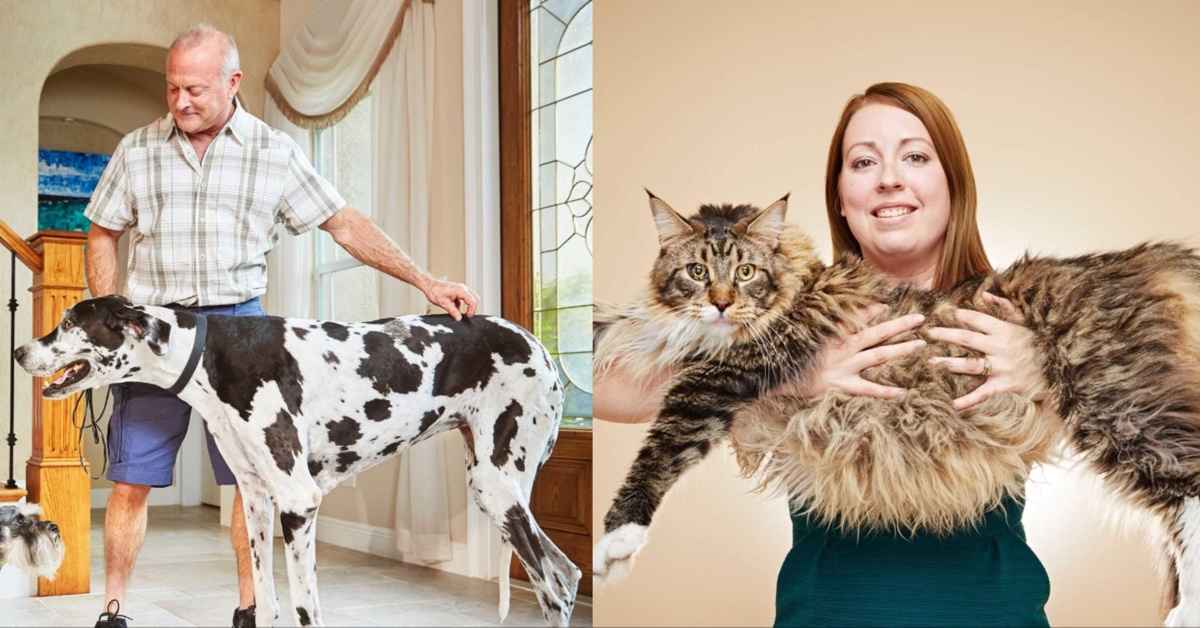 Did you see the animals in this year’s Guinness World Records? That’s two of them above.

The world’s longest living pet cat was a Maine Coon called Ludo, who is a phenomenal 118.3cm long.

Why do these cute facts make all vets shudder?

Here is what a Great Dane was once like. Once upon a time, Great Danes were just large hunting dogs. Then they got well known and the breed was quickly selected for certain features and larger size.

Below is a classic example of a modern Great Dane, like the ones we see here in Adelaide. He’s a fine specimen but he’s come a long way from how his breed began.

The increased height and deep, narrow chest are thought to be at least partly why they are now known for:

Bloat is now such a problem that many young Great Danes get a preventative gastropexy. This abdominal surgery attaches the stomach to the chest wall to stop it rotating.

I’ve said it before: giant breed dogs don’t age faster than other dogs, they die younger. Lifespan data for dog breeds show Great Danes live to only 6 to 8 years of age, versus 13 for cross breeds.

In fact, Zeus, the world’s tallest dog ever was a Great Dane that lived to only 5 years old. This should be a scandal, not a cute fact. I have no doubt (though it’s untested) that the taller we breed them, the shorter they’ll live on average.

Maine Coon cats have undergone a similar selection for size from when they were just large American barn cats to the gigantic cats that can be seen today.

Maine Coons are great cats, full of personality. However, just like in Great Danes, the story of their growth has been sad one for their health.

In fact, the world’s longest cat ever was a Maine Coon called Stewie that only lived to 8 years old. It’s appalling that no one is making the link between these lifespans and their size.

Breed standards set the guidelines that breeders and show judges use to select the best animals. Unlike for most dogs, the standard for Great Danes only sets a minimum height. The standard for Maine Coons does not specify size despite it being their obvious claim to fame.

The lack of a maximum height, weight or length means that breeders are encouraged to breed for more extreme and noteworthy individuals, whether to win shows or achieve success elsewhere. You’ve only got to look at the competitions for largest, tallest or longest pet to see how much it matters to people.

They are probably ignorant of the true cost of breeding animals for body shapes like these.

Breeding for single spectacular traits also means other, more important, traits like fitness and resistance to disease are being overlooked. I had the pleasure of watching the German Shorthaired Pointer judging at the Royal Adelaide Show this year. I enjoyed it so much because a big part of the judging was the dogs being run, and run, and run. You won’t easily hide a bad heart or hip dysplasia with testing like this. Is it any wonder this is a healthy breed?

What I say about Maine Coons and Great Danes could be said of many other cases of exaggerated features being selected by animal breeders. Here’s what I’ve said before about Shar Pei and Scottish Fold breeding practises. All these breeds are beautiful animals being treated unfairly. It’s up to us to say no to extremes.

One Reply to “Is Breeding Bigger Better?”