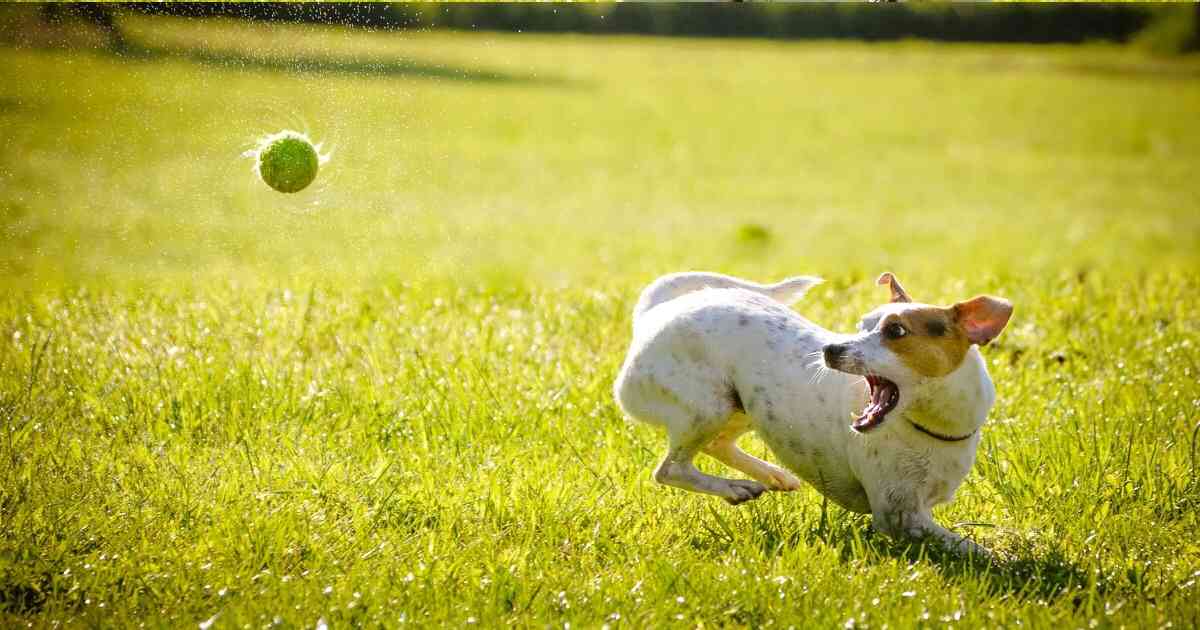 For many dogs, the highlight of their day is a game of fetch with the ball. Who can resist? You’d have to have a heart like a stone to say no. Or, like me, to know too much.

Stay with me while I show you five ways that tennis balls were made in the devil’s workshop. Afterwards, I’ll tell you how your dog can still have that fun without the risk.

What do I mean? Think about how wolves hunt: they chase their prey over long distances, tiring them out until they can bring them down easily. In other words, just like humans, dogs are built to be endurance athletes.

What dogs aren’t are natural gymnasts. Although they can easily outrun a cat over a long distance they aren’t as good at leaping, twisting or climbing. They lack the explosive spring and the natural flexibility of cats, who hunt by stealth. In modern exercise terms, cats are fast twitch, dogs are slow twitch.

When dogs chase tennis balls they suffer a lot of joint injuries. You’ve only got to look at the way dogs twist and jump, skid and turn to see why. Injuries like a fragmented coronoid process in a puppy can lead to permanent damage, whereas older dogs commonly have chronic carpal (wrist) sprains.

One of the most common causes of blunt trauma to the eyeball is the tennis ball. This happens when a dog runs into the path of a ball thrown for them or another dog in a busy park. The result can be internal bleeding, lens luxation, retinal detachment or even globe rupture.

That’s not the worst thing. The most common cause of collapse from heat exhaustion in dogs is playing fetch in the warm weather. It doesn’t even have to be that warm for dogs to overheat with vigorous exercise.

Dogs have been selected for thousands of years to work hard for humans, and they won’t suddenly stop now. The responsibility is with us to be their guardians.

I made the mistake with Loki of playing with tennis balls when he was young. Who can resist it when it’s so much fun for the dog? The problem is, it’s so much fun that all the other fun stops. For many dogs, they get so obsessed that when there’s a tennis ball around, nothing else matters. They even stop playing or socialising with other dogs.

This happens mostly with working breeds that are by nature a little fixated, like Border Collies, Cattle Dogs (Heelers), Kelpies and yes, Jack Russell Terriers. Loki wouldn’t even eat or go for a walk, let alone come for a pat, if he knew where one was. Great if you want a good ratter, not so good if you want a happy dog.

Then there’s the dental problem. Something about the fibrous coating of tennis balls causes persistent wear on the teeth, producing the characteristic flattened crowns shown. This effect is so reliable that when I see it I can predict with 100% accuracy that tennis balls are being chewed. Remarkably, this never happens with dogs that just chew bones.

If you’re like me you’ll find this video strangely compelling. It shows endoscopic removal of tennis ball fragments from the stomach of a dog. If these weren’t removed now, they probably would have gone on to block the intestine and cause a surgical emergency.

Tennis balls just aren’t up to the forces dogs create when they chew. Better to stick to these safer chew toys designed for dogs.

How To Play Fetch Safely

So spoilsport Andrew is saying that you shouldn’t play fetch with your dog and all fun is forbidden. Instead, here are some ways you can keep playing fetch games without doing so much damage.

Related: The danger when  dogs play with sticks