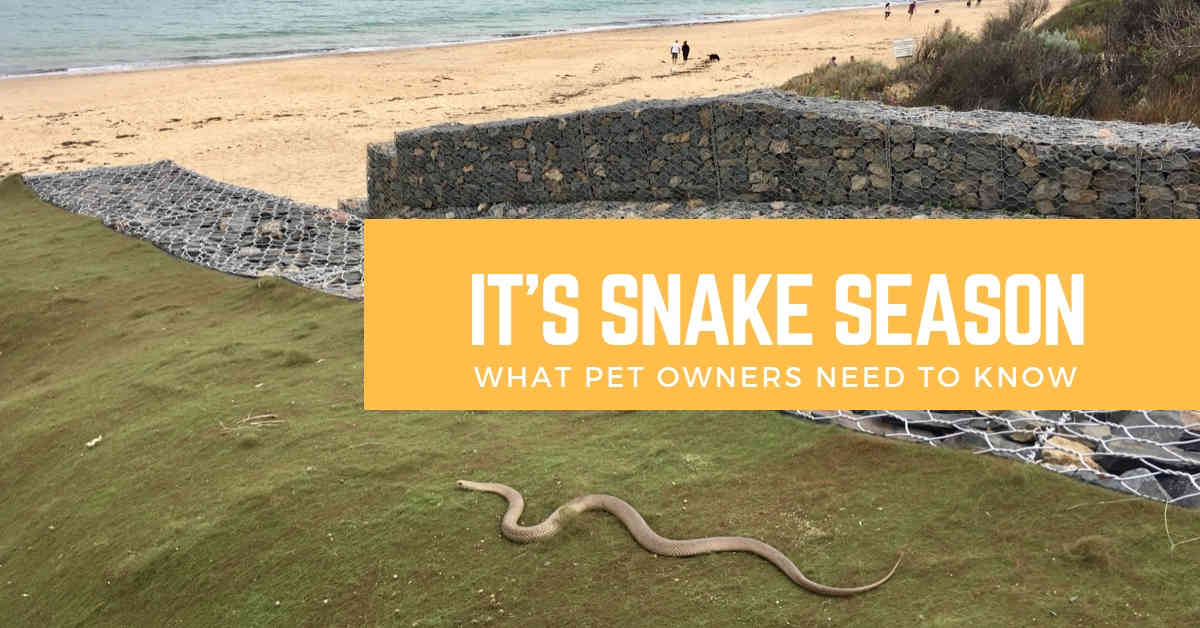 If A Dog Or Cat Is Bitten By A Snake

All Australian pet owners need to be snake-aware, even city-dwellers. I lost a beautiful dog to a snake, and I don’t want it to happen to you.

Here’s what you need to know to prevent and treat snake bite in dogs and cats.

Which Snakes Are Dangerous?

There are three groups of Aussie snakes that cause most bites:

In any region in Australia, there is usually only one snake that causes most of the problems. For us in southern Australia, that will be the Eastern Brown Snake. It’s not especially aggressive but will bite if cornered or attacked. I took the video quite safely as one crossed my path, but then I didn’t have a pet with me.

We also have the Red-bellied Black (below) found mostly near water, and Tiger Snakes in coastal areas.

Prevention of Snake Bite in Pets

Snakes will leave us alone if we leave them alone. Most like the quiet life as much as we do. They aren’t likely to bite your pets unless they have no other choice.

The same goes for whether certain dog breeds are more likely to ignore snakes. Although it is probably true, I think all show enough interest to be in danger.

Three types of snake venom cause different signs, depending on the snake species.

What does a snake bite look like? Signs are highly variable and include some of the following:

The links list other causes. There are important differences between cats and dogs:

Time is critical. If you see your pet near a snake, you must assume they’ve been bitten. My Ruby died in the car on the way to the local vet because we didn’t know she’d been bitten until the symptoms started.

I advise owners to come down so we can place a drip and give the necessary premedicants. Then we can start antivenom treatment instantly if we need to, like is happening for this cat who was brought to us paralysed.

Why don’t we give antivenom unless we’re sure?

Vets usually choose which antivenom to use based on local knowledge. For example, in my region, we only see Brown snake bites. However, in some areas, vets may need to do a test first or give a combined antivenin.

Other treatments may include intravenous fluids and respiratory support. It may take one to two weeks before a pet is fully recovered from snake bite but they can usually be sent home from hospital after one to two days.

Home Remedies Such As Vitamin C

Vitamin C is a popular home remedy for snake bite that was first used in North America. Its mode of action is thought to be by combating oxidative stress.

Even if it works for cytotoxic venoms of rattlesnakes or vipers (for which there is no evidence), Vitamin C has no place in the treatment of Australian snake bite. Most Australian snakes kill by the use of neurotoxins that cause paralysis. There is no conceivable way Vitamin C could interfere with such venom.

Any report of how a home snake bite remedy saved a dog or cat needs to be treated with scepticism. These were likely to be ‘dry’ bites that delivered little to no venom or from non-venomous snakes.

There’s no home treatment for snake bite but here’s what you can do on the way to the vet:

Most importantly, stay calm: it should be OK.