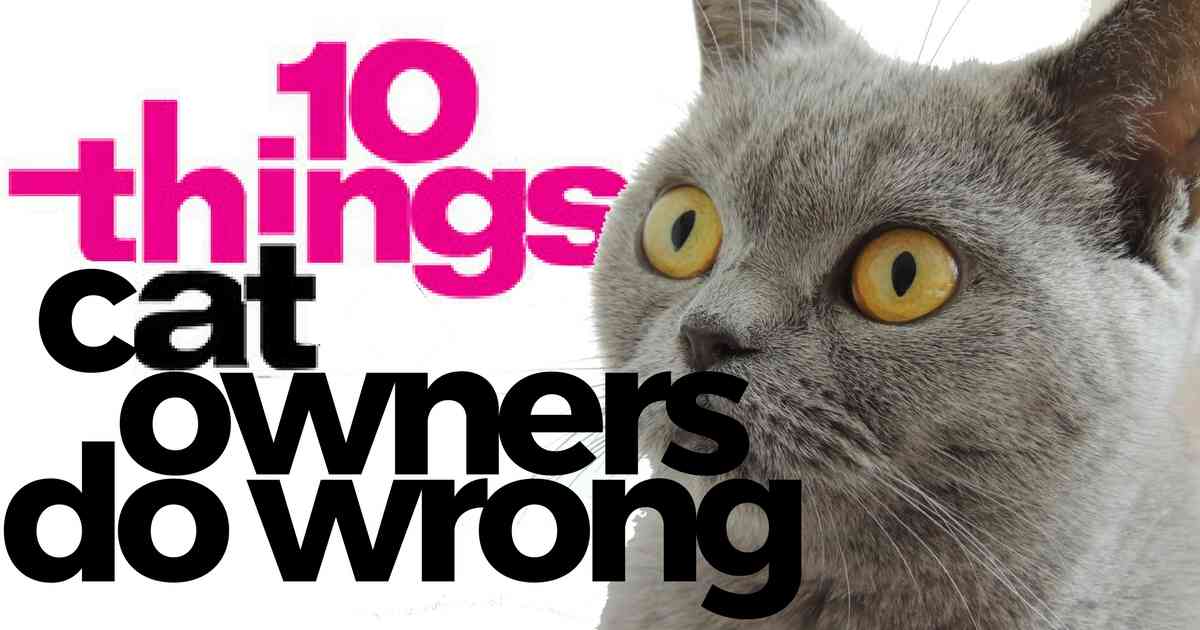 As a grumpy cat lover, I’m embarrassed to say what gets under my skin. It’s when a cat is so much fun to be around that someone says, “he’s like a dog.” Although it’s meant as high praise, to me it says a lot about how we risk seeing cats.

This is why cats are said to be ‘low maintenance’ when they are anything but. Yes, cats can tolerate solitude better, and don’t need as much training, but what about the things they need more? A lot of the time we don’t even recognise what those things are.

It’s the same way goats are said to ‘eat everything’ when in fact they just don’t eat the same things as sheep. Or the way rabbits are ‘easy pets’ when in fact they are possibly the hardest domestic animal to look after properly. Things we don’t understand fully always look simpler than things we do.

So here are the ten most common mistaken assumptions I see cat owners make. Getting these wrong can result not just in stressed, unhappy cats but also scratched and bitten owners. Who knows, the reason your cat isn’t as friendly as you hope may be found here!

Genetic mutation has given domestic cats a natural affinity to humans that not even total neglect can remove. Cats aren’t wildcats any more than dogs are wolves. Take any feral kitten in Australia, add TLC and, hey presto, the only thing ferocious is the purr. Even feral adult cats can become house cats.

Just like in people, personality varies, but an average cat is waiting at the door when you are due home, seeks you out and even prefers cuddles over food. We may joke that we are just slaves to our cats, but the reality is a complex, nuanced relationship.

Many cats I see with psychological or mental issues are simply starved of attention, but their owners don’t even know. Each cat varies, but most need a significant time each day in physical contact with a person. Some want ‘action play’ but most just prefer to sit or lie peacefully nearby. Which, by the way, is great for our blood pressure.

My previous cat, The Puss, needed people to the extent that she pulled her hair out if we didn’t spend enough time with her. That’s as good a cry for help as you ever get. You’ll also see this sort of ‘overgrooming’ or fur pulling with stress or boredom.

Dogs Are More Intelligent Than Cats

My ‘pet’ hate. How dare researchers design experiments using human intelligence and expect cats to perform the same as dogs. Dogs have a social learning environment much like people and the dice are therefore loaded in their favour. Design a test adapted for cat intelligence and see what happens now.

Doors and windows are a good example. Ask anyone who has both a cat and a dog which one worked out the latch first.

There isn’t one sort of intelligence any more than there’s one type of animal. What’s fun about cats is the unpredictable nature of their intelligence when viewed from ours. As in, “what’s that crazy cat doing now?”

You absolutely can train cats, just not like dogs most of the time. If you want to train a cat, the best way is to let them think it was their idea. Just like some people.

My cat comes when called (feeding kitty treats helps), and has a regular playdate when I get home (not sure who trained who here) but I haven’t tried anything else. Other cats I know are trained to use a human toilet, or fetch, or find certain things or toys.

I Can Stop My Cat Doing That

No, you can’t. Ignore all those websites claiming success and accept the reality of the cat. Even celebrate it if you can- loving cats means being selfless enough to accept a free spirit into your life, chaos, counter-surfing and all.

The best two things you can do to reduce problem behaviour are:

Click here for advice on getting cats to let you sleep in the morning.

A Squirt Of Water Is OK

Punishment is completely unacceptable to cats as much as it is to dogs. If it works, it will only be because you made your cat anxious when you are around. They just do not understand why you would do that. Punishment is only a ‘human’ concept.

Even worse is ‘scruffing’. No cat should be held by the scruff ever. Mum may have done it to her 3-week kittens, but it’s stressful and painful for adults.

Classic scenario: a couple come in with their cat. The husband complains that he’s getting attacked by the cat, and shows me the scratches and bites. The wife says she’s perfectly fine.

Aussie men love to roughhouse cats, and to some extent, the cats do enjoy it. However, be prepared for the play to get very rough and serious. These are predators with teeth and nails honed to perfection. Far better to play games using toys than hands.

Read more about stopping cats from biting and scratching here.

The biggest mistake I see is thinking that cats are always the same. Cats, as any cat lover knows, have moods. Sometimes they want cuddles, sometimes they are grumpy, and other times they are going to bite any hand that comes near them. Not out of spite, just because.

I hate to be callous, but it’s up to you to recognise the signs and back off when the time isn’t right. It goes back to cats being independent spirits. Just like us, they don’t always feel like doing something. When they do, at least you know they mean it.

If you asked cats, they would say it’s us who are unpredictable. The reason Grendel prefers my lap is that I never do anything like jumping up and shouting “goal”. He knows he can trust me. This, by the way, is why cats prefer people who ‘don’t like cats’; they are very still when a cat sits on them.

The other great difference between cats and dogs is territoriality. You and I don’t even know what it feels like to be so attached to a place. To a cat, territory is life and death, quite literally. Without it there’s only starvation and danger.

Territory needs to be safe and secure, and full of hiding places for time out. Think jungle. No cat likes wide open places. Food, water and litter need to be in places where your cat feels safe. House moves need to be done with great compassion and understanding of the trauma involved.

Anxiety is both a killer and a cause of significant suffering, but most people won’t see it. Many of its causes you’ve already heard: mismatches between what a cat needs and what they get. More than once I have seen anxiety in cats caused simply by ‘modern’ interior design.

If a cat feels that they can’t get away when they want, they are going to be more anxious and less affectionate all the time. It’s the same if a cat has to deal with threats from other cats, dogs, strangers or children. Ditto for house moves, punishment, neglect and impatient or rough owners.

Visit this page for information on safe and effective treatment of anxiety in cats.

So good luck and thanks for reading. I finish this as I started, with Grendel having forced his way between the laptop and the lap. Ah well, at least he’s happy.