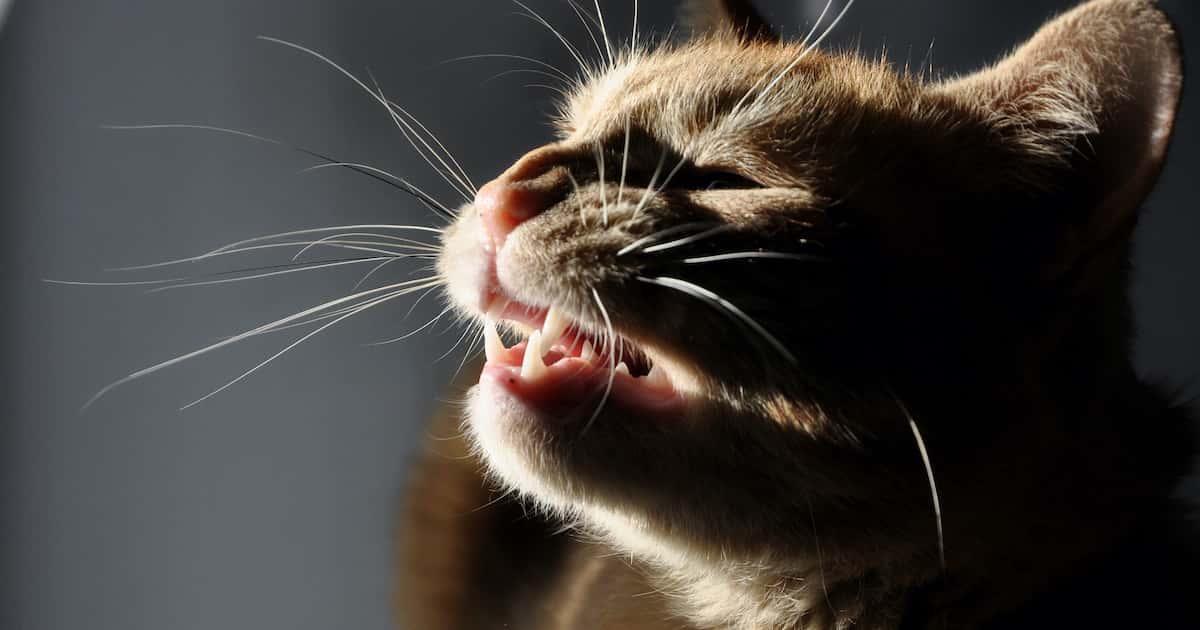 Here are the most common reasons why a cat might sneeze. As nearly every one is associated with a runny nose, there’s also a description of the nasal discharge that goes with it.

For each, there’s a suggestion of the best treatment.

Do Cats Get Colds?

One cause you won’t find here is the common cold.  Despite what you hear, cats just don’t get them.

Symptoms like sneezing, congestion, watery eyes or a runny nose are instead likely to be caused by one of the other problems on this list.

Causes Of Sneezing In Cats

Although there are many causes of sneezing in cats, the first is the only one that’s normal.

When something irritates the nasal lining, it triggers a sneeze. The aim is to expel material from inside the nose.

Examples of irritants are:

You’ll often see this type of sneezing after kitty just had to explore behind the shelves in the shed. Any discharge should be clear and bilateral.

While allergy is a common cause of hair loss in cats, it’s a rare cause of sneezing or a runny nose. When it does happen, it’s usually at the minor end of the spectrum.

Again, the discharge is clear and bilateral. I have found cyproheptadine (an antihistamine) to work best for these cats. However, most cats suspected of having allergic rhinitis actually have the next problem…

The most common cause of sneezing in cats is viral infection. In up to 90% of cases, this is caused by either of the two cat flu viruses.

Cat flu usually starts as a severe and acute upper respiratory infection in a kitten that you can read about here. However, most sneezing cats are carriers of a milder virus (read more at the link). In these cats, signs might include:

Treatment is usually supportive plus antibiotics as needed to prevent secondary infections. However, signs in most cases will stay mild if cats are well looked after.

Some cats infected with cat flu develop a post-viral condition called the snuffles or chronic snuffles. This is a lifelong condition believed to be caused by permanent damage to the structures in the nose and possibly altered immune function.

Affected cats have a thick, persistent nasal discharge and will sneeze yellow mucus frequently around the house. They can also have a hacking cough from the post nasal drip and get quite unwell at times. Treatment is mainly a combination of intermittent courses of antibiotics and steamy rooms or nebulisation to loosen the discharge.

Chlamydia psittaci is a separate bacterial infection that looks like a mild case of cat flu, with persistent sneezing and watery eyes. One common feature is the conjunctival swelling pictured but many kittens just show watery eyes and a runny nose.

Chlamydia is often seen in cats from shelters, and requires a long course of antibiotics to eliminate. It has no relation to human chlamydia.

Although better known in dogs, cats will also occasionally sniff up a grass seed in the garden. Signs are of distress and a sudden burst of violent sneezing. Grass seeds can’t go out backwards and need to be removed by your vet.

More commonly, a cat eating grass will vomit a blade into the nasal passages. It then lies through the nose from front to back, sometimes triggering both sneezing and coughing. Grass also rarely comes out by itself but is easily removed or flushed out under anaesthetic.

When the front teeth in the mouth get bad, the infection can push through the thin bone separating them from the nose. We call this an oronasal fistula.

Oronasal fistulas are a lot more common than realised because the tooth can look fine until it’s probed. This is just one of the reasons why anaesthetic free dentistry is only a cosmetic procedure.

If there’s any discharge, it’s yellow and unilateral.

Thankfully, fungal infections are rare, because they’re nasty and difficult to treat. Like tumours, they progress slowly and can cause facial deformities. The classic infection of cats is caused by Cryptococcus neoformans.

Symptoms include long-term sneezing and even neurological signs. Once diagnosed via a smear as pictured, treatment with antifungals is slow but usually successful.

Everyone’s fear is that the sneezing and nasal discharge are caused by a tumour. That fear is well-founded, as most nasal masses are malignant. Thankfully, tumours in the nose are one of the least likely reasons for sneezing.

The most common nasal cancer in cats is lymphoma, accounting for around 70% of cases. The discharge will usually be unilateral and blood-tinged. Treatment with fractionated radiation can extend survival times in most cases.

I’ll finish with a rare cause that’s almost unique to cats. Fleshy inflammatory growths can form in the nose, sinuses or middle ear and cause persistent sneezing. Polyps are most commonly seen in young cats.

Like tumours, they require examination under anaesthetic or CT scans to diagnose. The cause is unknown, but suspected to be related to ongoing middle ear or upper respiratory inflammation or infection.

The only treatment is removal.

Related: diagnostic tests for nasal diseases are described at our page on the causes of blood from the nose.

2 Replies to “Causes Of Sneezing In Cats”