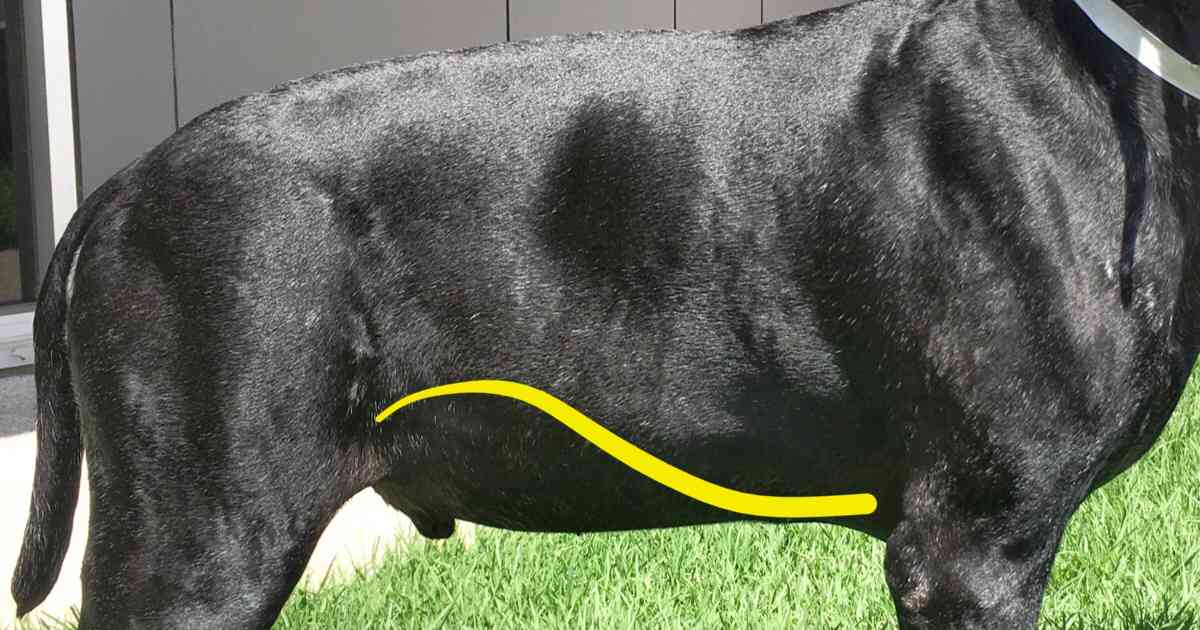 When Is A Swollen Belly An Emergency?

Dogs with any of these symptoms need to be taken to a vet immediately:

The picture above shows what a dog’s normal body shape should be.

Could it just be fat? The answer is usually ‘no’. Overweight dogs are so common that they look normal to most people. Therefore, trust your instincts: if the stomach looks odd, it’s almost certainly not just fat.

For example, the pictured dog isn’t fat anywhere else, and the belly hangs down more than it should. Even though he seems well, he’s in a lot of trouble.

Causes Of An Enlarged Abdomen

There are many reasons why the stomach gets bigger than normal. I’ll classify them by the cause of enlargement and start with the most serious. There are two special cases in puppies near the end.

Bloat or GDV occurs when the stomach suddenly twists and blocks the escape of gases. Gastric expansion follows, and without treatment dogs die a rapid and horrific death.

Affected dogs are usually large breeds with obvious distress and a hard, painful abdomen. If your dog is comfortable and eating or drinking, they don’t have bloat. You can read more about the causes and prevention of bloat here.

Sometimes a dog’s stomach swells up with gas for less serious reasons, like overeating. I saw one this week which happened with no obvious cause. These dogs need xrays to tell them apart from life-threatening cases of bloat, and to monitor the stomach size.

Abdominal pain makes dogs hold their belly stiff and tight like a drum. We call this splinting. You should always treat this sign as an emergency.

The most common cause is pancreatitis, which you can read about at the link. However, this is indistinguishable without testing from other causes of inflammation or infection, such as:

Internal bleeding can cause the belly to look bigger, however it’s rarely the most obvious sign. These dogs are also usually weak, pale, lethargic or even collapsed.

There are two common causes of abdominal bleeding:

It’s also very possible to have abdominal haemorrhage after any major surgery or injury. Obviously, whatever the reason, bleeding is always a critical emergency.

Damage anywhere in the urinary tract can cause urine to leak into the abdomen. The most common reasons for this are bladder stones blocking the urethra, and car accidents.

Like with bleeding, the amount of fluid is mostly small, and other more obvious signs of illness are present, like lethargy, straining or pain.

A classic and sometimes serious cause of bloated stomachs is when a dog biscuit bag is left out while you’re not at home. Most dogs will binge on the kibble until they can’t eat any more, then the kibble starts to swell as it takes on water. These dogs often need the vet to induce vomiting to relieve the distress.

In puppies, abdominal distension after eating is quite normal. As long as they are bright and playful, and it goes down in a few hours, there’s nothing to worry about. However, the next cause also needs consideration…

Intestinal worms are a very common and serious reason for a swollen stomach in a young puppy. Roundworms (pictured) often get large and numerous enough to swell the belly and block the passage of food.

Read all about preventing and treating intestinal worms here.

Many diseases cause the buildup of a clear fluid that we call a transudate. Most of these slowly worsen without any other major signs of illness. Examples might be:

The first four happen because the blood pressure in abdominal vessels gets high enough that fluid leakage occurs. Number 5 is simply because fluid often escapes from tumours with a high surface area.

Numbers 6 and 7 are probably the most common. They happen when blood proteins are being lost through the gut or via kidney disease. This leads to a drop in plasma oncotic pressure, which causes fluid to leak from small vessels. The fluid will also often be present in the chest cavity.

Testing is essential to identify and treat the cause. Often all of the following are needed:

The most common cause is inflammatory bowel disease as a consequence of protein-losing enteropathy. You can read about that here. As you can imagine, without treating the cause, drainage of the fluid is usually useless.

Even though fat deposition is unlikely, there are two diseases in which it is laid down in a way that can look like a swollen stomach. These are:

You can read about tests and treatment for both diseases at the links.

Sometimes a tumour in the abdomen can get so large that it causes the belly to noticeably bulge. These are usually slow-growing benign masses, otherwise they would have caused other signs earlier. Swelling can also occur when organs themselves become enlarged. Perhaps the most important are the liver and spleen.

Diagnosis requires blood testing and an ultrasound exam. Even large masses can often be removed if there is no evidence of spread.

Lastly and very rarely I have seen owners of a female dog not be aware of a mating 5 to 6 weeks earlier. In older un-desexed females, a uterine infection called pyometra or reproductive tract cancer can also swell the abdomen in a similar way.

These unplanned events should be a lot less common now that desexing has become compulsory in Adelaide.

I’ll end on a positive note. Despite some of the horrendous diseases mentioned here, most causes of abdominal enlargement that I see are the ones that can be treated, often with just a tablet. Therefore, don’t be frightened of getting the vet to take a look. It’s usually all for the better.

4 Replies to “Help! My Dog Has A Swollen Stomach”