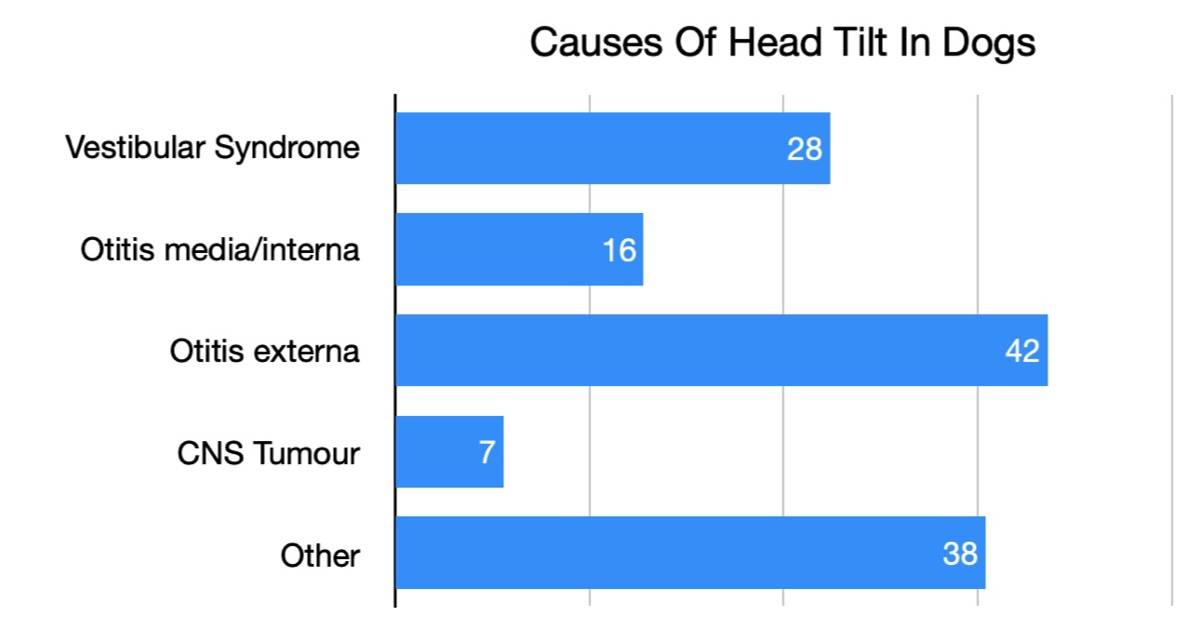 Some dogs you never forget. They are the ones you know you failed. Like Holly.

She came to me late one night for vestibular disease. And she certainly had all the classic signs:

It had been happening for two years, on and off, and she needed more of her medication. Except she really needed a whole lot more than that.

The truth when I explained it was too much for the owner to take. She decided I must be wrong, and I never saw her again. As far as I know, Holly never received the treatment she needed.

To understand why, you need to know why vestibular disease happens.

The Causes Of Vestibular Disease

The vestibular system is the organ that manages things like balance, head position and posture. It has two parts: one in the middle and inner ear (peripheral), and another in the brain (central). Anything that damages these areas causes the signs of head tilt and loss of balance.

Here are some of the more commonly reported causes:

So how common are these in everyday dogs? it’s very hard to tell, because most of the data we have comes from veterinary specialists who tend to see more of the rare things.

We looked at the 132 cases of head tilt from our own clinic over the last 15 years. Here’s what we found…

The Causes Of Head Tilt In Dogs

Notice that when you only look at the symptom of head tilt there are another three common causes: neck pain, focal seizure and otitis externa. Neck pain can cause a wry neck, or torticollis, just like people. Focal seizure is a poorly understood but mostly harmless episode. Otitis externa is an ear infection that doesn’t go through the ear drum. Read more about each at the links.

‘Other’ causes included no more than two of: stroke, shaker syndrome, hypothyroidism, MUO, toxicity, head trauma, labyrinthitis, low blood glucose and more that could not be classified. It’s important to note that some of these would also have been strokes and tumours if advanced imaging like MRI were available.

Now, finally we can get back to talking about the most common mistake, and Holly’s story.

The dog at the start was thought to have idiopathic vestibular syndrome but really she had otitis media. It’s an easy mistake to make, but the results are devastating. One is a painless condition that resolves by itself, the other causes unremitting pain, and only gets worse.

Idiopathic vestibular syndrome generally affects dogs over 10 years of age, comes on suddenly, and usually starts improving within 3 to 4 days. By four weeks most dogs are back to normal except for a slight head tilt in some. It then does not occur again on the same side.

No treatments have been shown to help, although we often give sedatives or anxiety medications to control any distress. The cause is unknown.

Otitis media and otitis interna are ear infections on the other side of the eardrum. Most of the time they started on the outside and spread through a ruptured eardrum.

Middle ear infections cause their signs by direct damage to the vestibular apparatus. They also often damage the facial and sympathetic nerves which travel close by. Therefore, middle ear disease as well as causing balance disorders, often causes a dropped lip from facial paralysis and a half-closed eye with a dilated pupil from Horners syndrome.

Which are all breeds known for getting ear infections.

Help! My Dog Has A Head Tilt

If your dog has a head tilt, it’s important to know how to tell the benign from the serious causes. Therefore, the first thing to do is get a check up with your vet.

A head tilt without vestibular signs is most often going to be caused by an external ear infection. It definitely needs treatment, but as long as this is done it’s a lot less serious.

A head tilt with vestibular signs will have the following breakdown according to our data*:

Here are some clues that your dog does not have idiopathic vestibular syndrome:

All this matters, because success rates with treatment of middle ear infections depend on how quickly you act.

I saw a case of otitis media just the other day (that’s why the numbers in the graphic and the table are different). I’m not at all worried about that dog. The symptoms had only been present for two days and the infection won’t have established itself yet.

He went on a combination of local treatments known to be safe when the eardrum is ruptured, plus systemic antibiotics. I’ll be amazed if he isn’t right as rain in a week or two.

The other side of the coin are dogs like Holly or Denver here. Dogs with long-standing middle or inner ear infections are usually incurable with medicines alone.

So if you’re interested, click here to read about the surgery that Holly needed, and Denver got. It made a world of difference to his quality of life.

* total number excludes otitis externa, neck pain, focal seizures and 10 cases classified in ‘other’ that had a head tilt only

2 Replies to “Help! My Dog’s Head Is Tilted To One Side”