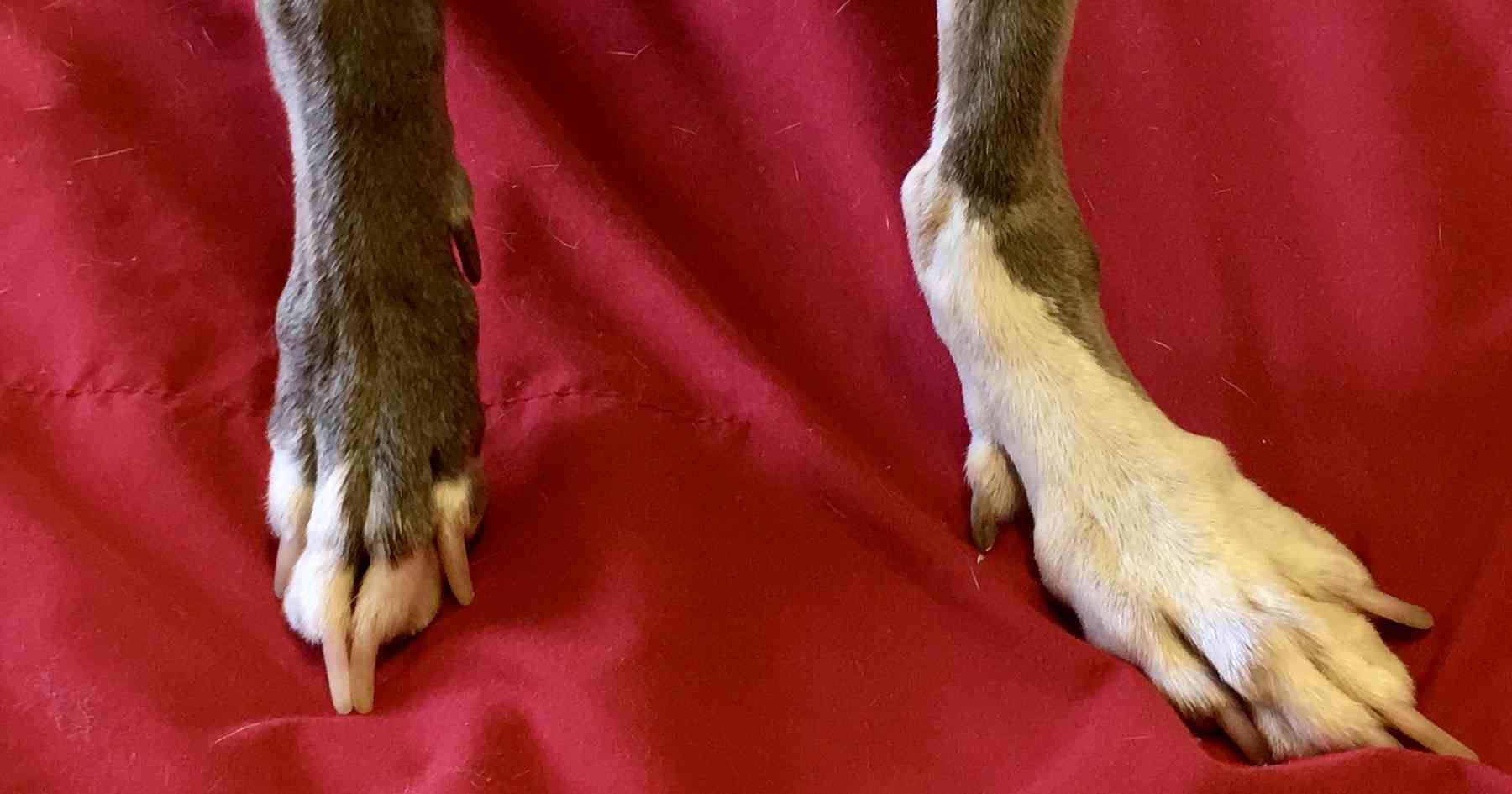 I’m deeply concerned by a fast-growing trend in puppy diets. In fact, I’d go so far as to say that puppy owners are being badly let down. It makes me angry and it should make them angry too.

New puppies at our Adelaide clinic are being set up to fail in numbers that I haven’t seen since the 1990’s. The consequences can be the permanent leg deformities you see in the picture.

Not for a second do I think anyone is taking these risks deliberately. We’ve just forgotten how bad it was.

Related: Is A Raw Diet Good For Puppies?

Oshi was probably the last time we saw it happen. She came to us as a young pup after falling down the stairs.

There was obviously something wrong with both of her front legs. X-rays taken at the time showed:

What a mess. Oshi was referred to a specialist who did the best possible job putting her back together. The one thing that couldn’t be fixed was the growth plate trauma. That’s why Oshi’s leg bends outwards and she bears weight on the side of the foot.

Pups have weak points in their bones called growth plates that can easily be fractured or crushed. Such injuries can be caused by accidents as simple as:

You can see two examples on our page of the common causes of limping in puppies.

But that only partly explains Oshi’s fractures. Five fractures at once don’t happen falling down the stairs, and they aren’t all involving growth plates. The clue is the folding fracture of the radius.

Oshi’s bones collapsed due to insufficient strength. It’s very likely that, just like most pups, if her bones had been strong she would have got up at the bottom of the stairs, shaken herself, and kept going.

As you’ve no doubt worked out by now, it’s all about the food. Oshi’s breeder sent her home on a diet deficient in calcium. Up to that time, it was common enough, but from then on, breeders collectively lifted their game and the problem almost went away.

Until now. Here’s a typical puppy diet from last week, and I quote:

Golly. Where to begin. I’ll start by making a list of the problems I see:

And that’s not all. The big one is still to come…

The owner of this puppy said the thing I always hear: “He’s eating the meat really well but I can’t get him to eat the dry food.”

These are the diets that set puppies up to fail. If we don’t change things fast, it’s Oshi all over again. It shouldn’t be our job to do this.

One of my pet hates is health professionals that create such complicated advice that when something goes wrong they can say, “if you’d just followed my advice it would have been OK.” That’s what’s happening with these diets almost every time.

The clear responsibility lies with the breeder to send the puppy home already eating a balanced diet. From now on I’ll talk about these in their dry form, called kibble.

I suspect that many of these puppies haven’t eaten any dry food at all. If you put out a mix of meat and dry biscuits to a litter of ten young puppies, what do you think is going to happen? What chance do you have of knowing if all of them are eating a balanced meal?

No one denies that puppies prefer meat to dog food, but that should never be the point. I don’t see parenting magazines saying that babies should be fed the foods they like over the foods they need. So why do it for puppies?

Honestly, I don’t understand it. While those puppies are suckling at the breeder, there’s all the time in the world to establish a balanced diet. I think it’s just that it’s a lot easier to start feeding meat, because the puppies will take to it faster.

Once those puppies leave the mother, we’ve got a new problem: how to get the puppy off the wrong diet without stopping them eating entirely.

How To Get Puppies Eating Dry Food

It may seem hopeless, but knowing four things makes it easier:

The last point needs explaining. Ignore advice that tells you to leave food out for only a certain time. You have to accept that your puppy will take one mouthful, see a shiny thing and get completely distracted. Here’s what I did with Loki:

At the beginning it could take hours but by six months he was polishing it off like a champion.

Transitioning To A Kibble Puppy Food

So let’s say you’re in the same boat as the owner whose puppy only eats meat. Here’s a plan of attack:

If the dry just isn’t being eaten, try soaking it in warm puppy milk or just warm water before mixing it thoroughly with the mince. You can keep doing this as long as you like, but as with the mince, you can gradually reduce the amount of water each day.

So is it a success when your puppy eats just dry food and water? Many vets would say yes. It certainly is a big improvement on a meat-based diet.

I would say “not quite”. I prefer the puppies I see to eat a little fresh fruit and vegetable with their dry, and I recommend starting raw bones early under supervision. But that’s just me. The big battle is already won.

But are you feeling just a little guilty that you took away the tastiest food? I perfectly understand how you feel; we all love our puppies and want them to be happy always.

Perhaps my favourite thought experiment will help. Imagine your dog is now old and has the power of speech. You ask “what was great about your life?”. Do you really think they’d say “the food”? Don’t sell yourself short- it’s you they want.

Love your puppy in every other way that you can. Just not with food choices; it’s you who needs to do the choosing. They’ll love you back anyway!

Now, one last thing…
We recently went to the Senate inquiry in Sydney on pet food safety. Click the picture to learn more.