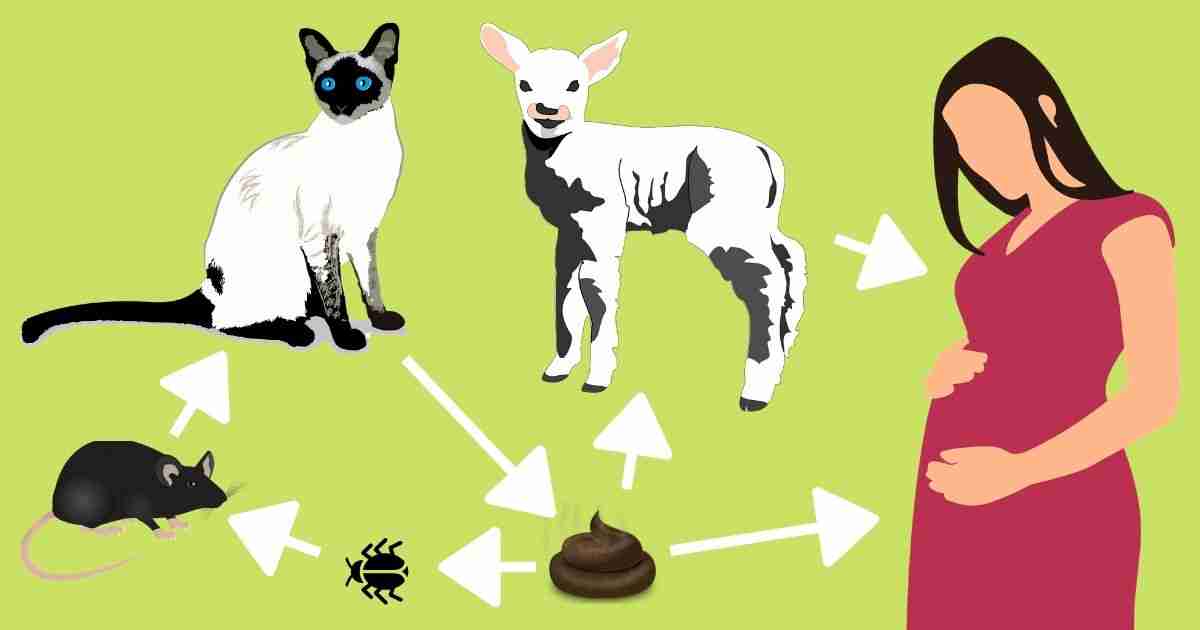 Any disease that can jump from pets to people is famous, and toxoplasmosis is no exception. But that does not mean everyone understands how it works.

Like how many cats get it and how they pass it on. Or how to stay safe, especially if you are pregnant. And the disease itself in cats and dogs. We cover all these here.

An understanding of the toxoplasma life cycle is essential to know how to prevent it in cats and people. The picture above, while a gross simplification, is a good place to start.

Toxoplasma gondii has basically two life cycles: one in cats that creates small egg-like oocysts, and one that creates tissue cysts in everyone else. It starts when an infected cat passes oocysts in their faeces into the environment.

These eggs can survive for months and end up being eaten by any variety of animals. In the new host, they hatch and multiply inside the cells until they form tissue cysts, especially in muscle and nervous tissue. There are three outcomes depending on the species involved:

How Common Is Toxo In Cats?

Thankfully, any individual cat is extremely unlikely to be passing oocysts or be capable of infecting humans. Large studies of German cats have shown that only around 0.25% of lab samples are positive for Toxoplasma, or one in 400.

Even infected cats are low risk due to their fastidious cleaning habits. In one study, eggs could not be detected on experimentally infected cats seven days after they were passing millions in their faeces. This may be why it has been shown repeatedly that having a cat is not a risk factor for getting toxoplasmosis.

How Humans Get Toxoplasma

There is strong evidence for two main modes of transmission:

A 2019 study right here in Adelaide found that the chance of toxoplasma being found in a portion of supermarket lamb mince was 43%. While we don’t have data for beef, pork, poultry, rabbit and kangaroo, we expect them to also be positive, but lower. It’s a simple fact that any animals that eat foods or graze pastures contaminated by cat faeces will regularly be infected.

How To Prevent Toxoplasmosis

Most humans who get toxoplasma will have few or no symptoms. However, if you are pregnant or have a weak immune system, the consequences could be devastating (see your doctor for more details).

You should do all of the following:

Additionally, the following are sensible guidelines for cat owners:

* As toxoplasma is killed by temperatures below minus 12 °C it is probably still safe to give chicken necks if they have been frozen first.

Toxoplasma can’t create eggs in dogs so there’s a very low risk of their faeces being hazardous unless they eat cat poo. Probably an equally low risk is dogs rolling in cat poo and having the eggs on their coat.

Clinical toxoplasmosis as a disease of dogs is exceedingly rare. When it occurs, it usually affects the nervous system with vague signs such as behavioural changes, tremors, weak legs, or paralysis. However, in a young dog, especially with muscle wastage, it’s more likely to be caused by another parasite called Neospora.

Help! My Cat Has Toxoplasmosis

Toxoplasmosis in cats is a very different disease, with the following possible symptoms:

Particularly at-risk groups are newborns, and cats who catch it after being immunosuppressed with cyclosporin or chemotherapy.

Diagnosis of Toxoplasmosis In Cats

The problem with such a range of possible symptoms is that almost any sick cat could have toxoplasmosis. This is made worse by the difficulty in getting an accurate diagnosis.

The only certain diagnosis is made by finding the actual organism in tissues or fluids. However, this is very difficult. Therefore, vets often make a tentative diagnosis if the cat has:

Treatment of toxoplasmosis is via a range of unusual drugs such as clindamycin, pyrimethamine, toltrazuril or fluconazole. None work very well in severely unwell cats.

Vets will often use clindamycin when toxo is suspected, just to be sure. But most of the time, the problem is probably being caused by something else.

That’s because actual illness caused by toxoplasma is rare. Just like humans, most cats who get toxoplasma show no signs, and make a rapid and full recovery.