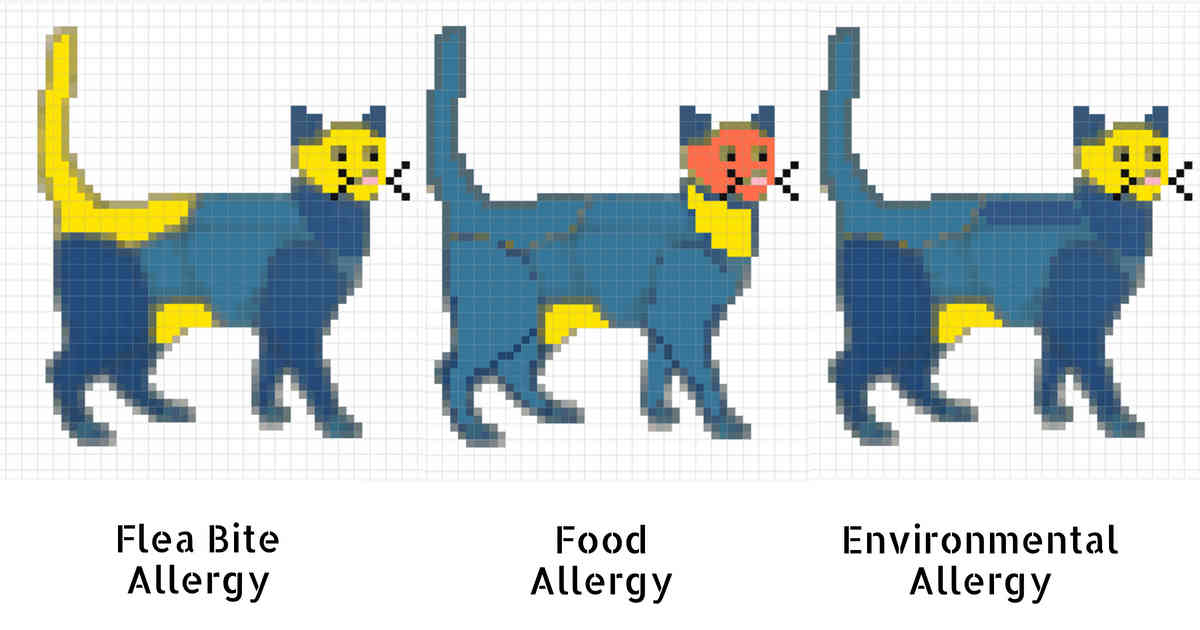 The use of Atopica® for dermatitis is a tale of two very different species: dogs and cats.  What was once a very useful drug in dogs has turned into an essential part of treating skin diseases in cats.

Now I use it far more in cats than dogs. Keep reading on to see why.

Atopica is a brand name of cyclosporin, which you’ll also see spelled cyclosporine, ciclosporine or ciclosporin. It’s a reasonably targeted immune suppressant that was first used in people having organ transplants. However, due to unpleasant side effects, it was never widely used elsewhere.

In dogs however, its release marked a watershed moment for veterinary medicine. Atopica was the first drug specifically licensed for atopic dermatitis, which until then had only been treated with prednisolone. For the first time, dogs could expect to get relief from constant itching without suffering excessive side effects.

Its greatest disadvantage was its cost. At the time I predicted a great future when it came off patent and became a cheaper generic. That never happened, partly due to the inherent high cost of manufacture, but mostly because no one saw what would happen next.

Atopica vs Apoquel In Dogs

Vets struggled on, treating atopy with cyclosporin for ten years. Then Apoquel came like a bolt out of the blue and almost overnight Atopica was forgotten. You can read about Apoquel here; most vets would agree that it:

Since then, Cytopoint also appeared, giving just one more reason not to use Atopica.

Nowadays, cyclosporin is mainly used for dogs with unusual immune-mediated or autoimmune diseases like:

And perhaps still for atopic dogs when Apoquel and Cytopoint don’t work.

Cats are a very different story. A poor cat suffering from allergic dermatitis still mostly only gets treated with prednisolone. That’s because Apoquel is unlicensed in cats, and Cytopoint being a dog antibody could cause a dangerous reaction.

Long term prednisolone use in cats puts them at risk of diabetes. So I was grateful when Elanco developed Atopica for cats, even though the economics must be marginal. It’s great to have a choice.

Uses for cyclosporin in cats include:

But cyclosporin isn’t a wonder drug. It has important drawbacks especially for cats.

(Note: this article gets quite technical from here so feel free to skip the rest unless you’re keen.)

The common side effects of cyclosporin in dogs and cats are listed below.

Most of the time, vomiting will improve over a few weeks if you keep using the drug. However, symptoms can be severe enough to need to stop the drug. Giving cyclosporin with food can decrease gastrointestinal adverse effects but may reduce absorption.

Additionally, the following side effects also occur at a lower rate:

Cancer is often discussed but it’s very hard to tell if cyclosporin changes what is already a very common problem. Cats however have one more very specific and important risk: opportunistic infection.

When cats are taking Atopica, their immune system is unable to defend them against certain common diseases.

Herpesvirus cat flu is one. A previously vaccinated cat is safe, but if an unprotected cat catches herpes, it could be fatal. Therefore we won’t use Atopica without prior vaccination. Future vaccination is safe but we avoid live vaccines.

FeLV and FIV are two others. Cats carrying these viruses should not be given cyclosporin so we always test them first. Then it’s a good idea to vaccinate or keep cats indoors to prevent future infection.

The greatest threat is Toxoplasma. If a cat acquires this parasite for the first time while on Atopica, it’s usually fatal. But as dramatic as this is, it can be prevented. Here’s how:

Cats are given an oral liquid which allows for accurate dosing. Cyclosporin is started at 7 mg/kg once a day with or without food until the skin improves, usually in 4-8 weeks. Then the dose is tapered to every second day or, when possible, to twice weekly.

Dogs receive Atopica capsules in either 10, 25, 50 or 100 mg. Cyclosporin is given on an empty stomach at 5 mg/kg once daily until improvement, typically for 4 to 6 weeks. After this, dose reduction is possible in around a half of dogs. Treatment is then trialled at every second day and if this also works, a further reduction to twice weekly is tried.

Thanks for making it to the end. You might also be interested in reading about the two related conditions, food allergy and flea allergy. The picture at the start shows how similar the patterns in cats are for these important skin problems. It’s just as hard in dogs.